In 2005 US marines were hit by a roadside bomb. The marines went on a crazed rampage and massacred 24 local civilians. The commanding officer Lt. Col. Jeffrey Chessani was the only person who was charged with any crime relating to the massacre and yesterday the charges against him were quietly dropped. 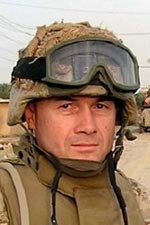 This is a clear message to the troops from the Obama regime that it is business as usual. No extra-judicial murders by soldiers will be prosecuted even in the rare cases when they are brought to light.

I'd like to send a clear message to Jeffrey Chessani too. You are a bit older than me, and your rank indicates a lifetime of achievement in the service of your country, something I can't claim. Have a look at what you have achieved though. You led a bunch of kiddy killers in a foriegn resource war. You covered up their unpunished crime only to retire on a fat pension. Some achievement. You know, last week the soldier most responsible for the My Lai massacre in Vietnam, Lt. William Calley, apologised for his slaughter after forty years. Like him, like every mass-murderer in a US uniform, we both know that you will never face trial. How about an apology though - how long before you can say sorry to the orphans and survivors of your crimes?

"We heard a big noise that woke us all up," she recalls two months later. "Then we did what we always do when there's an explosion: my father goes into his room with the Koran and prays that the family will be spared any harm." Eman says the rest of the family—her mother, grandfather, grandmother, two brothers, two aunts and two uncles—gathered in the living room. According to military officials familiar with the investigation, the Marines say they came under fire from the direction of the Waleed house immediately after being hit by the ied. A group of Marines headed toward the house. Eman says she "heard a lot of shooting, so none of us went outside. Besides, it was very early, and we were all wearing our nightclothes." When the Marines entered the house, they were shouting in English. "First, they went into my father's room, where he was reading the Koran," she claims, "and we heard shots." According to Eman, the Marines then entered the living room. "I couldn't see their faces very well—only their guns sticking into the doorway. I watched them shoot my grandfather, first in the chest and then in the head. Then they killed my granny." She claims the troops started firing toward the corner of the room where she and her younger brother Abdul Rahman, 8, were hiding; the other adults shielded the children from the bullets but died in the process. Eman says her leg was hit by a piece of metal and Abdul Rahman was shot near his shoulder. "We were lying there, bleeding, and it hurt so much. Afterward, some Iraqi soldiers came. They carried us in their arms. I was crying, shouting 'Why did you do this to our family?' And one Iraqi soldier tells me, 'We didn't do it. The Americans did.'"