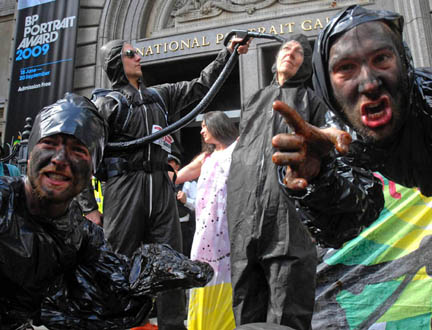 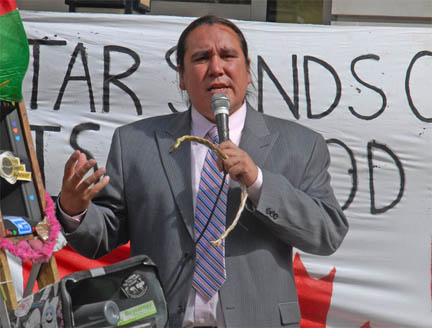 Clayton Thomas-Muller of the Indigenous Environmental Network outside BP's HQ 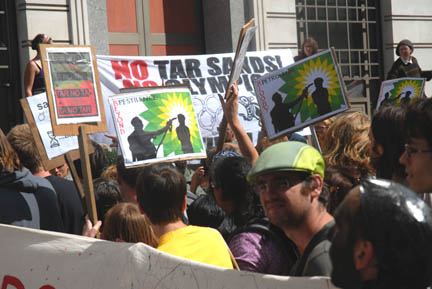 At least 300 people attended the demonstration at BP's London HQ

Climate Camp activists were yesterday joined by Indigenous people from Canada on an anti British Petroleum protest. Activists are concerned about BP’s involvement in a project to exploit tar sands in Alberta, Canada. They claim that this source of oil creates 3 times as much CO2 as does normal oil.

The march began at the National Gallery in Trafalgar Square. Campaigners claim that BP’s sponsorship of the National Gallery forms part of the company’s “Greenwash” strategy. Marchers moved onto the Canadian Embassy and then to BP’s London HQ, where members of The Indigenous Environmental Network addresses the protest. They gave a deeply moving and troublesome account of elevated levels of cancer in their communities, which they claim is being caused by the environmental impact of tar sand extraction.

Link to BP sponsorship of London 2012

Photo and filming opportunities on Tuesday September 1, 2009 from 11am at the North East corner of Trafalgar Square, press conference 12.30pm outside BP Headquarters, 1 St James’ Square. Photos of the day will also be available for publication by request.

Indigenous Canadian activists and a large number of Climate Campers will arrive in the centre of London on Tuesday morning to take action against BP and the Canadian government. The indigenous activists [1] have spent the week at the Camp for Climate Action on Blackheath, to expose BP’s role in the most destructive fossil fuel project on the planet.

The Tar Sands in Alberta, Canada, contain almost as much oil as Saudi Arabia, but this oil takes huge amounts of energy to extract, requiring the levelling of entire ancient forests, and creates toxic ponds so vast they are visible from space [2]. The pollution from this project – which is the largest industrial development in the world, spanning an area larger than England – is poisoning the land and water of the local indigenous people, who are now dying from rare forms of cancer.

”Canada and Alberta have consistently dismissed claims by my community of Fort Chipewyan, despite a cancer study in 2009 that confirmed elevated levels of rare cancers,” said George Poitras, former Chief of the Mikisew Cree First Nation. “The response, or lack of, by the Canadian government and its partners in the Tar Sands industry is irreprehensible. Anyone who approves or invests in Canada’s Tar Sands is contributing to current life and death situations in my community.”

Oil from Tar Sands produces three to five times as much global warming pollution per barrel as conventional oil. If all the oil in the Tar Sands were burned, it would tip us over the edge into runaway climate chaos. Although the project is based in Canada, British-based companies are heavily involved [3].

Jess Worth, from the Camp for Climate Action, said: “Having abandoned the pretence of being “green”, BP is poised to dive headfirst into the toxic Tar Sands. They will make the decision in the next six months as to whether to go ahead with the massive Sunrise Tar Sands project in Alberta. We’ve been shocked, moved and inspired by the time we’ve spent with George and Lionel, whose communities are being ripped apart by this desperate rush for dirty oil. It is our responsibility as British residents to make sure that BP drops the disastrous Sunrise project.” [4]

The indigenous activists and their new UK allies will set off from the Climate Camp [5] at 10am. They will arrive at the North East corner of Trafalgar Square at 11am. They will start their “Tar Sands Tour” of London outside the National Portrait Gallery, which is heavily sponsored by BP. They will then go to the Canadian Embassy to “shame Canada” for its enthusiastic support for