Locals have disrupted a car rally passing through a sensitive wildlife area of Australia. 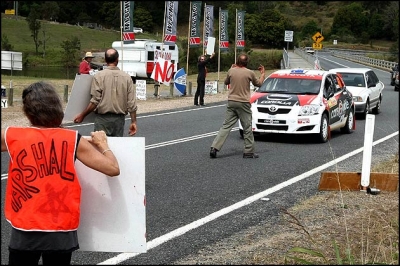 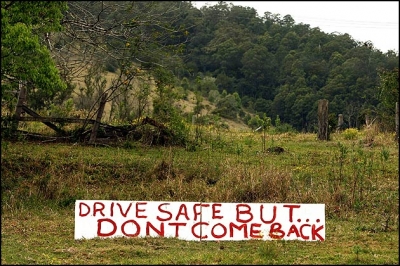 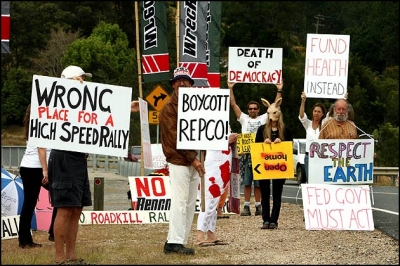 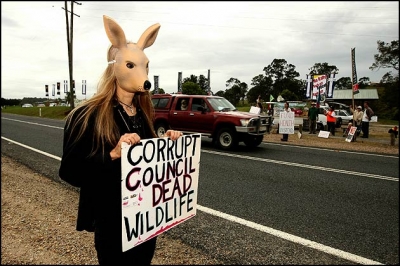 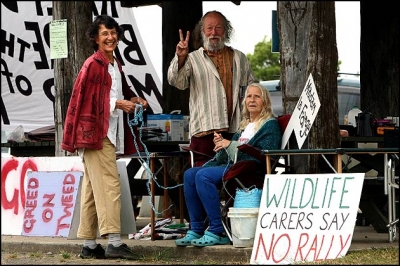 Locals have disrupted Stage 1 of the Repco Car Rally, a key stage of the World Rally Championship, by pulling down fences, letting cattle onto the track, putting rocks on the track, laying on the track. Their actions have forced the rally to be abandoned.

What has so incensed the locals and those further afield is that the rally was staged to pass through a highly sensitive wildlife area. The rally organisers have been condemned for an event that would have damaged the environment and frightened the wildlife.

for the next twenty years

The rally is not a one off. The event has been enabled by the NSW Motor Sports (WRC) Bill 2009, which overrode 12 different planning, environmental protection and heritage laws and removed all right of appeal!

As a result of secret back room deals it was announced in September 2008 by Events NSW (an arm of the New South Wales government) that Repco Rally Australia would run the Australian leg of the World Rally Championships in the Tweed Valley and Kyogle areas in 2009 and every second year to 2017 (with the option of a 10 year extension).

The NSW government has introduced, at the request of the Paris-based FIA, "special legislation" that takes away from local Councils the power to approve or reject the proposed Repco Rally Australia.

The legislation overrides many state laws designed to protect the environment and local communities:

The legislation allows the Minister to delegate any of his functions under the Act (except the power to delegate) to any NSW public servant or Council employee - and they are immune from challenge or complaint for their actions!

The legislation also gives unwarranted indemnity to public servants for anything they do in organising the rally - even for deliberate breaches this law or denial of natural justice.

The legislation is a direct attack on local decision making and our democratic rights.

This region now under threat has been recently included in The Federal Governments 'National Landscapes Program' along with Kakadu, Uluru and other national iconic landscapes.

'The Green Cauldron', as it is now offically named, has the second (to Daintree) greatest biodiversity of any area in Australia. It is promoted to tourists as an environmentally sensitive "green" place. People live here because of these features. The proposed car rally is inconsistent with these moves to develop a thriving eco-tourism industry which will provide long-term sustainable growth and real employment.

If the car rally gets the green light it means:

• native animals will be at risk (interrupted breeding cycle, stress related death, hit by cars, etc)
• national parks will be used for racing at speeds in excess of 160 km/hr
• cars will speeding on gravel and dirt roads in the area
• roads will be closed in the area - affecting resident access
• dirt roads will be left as they are
(means you can forget about your road being sealed for the next 20 years because of pressure
from rally organisers to keep the roads suitable for their use)
• dangerous driving will increase placing local people and wildlife at risk
• secret back room deals will take precedence over local wishes
• the long term prospects for developing a sustainable eco-tourism industry will be placed at risk.