Last month the Home Office announced that the National Identity Card Scheme would no longer be compulsory and that implementation would be delayed until 2011 or 2012. Online magazine The Register has, however, uncovered proposals to merge the National Identity Register with Criminal Records Bureau background checks, potentially forcing millions of people into ‘applying' for an Identity card that they neither want nor need in order to avoid facing unemployment. 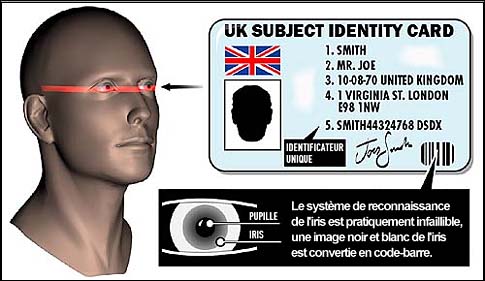 Under the new proposals potentially 11 million citizens working in schools, hospitals, care homes etc will be required to register with the CRB brother organisation the Independent Safeguarding Authority. An ‘enhanced' CRB check could soon return police intelligence information, listing mere suspicions and unsupported allegations. Unlike an erroneous criminal record disclosure, there is no real way of challenging police suspicions and allegations. If proposals go ahead as planned, millions of people (many of whom are innocent of any crime) could have a police record linked to their ID card. Employers could turn down applicants or sack employees based solely on suspicions. Judging people on the mistakes of their past is one thing, but to judge someone on unsupported allegations that they have no means of defending inexcusable.

In many cases there are people who have past convictions and have completely turned their lives around. Is it fair to deny people employment because of mistakes they made many years ago? As Mark Johnson points out, his criminal past and his achievements since have given him a "special rapport with excluded and offending teenagers." Mark points out that "drug treatment centres are largely staffed by individuals who understand the clients because they've been there themselves. But, like me, they mostly have the kind of background that would make the ISA throw up its hands in horror."

Of course the CRB are spinning the process, claiming the purpose is to protect children and prevent more Ian Huntley types from obtaining jobs around vulnerable people. Whilst I don't doubt that there are valid reasons for such a scheme, first and foremost our rights must be protected and it is when we sacrifice our rights and freedoms to fears of terrorism, terrorists, or the paedophile supposedly lurking round the corner, that we become the founders of the tyranny and oppression that our future generations will be forced to face. Is this really protecting children?

Fear of people, whether it be terrorists, paedophiles or immigrants, is rarely rational. Millions stand to be affected by this system, yet very few will pose any risk to children, the elderly or society for that matter. The Home Office are looking for more and more reasons to expand the database state, feeding on the fear of terrorists, immigrants and now paedophiles.

The CRB is already struggling to handle the current system properly, with the number of CRB errors in mistaken identity on the rise. The new systems will no doubt be significantly larger, yet they expect us to believe that very few errors will be encountered.

The Home Office are still pushing ahead with ID cards, despite public support for ID cards and the National Identity Register plummeting. A recent Liberty-YouGov opinion poll found that "68% of those polled thought that the Government and public services already hold too much personal information and that the Government has not presented a strong enough case for the cards or register to justify their costs". Crucially, whilst the Government now claims this is a voluntary scheme, as much as 60% of the sample said they would "probably or definitely not volunteer for an ID card."

Whilst Identity cards and the National Identity Register may be scrapped by an incoming Tory government, Government bodies are continuing to expand the database state. Whilst many may now oppose ID cards, and despite the excellent efforts of NO2ID and others, there is still a lack of widespread and informed opposition to other aspects of the database state.