Washington Refuses to Call Off Its Dogs in Honduras

"While President Obama issues vacuous statements claiming to support the general principle of electoral democracy, his own State Department officials blame President Zelaya for provoking the coup.” Nobody in Latin American believes the U.S. is not complicit. 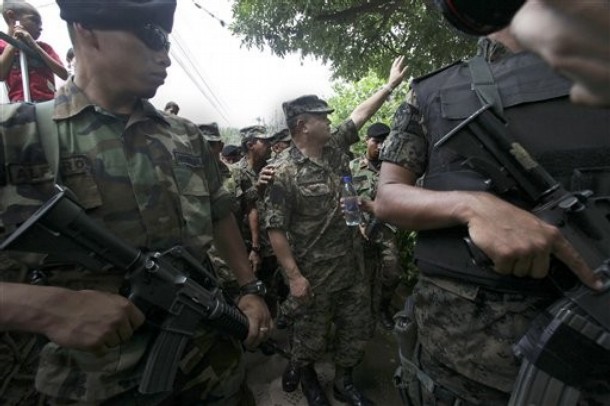 
“Washington has bought time for its Honduran puppets.”

The “new face” of U.S. policy in Latin America is just that: a face, a false front. Barack Obama's famous smile is a Greek mask, behind which lurks the same old Uncle Sam that plunged nearly all of Latin America into military and oligarchic rule in the period following World War Two.

The U.S. is trying to run out the clock on Honduras's democratically elected president, Manuel Zelaya, ousted in a June 28 coup that could not have happened without Washington's approval and ongoing support. The U.S. is the only country in the Western Hemisphere that continues to maintain an ambassador in the Honduran capital, Tegucigalpa. The American ambassador's purpose there, is to hold the hands of the Honduran generals, to assure them that Uncle Sam has their back. While President Obama issues vacuous statements claiming to support the general principle of electoral democracy, his own State Department officials blame President Zelaya for provoking the coup by exploring the possibility of a referendum by the people on a second presidential term.

Obama seeks plausible deniability for that which is undeniable: U.S. complicity in Zelaya’s ouster. No one in Latin America is fooled. The airplane that was used to kidnap President Zelaya and deposit him in nearby Costa Rica, first dutifully stopped at the airbase in Soto Cano – a facility that is as much a U.S. base as a Honduran one. The U.S. relationship to the Honduran military is like that of a father and child. There may be no purer annex and creation of the U.S. military than the Honduran officer corps, which is led almost entirely by men trained at Fort Benning’s School of the Americas, sometimes called the “School of Coups” or “School of Assassins.” The generals and oligarchs that carried out the coup have literally no reason for existence aside from service to U.S. neocolonialism, without which they would be swept away.

“The U.S. relationship to the Honduran military is like that of a father and child.”
Through the most cynical maneuvers and double-speak, Washington has bought time for its Honduran puppets, wearing down Zelaya's domestic popular forces despite their daily demonstrations as time runs out on his presidency, due to expire in January. If the military is still in charge on the ground in November – which is clearly the plan – then scheduled elections can be rigged or cancelled. The coup will have been a fait accompli, despite Obama's lame protestations that Washington had nothing to do with it.

This sends a very loud message to the rest of Latin America's elected leaders; it tells them that a nod from the U.S. ambassador can still bring instant exile, even death. It is a powerful warning to keep one's distance from Venezuela, Nicaragua, El Salvador, Bolivia, Ecuador and other nations that are forging an independent political and economic path.

President Obama had the gall to describe as “hypocrites” those who urge the U.S. to exert real pressure of the Honduran coup-makers. “The same critics who say that the United States has not intervened enough in Honduras,” said Obama, “are the same people who say that we're always intervening and the Yankees need to get out of Latin America.” But there is no contraction. Everybody knows the Honduran generals are Washington's dogs. Obama needs to call his dogs off.