Football fans at a match in Adana between the local team and an Italian one opened a banner calling for a political prisoner dying of cancer to be released. They were attacked by the police. 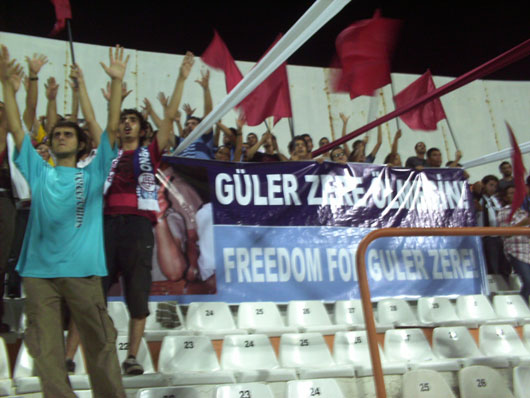 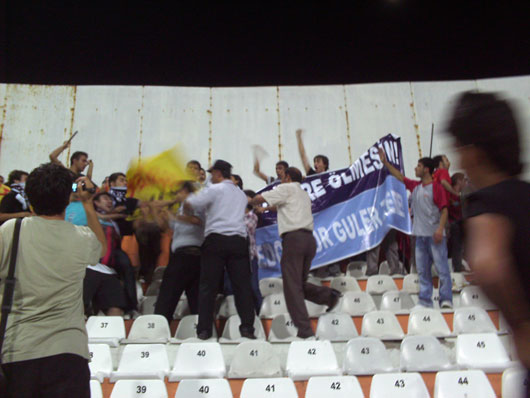 Attempt to remove the banner 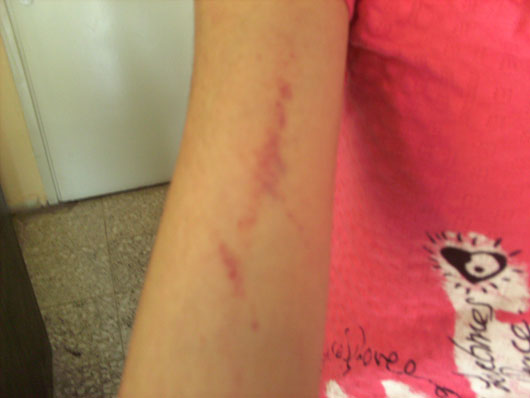 
On the evening of September 4, in Adana, a southern industrial city in Turkey, a “historic” football match took place between the local team Adana Demirspor and the Italian team AS Livorno.

The match ended with the score nil-nil, but even if it had been different, “proletarian internationalism” would still have been the real winner. Also in the stands, the Italian partisan song “Bella Ciao” could be heard, in both Turkish and Italian, and the atmosphere was warm and friendly throughout the match.
A banner in the colours of Adana Demirspor carried the picture of Guler Zere and it was written "GULER MUST NOT DIE - FREEDOM FOR GULER ZERE".
Just half an hour before the start of the match, the security personnel asked them to remove the banner. The security went away after the crowd said that they won't remove the banner. At that moment the MHP (far right wing Party of Nationalist Movement) mayor Aytac Durak entered the stadium and was barracked and people protested against him with the slogan "Go away, Aytac Durak, servant of fascism!".
With the start of the march, a youth group called "Ekim Gencligi" ("October Youth") opened a banner writing "The youth is the future, the future is socialism" next to Guler Zere's banner.

While the match continued without any troubles plainclothes police officers started to gather around the security personnel and they tried to spoil the atmosphere by attacking supporters of Adana Demirspor who opened banners supporting the political prisoner Guler Zere. (See photos.)

The private security personnel said "we understand you, we also don't want Guler to die" and they continued "go away from here, let those persons come who have sent you here".
Private security, with police, intervened, saying they had to take the banner on orders from the security department. Plainclothes police tried to incite supporters by cursing and saying, "They are terrorists!"
Reacting to the attack, people in the stands chanted, "Shoulder to shoulder against fascism!" The private security could not handle the situation, fled, and riot police entered the stadium and started using truncheons and gas against Guler Zere supporters.
Three supporters of Adana Demirspor were arrested following the police attack. One, a youth named Umut Mayda, was told by police trying to get him to inform on others that "you won't get a beating if you tell us what they said to you in the association". Three fascists also assaulted association member Evrim Sahin as he left the stadium.
"Freedom for Guler Zere" was shouted by fans as the match ended and all fans also sang revolutionary marches, taking their cue from members of left-wing organisations present.
Those detained at the police station were released during the night.
(source: Halkinsesi TV)


***
Background of the football teams

In the moneyed, racist and mafia atmosphere of football, AS Livorno is an exception. In the city where the legendary Italian Communist leader Antonio Gramsci was born, it is not unusual for fans in the stands to display Che Guevara flags. It is also not unusual for them to wear “Stalingrad 43” T-shirts, marking the city where the tide of the war turned against the troops of both Hitler and Mussolini. In November 2003, fans of Livorno refused to observe a minute’s silence for 19 Italian soldiers killed in US service in Nassiriya, Iraq, and even chanted, “10, 100, 1,000 Nassiriyas!” More recently, when the Israelis were bombarding Gaza, fans of Livorno burned Israeli flags in solidarity with the Palestinians.

Adana Demirspor was originally established by railway workers and is based in a city which once had a population of many thousands of Armenians, before they were deported and slaughtered during World War I.

Nonetheless, it remains a multi-ethnic city with Turks, Kurds, Turkmens, Arabs and Circassians, a counter-culture also visible among the fans. Like Livorno fans, they favour red flags with the picture of Che Guevara and also like the music of the left-wing band Grup Yorum.

After the Turkish-Armenian journalist Hrant Dink was murdered in January 2007, Adana Demirspor fans chanted “We are all Hrant Dink. We are all Armenians!”

When the team played the team from Trabzon, a more right-wing city that was home to Ogun Samast, Dink’s murderer, Adana Demirspor fans made a play on the name Ogun, which means “that day” in Turkish. They chanted, “The Oguns (these days) belong to you, the following days will belong to us!”