Disarm DSEi Map of the City of London 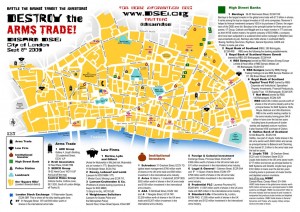 Download, view and print our map of the arms dealers, their lawyers, investors and bankers in the City of London.

Defence Systems Equipment International (DSEi)—the world’s largest arms fair—is due to take place in East London between 8 and 11 September 2009. At DSEi 2007, there were 1352 exhibitors from 40 different countries with a total of 26,5000 visitors.

Disarm DSEi will be meeting at 12 noon on Tuesday 8th September outside the Royal Bank of Scotland on Whitechapel High Street, near Aldgate East Tube, before going on to visit several companies in the City of London that invest in the arms trade. Bring post-it notes to write messages exposing these investors, and shoes, the symbolic object of protest popularized in December by Iraqi journalist Muntadhar al-Zaidi, who threw his shoes at George W. Bush.

The recent devastation in Gaza was aided by UK arms sales of over £27 million in the first 9 months of 2008. Ewa Jasiewicz, a human rights worker in Gaza during the bombardment advocated taking our fight against this “from the streets into the offices, factories and headquarters, to the heart of the companies making a killing”.

According to UNICEF, two million children were killed between 1986 and 1996 as a result of armed conflict. A further six million were also injured or permanently disabled and countless others were forced to witness or take part in violence.

Graça Machel, the author of the report, also recently stated that “wars have always victimised children and other non-combatants, but modern wars are exploiting, maiming and killing children more callously and more systematically than ever.”

Politicians pay lip service to controlling the arms trade by introducing piecemeal legislation. Meanwhile, business is booming. The UK company, Chemring, saw a 500% rise in profit in the four year period following the Iraq invasion, and instances such as ex MP Michael Portillo serving on the board of BAE Systems show self interest and profit triumphing over any concern for ethics or morality.

The arms trade and the military industrial complex it supports – along with many other struggles – should not be seen as a single issue campaign. For example:

* The majority of asylum seekers have fled because of the effects of war and the arms trade. However, in locking these people up, and labelling them as scroungers, the government conveniently ignores the huge profits made by the UK companies who made the weapons which destroyed their homelands.

* The military are climate criminals responsible for 25% of air pollution. In 2006, according to Scientists for Global Responsibility, the UK military as a whole was responsible for emitting 5 million tonnes of carbon dioxide. Furthermore, a report from the Royal Commission on Environmental Pollution into aircraft emissions in 2002 stated that “the performance requirements of military aircraft suggest that compared to civil aircraft, they are likely to produce proportionately more emissions”.

* Animal testing plays a major role in military research. In 2006, there were more than 21,000 animals, including monkeys, ferrets and pigs being subjected to experimentation at Porton Down. This was a 76% increase from 2000. Tests include applying fatal doses of a nerve agent to an animal’s skin, and giving sarin and anthrax to primates.

However, the bankers, the investors, are the glue which bind all these issues together. High street banks invest billions in the arms trade, as well as supporting the corporations who profit from environmental destruction, attacks on migrants and animal torture. Given these banks invest in global death, destruction and displacement, their reluctance to help the average worker facing redundancy and repossession is unsurprising.

The banks are only interested in profit. They invest willingly in the international arms trade, caring little about the consequences either for the victims of war, or UK workers. Heavy investment in ‘high risk’ arms sales to Africa, Asia and the Middle East is just another gamble with our own economy, all for the sake of hefty bonuses and over inflated pensions.

DISARM DSEi are calling for people to join together to unstick these institutions, expose the devastation they cause, and hold them to account for their actions.

Come to The City with love and rage; music and militancy; desire and determination—together we can show we will no longer tolerate the death and destruction they cause.