Climate camp was something of a surreal experience after the aggressive policing and constant stop and searches of previous camps. There can be no denying that the public order cops were on the back foot, unable to do anything but smile and facilitate the camp, no matter what sort of provocation came their way. Even a mass outing to Canary Wharf on Friday did nothing to dampen their spirit of ‘facilitation’, and they left the ‘robust policing’ to the hoards of private security in grey suits. 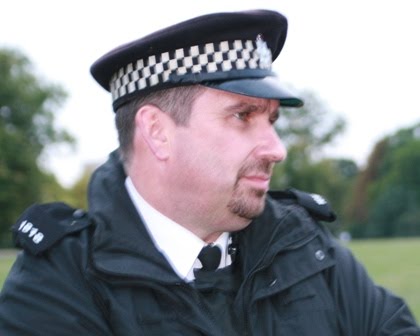 Ian Caswell, one of the few regular FIT cops to make an appearance at camp

To have forced the police to do back down, and to change their policing so completely from previous climate camps, is no small achievement. Climate camp legal team have put a lot of pressure on the police from all sorts of directions, and they should be given the credit for us all being able to come and go from the camp without the sort of shit we’ve had to put up with before. And they have done this without making concessions and without stirring up the good protester / bad protester rift that many liberals try to impose.

Police (and FIT) harassment was gone (for the time being at least), but police surveillance proved a harder nut to crack. Throughout the camp, remote cameras propped up on a cherry picker were able to pick out new and familiar faces for the FIT teams to focus on. FIT cops stationed at a camp set up a couple of miles away were able to get a direct feed from the camera, and from the helicopter that hovered around from time to time, without needing to be on the ground.

From the cherry picker, FIT could get high quality images of activists training on tripods, with lock on devices, and for mass actions. They were able to maintain, in the words of the Silver command Julia Pendry, an ‘information flow’.

FIT officers were also present at the SWOOP meet up points, although without their usual distinctive FIT jackets. Sgt Graham Wettone, a long standing FIT officer, insisted as he hung around watching the crowd at Bank that he was ‘just on normal duties’. In the end he had to be introduced by FITwatchers to the waiting crowd and hoards of press.

By the end of the camp, the veneer had slipped a bit. FIT teams were back, monitoring and photographing actions at Shell and RBS, although happily they met with some determined opposition.

Overall, we still have some work to do in countering police surveillance from CCTV and remote cameras stationed on cherry pickers. But there is no denying that FIT were on the back foot. They weren’t able to get away with the harassment and intimidation they are used to dishing out, and that in itself is one-up to us. Confidence is growing that we can now defeat the FIT, as is determination that we will not be their willing victims. Bring it on.