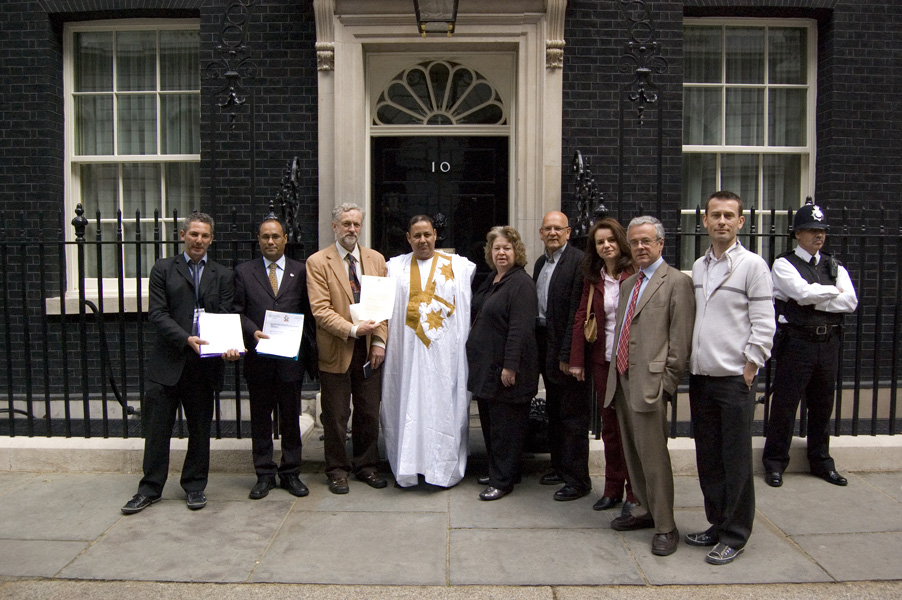 Today, exactly 18 years after the signing of a UN ceasefire agreement, a delegation of campaigners and MP’s will visit Downing Street to call on Britain to use her role within the UN Security Council to help enforce the terms of the ceasefire and resolve the 34 year Western Sahara conflict. They will also demand that Britain takes swift action to ensure the safety of the Oxford Six, a group of students arrested and beaten after protesting at the refusal of Moroccan authorities to allow them to travel to England for a British Council sponsored peace workshop in August.

The UN negotiated ceasefire agreement signed in 1991 brought to an end 16 years of fighting between the Polisario Front (the Western Saharan liberation movement) and Morocco who unlawfully annexed the territory in 1976. Under the terms of the ceasefire a referendum on self-determination was promised but it has been blocked ever since. In a letter handed to the Prime Minister, delegates call on the British government to do more to ensure that the UN Security Council take steps to bring Morocco into line with international law. Versions of the letter have been sent to all representatives of the UN Security Council and their governments.

The delegates, lead by Jeremy Corbyn MP, Chair of the All Party Parliamentary Group on Western Sahara, will also raise the issue of human rights abuses suffered by Saharawi’s in the occupied territories with particular reference to the current situation faced by the Oxford Six. Thanks to swift action by human rights organisations, including Amnesty International, the release of the arrested students was secured. However since their release, two of the students Ms Hassawina Nguyia and Mr. Razouk Choummad were picked up by police and beaten on 27th August and 1st September respectively.

The letter will be delivered by a delegation led by Chair of the All Party Parliamentary Group, Jeremy Corbyn MP and Y.Lamine Baali, UK representative of the Polisario Front. They will be joined by representatives of the Free Western Sahara Network, the Western Sahara Campaign UK, Sandblast as well as leading academics, legal experts and human rights campaigners.

Y.Lamine Baali, chief representative of the Polisario Front in the UK said today:
"This is an important day for the Saharawi people. It is the day that we commemorate the moment we laid down our arms in good faith after 16 years of war and exile. Now 18 years later, little has changed with 165,000 Saharawi’s living in refugee camps in the Algerian desert and the rest of the population living under an unlawful occupation. The experience of the Oxford Six, arrested and beaten for challenging a discriminatory travel ban, demonstrates how serious the current situation remains.”

Jeremy Corbyn MP, said today;
“The plight of Saharawi people is a forgotten struggle. Our collective failure to address Morocco’s ongoing violation of countless UN Resolutions, to stop the illegal plundering of Western Sahara’s natural resources and to allow human rights abuses to be committed with impunity diminishes Britain, it diminishes the United Nations and it is an affront to all those with a belief in justice. On this day, the anniversary of the 1991 ceasefire agreement, we call on Gordon Brown to ensure that the UK takes a lead within the UN Security Council to fulfil its obligation to ensure the agreed referendum on self-determination.”

A separate letter signed by several MP’s, campaigners and the Monty Python, Terry Jones was sent to newspaper editors.

The delegation will go to No.10 Downing Street at midday

They will also meet members of the Foreign Commonwealth Office at 1pm and join a vigil for the Oxford Six at 9pm at Camden Lock.