On Wednesday 3rd September, as the Camp for Climate Action finished up clearing the site of this years climate camp, a group of activists pitched a tent within the grounds of E-on owed Ratcliffe-on-Soar coal-fired power station in Nottinghamshire. The tent was emblazoned with the words 'Climate Camp is coming' in reference to their plans to shut down the power station in October.

German energy giant Eon (owner of the Kingsnorth power station in Kent which was the focus of last year's climate camp) was the target of a number of protests during the week. On the Monday, naked protesters occupied the roof and lobby of Edelman Public Relations. The firm have been employed by Eon to ease public concern over controversial plans to build the first coal-fired power station in the UK for 30 years, and you can contact Edelman here

On Tuesday, activists invaded the Dartford offices of construction giant Laing O'Rourke which is one of the companies bidding for contracts with Eon to build a new coal-fired power station at Kingsnorth. A large group of activists entered the offices, handed out leaflets and talked to staff. Meanwhile, another team scaled the building and hung a banner reading 'Don't Build Kingsnorth'.

Laing O'Rourke is among six companies bidding to build the power station which would, if completed, emit more carbon dioxide than the entire country of Ghana. Other firms bidding for the contracts were targeted earlier in the year by protesters keen to ensure the companies are aware of the opposition they'll face should they attempt to build Kingsnorth. 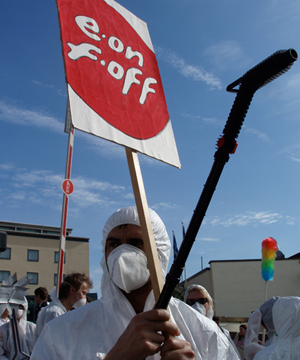 The world coal institute had its door handles chained together and expanding foam piped into its locks, the activists then went on to target E.ON (the company behind climate camp target Kingsnorth power station) with more expanding foam and graffito reading "stop climate change now". Outside London, Christian Aid invited members to trespass at Eon?s Ironbridge power station, where they projected campaign messages onto a cooling tower.

Many other actions took place during the 2009 Camp For Climate Action, which was held at Blackheath in SE London. Most of the people on these actions were first time protesters who took part in 'direct action' training at the camp.

Last year campers pledged to stop the new Kingsnorth, and what was previously an annual event has escalated into an ongoing campaign. One year on, activists inspired by the camp have set up a shop (called Tipping Point) in Gillingham to bolster the local campaign, provide direct action training and invite members of the public to pledge to stand in the way of construction if the decision to build a new coal-fired power station is approved.