Win Animal Rights (WAR) released the text of a press release published on September 8, 2009, by watchdog group SAEN. The press release was about USDA inspection reports for the years 2006, 2007 and 2008 for the Huntingdon Life Sciences East Millstone, New Jersey laboratory. The release was entitled: "Pain for Dogs Doubles at Huntingdon Life Sciences; Overall HLS Experimentation Drops". You can read the full text of the press release and access the USDA reports below. 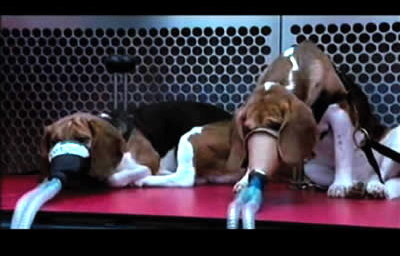 A careful analysis of the documentation reveals good news and bad news. Although the number of animals used has declined 34% in one year, from 2007 to 2008, the number of painful experiments on dogs has increased. The press release states:

"In 2008, 77 dogs were force-fed toxic substances whose side effects caused substantial pain, without receiving anesthesia. At least 5 of these dogs were so injured by the toxic substances that they had to be killed. In 2007, only 30 dogs were used in experiments involving unrelieved pain."

The decrease in the number of animals used is a clear indication that the global campaign to stop the killing at Huntingdon Life Sciences is definitely having an impact. These numbers reflect on business at HLS at a time before the economic downturn and this is coupled with HLS' loss of two key pieces of business announced in 2009. A study of HLS' major competitors reveals that their finances are depressed but recovering. Only HLS sales continue to slide further and further pushing them down into a financial abyss. From the press release:

“Clearly the campaign by animal activists is having a major impact,” said Michael A. Budkie, A.H.T., executive director, SAEN. “Anytime you see a 1/3 drop in business in one year something is very wrong.”

The LSR share price, one year ago, was at an all time high of $39.30. This dropped to a low of $4.12 in March, 2009. It was this that led the Board of Directors to approve Andrew Baker's offer to take LSR (ticker symbol for HLS) off of the New York Stock Exchange and to purchase all outstanding shares, effectively taking the company out of the public domain. Even today with a potential buy out price of $8.50 per share, LSR stock is trading below $8.00 with an extremely low volume of shares traded.

What effect will all of this have? Well, for one thing, HLS will no longer have independent shareholders, who are entitled to access to the company's financial position. Nor will HLS be required to file SEC reports. Financial transparency, which is fairly opaque now, will make it even more difficult to ascertain their financial standing after they go private. This is why government inspection reports, which determine compliance with current (and painfully inadequate) animal welfare laws and regulations, are very important. These may provide us our only glimpse behind the razor wire fences and locked doors of their laboratory.

Huntingdon Life Sciences is at the brink of financial failure. The animals held captive there, continue to suffer and die. Think of the beagles puppies subjected to painful procedures without even the small comfort of pain killers. Many of them are just babies. Think of the 12,800 animals that were killed to test sugar substitute "Splenda". Pregnant rabbits, infant monkeys and beagle puppies were killed for a lousy product like "Splenda".

Now is the time to concentrate and focus our attention and action on finishing what the global SHAC campaign started. WAR will be ramping up activity against Huntingdon Life Sciences, their employees, their customers, their financiers, their suppliers and anyone else who gives them aid or support. We will name them and shame them where they work, where they live, where they worship and where they spend their leisure time. WAR is coming.

WE WILL NEVER BACK DOWN, UNTIL THEY STOP THE KILLING!

Somerset, NJ – Recently obtained federal reports reveal that Huntingdon Life Sciences use of dogs in painful experiments without anesthesia has more than doubled, even though their overall experimental business has dropped.

In 2008, 77 dogs were force-fed toxic substances whose side effects caused substantial pain, without receiving anesthesia. At least 5 of these dogs were so injured by the toxic substances that they had to be killed. In 2007, only 30 dogs were used in experiments involving unrelieved pain.

“The concept that dogs, no different than those who share 43,000,000 American homes, are literally poisoned inside the labs of this facility is totally shocking,” added Budkie. “This is not science; this is nothing short of animal abuse.”

However, these same reports reveal that animal activists’ campaign against the Huntingdon Life Sciences (HLS) Corporation has been effective. Government reports filed by the company disclose a one-year drop of 34% in animal use at the New Jersey laboratory.

“Clearly the campaign by animal activists is having a major impact,” said Michael A. Budkie, A.H.T., executive director, SAEN. “Anytime you see a 1/3 drop in business in one year something is very wrong.”

The USDA reports are available upon request from SAEN.

Note from WAR: Our sincere appreciation to Michael Budkie and SAEN for obtaining and posting this information. For your convenience, we have obtained copies of the USDA reports from SAEN and have posted links to each of the three reports below. Just click on the links.