At a community meeting space in NYC’s Greenwich Village for a Win Animal Rights Open House and film screening last month, an announcement was made that “SHAC IS BACK” with the formation of SHAC-North America. 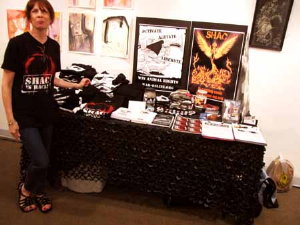 It is not known at this time where SHAC-NA will be headquartered although rumor has it that it might be in Mexico. The SHAC-NA website (

http://shac-na.com) will be up and running soon and publication of a SHAC-NA newsletter is scheduled for either later this year or early next year.

The news comes after the SHAC7 (6 activists and a corporation, Stop Huntingdon Animal Cruelty USA Inc.), were found guilty in 2006 of multiple federal felonies for their alleged role in simply campaigning to close down the notorious animal testing lab, Huntingdon Life Sciences.

They were not accused of actually smashing windows, liberating animals or even attending demonstrations, rather reporting on and encouraging others to engage in legal demonstrations and supporting the ideology of direct action.

In a similar case in January 2009, 7 activists from SHAC UK were then sentenced to a total of fifty years in prison, after they were found guilty in December 2008 of 'conspiracy to blackmail' Huntingdon Life Sciences (HLS). Heather Nicholson was jailed for 11 years, Gregg and Natasha Avery sentenced to nine years each, Gavin Medd-Hall an eight-year prison sentence, Daniel Wadham jailed for five years, Dan Amos and another were both sentenced to four years in prison.

"They conspired to do A B and C ... with Persons or Persons Unknown." - Who were persons unknown? It really didn't matter, as the above conspiracy law linked the individuals even though they had never met them or talked to them.

HLS will test anything for anybody. They carry out experiments which involve poisoning animals with household products, pesticides, drugs, herbicides, food colourings and additives, sweeteners and genetically modified organisms. Every three minutes an animal dies inside Huntingdon totaling 500 innocent lives every single day.