Direct action to shut down Hazelwood coal-fired power station, the largest producer of carbon emissions in Australia, one of the dirtiest industrial plants in the world. 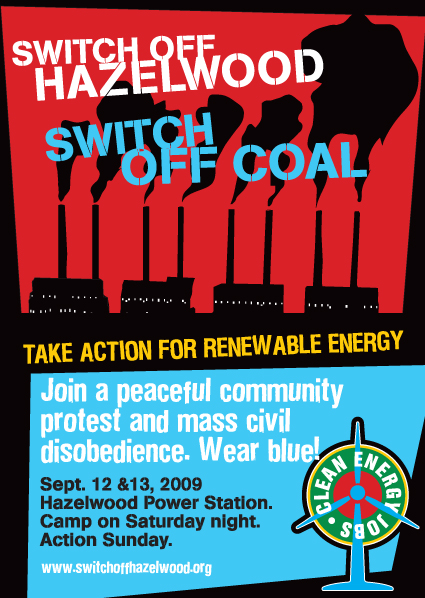 At the weekend, protesters in Australia used non-violent direct action to try to shut down Hazelwood coal-fired power station, the largest producer of carbon emissions in Australia, one of the dirtiest industrial plants in the world.

The 40-year-old Hazelwood plant was due to be shut down this year and replaced with a gas-fired power station, but such is the power of Big Coal in Australia, that it has had its life extended to 2031!

Hazelwood spews out 1.58 million tonnes of CO2 every month! Had the plant been replaced with gas turbines, the CO2 emissions would have been two/thirds lower. The extension will pump a further 340 million tonnes of CO2 into the atmosphere. Equivalent to putting an extra 8 million new cars on the road! By comparison, in 2007, the entire electricity system in Australia was responsible for 200 million tonnes of greenhouse gas emissions. Over the next two decades, Hazelwood will wipe out half the the CO2 emissions that the Australian government proposes to save elsewhere.

According to figures collected by WWF in 2005 Hazelwood tops the list as the industrial world's dirtiest power station. Hazelwood produces more CO2 per kilowatt-hour than any other power station.

Hazelwood is owned by a British company International Power. It was built in 1964 using outdated 1950s technology.

Hazelwood lies in the state of Victoria. Victoria has a 5-star energy efficient home standard, expected to save 200,000 tonnes of greenhouse gases per annum by 2010. Just five days operation of Hazelwood would cancel this out!

The finger is often pointed at China for its carbon emissions, conveniently forgetting that China is producing consumer junk for the rich Capitalist West. The world's No1 in terms of CO2 per capita is Australia at 20.58 tons per year, five times that of China at 4.5 tons per capita, with that other offender India down at 1.16 tons per capita.

The world's top five carbon producers per capita: Australia, US, Canada, The Netherlands and Saudi Arabia. If tar sands production goes ahead in Canada, carbon emissions will dramatically rise in Canada.

Australia has proposed a mere 20% reduction in greenhouse gas emissions by 2020, based on levels in 2000. Australia sees destroying old growth forests as meeting its renewable targets!

After South Africa and Poland, Australia is the most coal-dependent country for its energy needs. Australia lacks diversity of supply, 78% of its electricity generation is from coal-fired power stations.

According to Lord Stern in an address in China last week, the situation is now more dire than the Stern Report indicated in 2006, and the ability of the planet to cope is less than was thought then, the effects of climate change are also more rapid!

Protesters in Australia are drawing their inspiration from Kingsnorth 6 and Drax 29 in the UK.

Contrary to the lies peddled by Dirty Coal, there is no such thing as clean coal, it is the world's dirtiest fuel.

State Law protects 'critical infrastructure' against sabotage with a possible 25 years in prison.

The previous week, direct action had shut down a car rally due to pass through a sensitive wilderness area.

When faced with a corrupt political system in partnership with Big Business, direct action is the only avenue left.

There has been a manifest failure of the corrupt political elite to deal with the biggest threat to people and planet.

The scattering of direct action we have seen to date is a mere taster of things to come if corrupt politicians continue to huff and puff hot air and continue with a policy of business-as-usual.

In the UK, the next big action will be to shut down Ratcliffe-on-Soar coal-fired power station 17-18 October 2009.

Stop Press: Over the weekend there were several arrests at Hazelwood.