Anwar Basim Saleh, the 21-year old Iraqi gay activist from Baghdad, is at present in Holland, where he has applied for asylum. 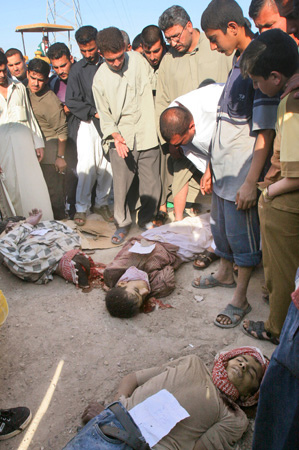 EveryOne Group: we must stop the deportation of Anwar Basim Saleh, the Iraqi gay activist. An appeal to the Dutch authorities to award him immediate refugee status.

Anwar Basim Saleh, the 21-year old Iraqi gay activist from Baghdad, is at present in Holland, where he has applied for asylum.

Anwar, before leaving his country of origin, was the coordinator of a “safe house” for homosexuals working alongside the Iraqi LGBT organization. He was arrested in February 2009 by members of the Iraqi Interior Ministry (Badr Corps) for his role in the association. He was badly beaten up, tortured and he suffered a serious trauma after the long period of detention and the abuse he was subjected to.
He was put under investigation and interrogated over and over again about his role as an LGBT activist and his involvement in the running of a “safe house” in Iraq, where persecuted homosexuals are secretly taken in and offered assistance.

During his detention he met five other members of this organization who have been sentenced to death for the same reason. During a visit to the jail of an Iraqi LGBT volunteer, Anwar handed over a letter with a desperate appeal: “save me from the death penalty.

Iraqi LGBT immediately paid the authorities 5,000 dollars in bail to obtain the young man’s release. As soon as he was released from jail on April 14th, 2009, Anwar immediately got on a plane to Paris, thus fleeing his homeland where he would have undergone an unjust trial, and would most likely have been sentenced to death.

After a few months without any help from the French institutions, associations and authorities (while begging on the streets and living as a tramp), Anwar (who speaks no other languages but his own) left France, and on June 22nd entered Dutch territory. He approached the police authorities in Rotterdam of his own accord, and after telling them his story, they sent him to the local refugee office, which gave him shelter at Terabil asylum centre on June 24th.

On September 2nd, 2009, Anwar was sent for by the Justice Ministry to discuss his asylum application, and was informed that according to the Dublin Regulation, it is up to France to decide whether or not to grant him refugee status.

Anwar, who is still in Holland, begged them to reconsider his application in Holland (where other homosexual originating from Arab countries have taken refuge) to avoid having to make yet another traumatic move and long wait before he learns his fate.

In the Iraqi capital, in an interview given to the newspaper “The National” (

http://www.thenational.ae/article/20090503/FOREIGN/705029847/1002) a militiaman declared: “we see homosexuality as a serious disease that is spreading rapidly among the young men in the community, after it has been brought here by American soldiers. These are not Iraqi habits or habits of our community, and we have to wipe them out”.

Over the last few months it is believed that dozens and dozens of gay homosexuals have been brutally murdered because of their homosexuality in an effort to eliminate those who are considered “morally deviant”. However, this kind of crime has been taking place since 2003. Officially, the Iraqi police state that the number of murders over the last two months is less than ten, though unofficially they acknowledge that the figure is at least double that. Some of the victims were murdered by their own families or tribes, who see homosexuality as a serious stain on their own honour.

The Iraqi militiaman, in the same interview states: “we have the approval of the most important Iraqi tribes to get rid of the men who imitate women”, explaining that he was once in the Mahdi Army, but now acts independently of the militia of the disbanded leader of the Moqtada-al-Sadr movement: “Our aim is to contribute to the stabilization of society”.

Homosexuality is illegal in Iraqi and, after instructions posted in 2005 on the website of the Shiite religious leader Ali al Sistani, it is to be considered a crime punishable with the death sentence - and homosexuals are to be killed in the “worst” way possible. Though this page was later removed, the sentiments it expressed appear to be shared by other Iraqi religious leaders.

“The Islamic punishment for gay people is to be burnt to death or subjected to any other form of capital punishment”, said imam Hussein from the mosque in the Karada district of Baghdad. “Those who break God’s laws must be purified by the Muslim community. There are clear rules for humanity: men must be men and women must be women”. The religious leader states that the Iraqi government should intervene with determination against homosexuals, but if it fails to, it is more than acceptable for families and tribes to kill them. “The truth is that homosexuality is a source of shame for them. By killing homosexuals, they are doing God’s will”.

Taher Mustafa, a member of the medical staff in Baghdad, has recently stated that over the last three months he himself has seen three men he believe were killed because of their homosexuality. He also added: “three men, between the ages of 17 – 25, who were either killed or burnt to death”.

In September 2009, an article in the British Sunday magazine ‘The Observer’, revealed that the Iraqi Islamic extremists who hunt out homosexuals have started monitoring chat rooms and websites, and since the beginning of the year they have murdered more than 130 gay men. The journalist from The Observer met the leader of one of these fundamentalist organizations in Baghdad. A 22-year-old computer expert, he spends at least six hours every day hunting out homosexuals over the Internet: “It is the most simple way to find these people who are destroying Islam and who aim to soil a reputation we have taken years to build”.

After the international alarm sounded months ago by Iraqi LGBT and EveryOne Group (and after an attempt by the EveryOne activists Roberto Malini, Matteo Pegoraro, Dario Picciau and Glenys Robinson to seek a mediation with His Excellency Mazin Abdulwahab Thiab, the Iraqi Ambassador in Italy - as well as the institutions of the Multinational Coalition in Iraq), Human Rights Watch has also recently described the repression of homosexuals in Iraq as “an authentic ethnic cleansing programme, a systematic campaign against the gay community which is being subjected to torture and murder”.

EveryOne Group, which is in direct contact with the president of Iraqi LGBT, Ali Hilli, as well as with the young asylum-seeker, is appealing to the Dutch and French authorities, as well as the members of the European Parliament, Commission and Council (particularly the Committee Against Torture) to grant Anwar Basim Saleh refugee status and suitable protection as soon as possible. We ask that his rights be recognised according to the Geneva Convention, the Charter of Fundamental Rights of the European Union and the international laws that defend a person’s right to life, health and personal freedom. We ask that Anwar be spared further psychological and physical stress, because just the news of a risk of him being deported back to Iraq could kill him.

We are requesting the intervention of the United Nations High Commissioner for Refugees, asking the organization to be the spokesman for this case in order to guarantee the most correct and urgent procedure to ensure the boy is granted international protection and the risk of deportation is eliminated for good.