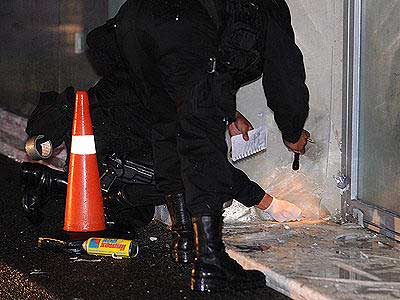 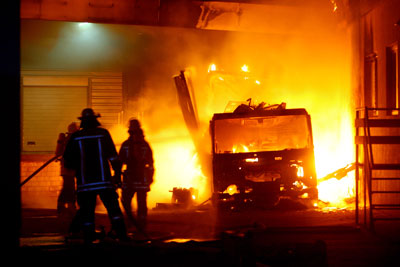 "In the night of 7 on 8 September John Seil and Luc Hansen of BDO Luxembourg/Anchor Sub Funding got a visit by the Animal Rights Militia. At the house of John Seil (10 op der Haangels L-5322 Contern Luxembourg) we left incendiary devices underneath the expensive car outside his house.

At the house of Luc Hansen (1 rue Curie L-3447 Dudelange Luxembourg) we spray painted the big white wall at his house with 'Luc Hansen est un pédophile' (Luc Hansen is a pedophile) so it was visible for the whole street. For the rest we left slogans on his house like 'Stop with HLS or die', 'Drop HLS or ELSE...'. And to finish off the job we set fire to his garden with incendiary devices.

We have sent personal letters to both John and Luc with our demands that they should stop any business with HLS, stop giving loans to HLS/LSR, withdraw any future loans and leave HLS in their current debt.

In the letters we left some special notes for them why it would be wise to stop supporting HLS. For at least 3 years or more they have been able to hide their filthy business. This means they are at least responsible for the death of 210,000 animals, if not more! What they did to the animals will come back at them. We are not going to hold back, we are ready to take on the fight for all the animals that have suffered and will die in the future.

The letters contained some serious threats to some of their close relatives/colleagues, which go much further then just setting fire to a car or spraypaint. Luc Hansen and John Seil know what to do and if they don't we will return very soon.

excerpt from an anonymous communique (translation):

"The Frente de Liberación Animal (FLA) claims the explosive attack against a boutique of the 'MaxMara' clothing/fur chain located in one of the most bourgeois areas of Mexico City. The disruption of the social order, imposed by the state through use of technology and the military, was once again imminent. The explosive rage of the abolitionists filled the street when a bomb was detonated on September 14.

With this action we make it clear that the fight against the anthropocentric system continues, since direct and frontal attacks are necessary against businesses that profit from the exploitation of animals and which destroy the earth and those who live in it.

With this sabotage we join the international week against MaxMara. The explosion that damaged the facade of the store was not a coincidence. It was not a whim or an attempt to get attention, as the sensationalist press will say; instead this is a response to the domination, objectification and commodification of millions of animals (mink, chinchilla, fox, raccoons, etc.) raised in the infernal fur farms, which are nothing more than concentration camps, where non-human animals are subjugated and forced to live a life of torture and imprisonment waiting for their murder, sick and crazed due to the denial of their wild natures.

The multinational company MaxMara believed that attacks on their shops would only happen in Europe, as has been the case, but now we have hit them. We want this store to stop selling fur, to sever completely their links to the fur industry. We want the complete abolition of the system and we will not bargain or settle for reforms, nor negotiate the freedom of animals, because there is no justice today, there is only us."

"A group of caring people trashed pens near coventry tearing down the sides, piercing pipes and snapping supports. we then moved on to a large shooting tower; lets just say when he gets to the top he will be in for a shock, lets hope their gun dosn't discharge when they hit the floor (we would hate for them to get hurt...)"

"Between Friday the 4th and Sunday the 13th of September an exhibition of animals called 'Planeta Animal' was on display at the Palacio Peñarol [Montevideo].

All kinds of spiders, snakes, amphibians and reptiles were locked up inside this place, exhibited in glass cages as if they were mere objects (a python from Indonesia, a snake from the United States, a lizard from Africa, another python from Burma, a coral snake from Honduras, a lizard from Sudan, a tarantula from Brazil, a zebra spider from Costa Rica, an African gray spider, a Chilean spider, among others).

This 'Animal Planet' travels throughout the world, bringing these animals everywhere on the pretext of 'education,' though who knows what can be learned from the lives of animals who are not in their natural habitat. Of course, the entrance fee of 200 pesos says it all. More than an educational tour it is a tour to fill the pockets of the owners of this farce.

We were also there on Friday, during the early morning hours; with spray paint we graffitied the doors and walls of the place with slogans like 'animals are not ours to profit from', 'stop the exploitation' and 'animal liberation,' among others. Before we left we threw red paint on the walls, the floor and the advertising posters. So on Saturday morning all the visitors to the dubious educational tour viewed the new decor.

WE WANT AN END TO MAN'S EXPLOITATION OF MAN, OF OTHER ANIMALS AND OF THE EARTH.
THIS ACTION IS AN INVITATION TO EVERYONE WHO WANTS TO SEE ALL THE CAGES EMPTY TO STOP HOPING FOR LAWS, POLLS AND POLITICIANS AND TO INSTEAD TAKE TO THE STREET TO MAKE IT CLEAR THAT WE WILL NOT WAIT FOR ANYONE, THAT IT TAKES DIRECT ACTION, EVERYDAY, IN EVERY ACTION AND THOUGHT.

UNTIL ALL CAGES ARE EMPTY!
ANIMAL LIBERATION!"

"Whilst out walking we found a live crow held in a trap to be used to bait other birds inside the trap. with the farmer just feet away the best we could do was to release the bird, but rest assured, we will go back and destroy the trap along with any other signs of animal abuse we can find. we wont tell you where this scum bag operates as we would like to keep our visit as a suprise."

On September 11, fires destroyed a truck and damaged a refrigeration unit at a meat company in Hannover. Police estimated damages at 100,000 Euros.

The fires were the latest incident in Hannover that police suspect are linked to protests against construction of an animal testing laboratory by the pharmaceutical company Boehringer Ingelheim.

According to media reports, on August 14 slingshots were used to punch holes in windows at city hall. "Purchased by Boehringer" was painted at the offices of the Social Democratic Party; slogans against the animal lab were also painted at Green Party offices and elsewhere in the city.

On August 12, 500 police officers, supported by helicopters and water cannon trucks, mobilized to remove several dozen protestors from buildings and trees at the site where Boehringer Ingelheim is planning to build its laboratory. The site had been occupied for several weeks by protestors.

In early August, a building at the nearby veterinary university was painted, and Hannover mayor Stefan Weil’s house was attacked with paint on July 28.

"August 23
Tonight we entered the already known pheasant farm 'Galeotta Nuova' in Strada Uguzzolo, near Parma.
With burning hands we worked to end the job started in 2005.
2 incendiary devices with gasoline were ignited under the tractor of the farm.
Now it is up to the farmer, Gino Ceci, to decide what to do, because we will go on setting the flames of animal liberation... and those not so quick to decide may feel some heat...
-ALF-"

"August - Figino Serenza (CO) - Italy
The pheasant farm "Roncorone" has been attacked once again. This time the activists used paintbombs to hit and ruin both the house and the car of the farmer.

July 15th - Italy
One crow liberated from a kind of trap used widely around Italy.

February 2009 - Como - Italy
The houses of directors of 'Bennet' hypermarkets have been damaged with paintbombs as an action against the sale of fur in their 59 stores around Italy.
The company decided to go fur-free shortly after this action."