Last Wednesday afternoon, 9 Sept, the Climate Rush held a Green Fayre in the centre of Aylesbury with guests Caroline Lucas and Hugh Fearnley-Whittingstall and I went to photograph them. Photos Copyright (C) 2009, Peter Marshall, all rights reserved.
The Climate Rush are continuing on their tour and are now at Stroud. 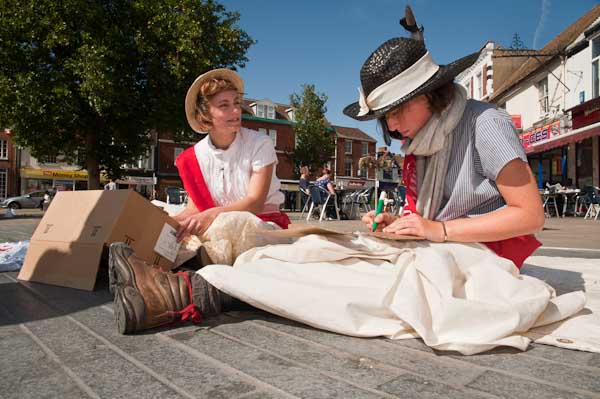 Getting ready in Aylesbury for the Fayre 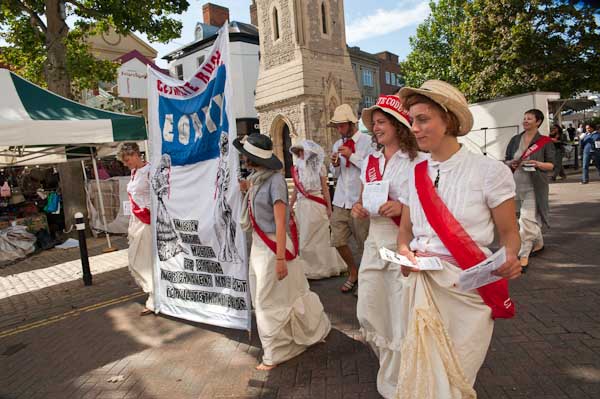 Drumming up business with a procession through the market square 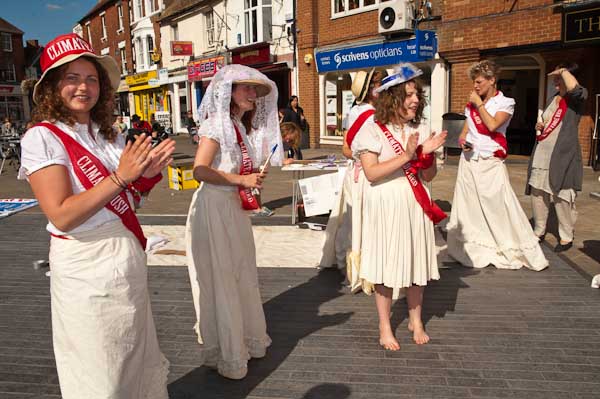 Climate Rushers invite people to write to their MP 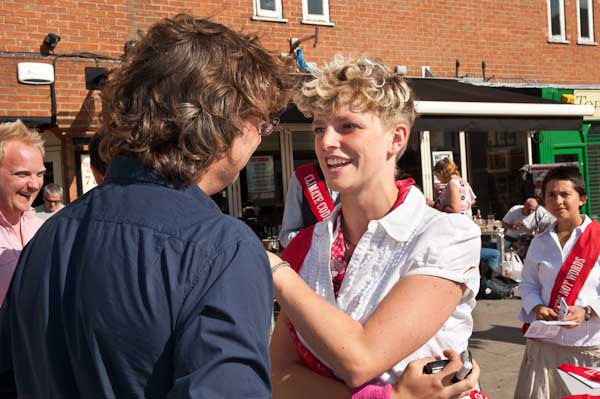 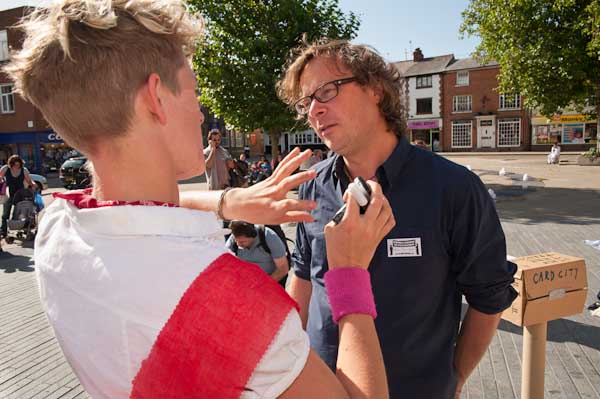 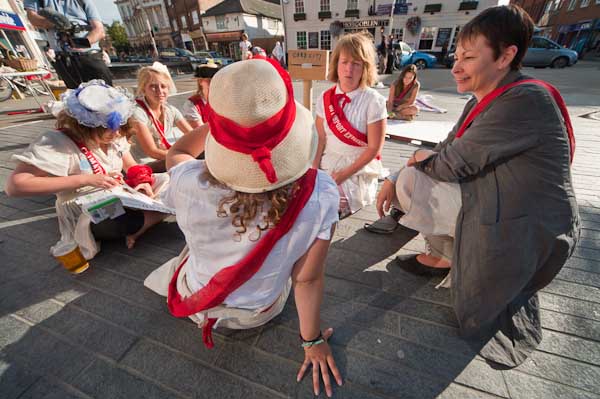 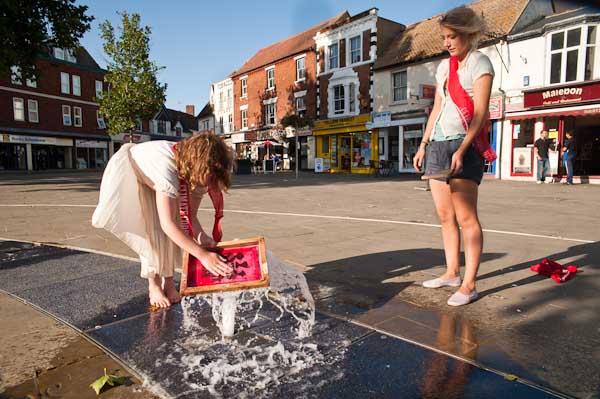 Washing the Climate Rush silk screen in the fountain

Aylesbury was the most northerly point of the Climate Rush tour of South West England, which is continuing until the end of the month. They started their walk at Sipson, the proposed site for a new runway at Heathrow and then made for Aylesbury, Oxford and Stroud, where they should arrive today, to meet with Ecotricity and look at low-carbon technologies, as well as having a stall at the Farmer's Market there on Saturday 19th Sept. From there they walk on, along with their two 'caravans' and three horses, to Bristol, Taunton, Exeter and Totnes.

Last week they held a Green Fayre on Wednesday afternoon in a pedestrian area in the centre of Aylesbury, Kingsbury. It's a pleasant if rather empty area, with a few pubs and cafés as well as shops around its edges, and a water feature with a number of small fountains.

Wednesday was one of the best afternoons of the summer, warm and sunny, and although it wasn't crowded there were enough people around to make the event worthwhile. As well as the Climate Rushers themselves, there were two other attractions, with a chance to meet and listen to both Green Euro-MP Caroline Lucas and celebrity cookery writer and TV performer Hugh Fearnley-Whittingstall.

At the start of the event, Tamsin Omond and some of the other Climate Rushers in the long white suffragette dresses and red sashes carried one of their banners (EQUITY: Emission Quotas Must Be Per Capita; The Rich Have No More Right To Pollute Than The Poor) around the nearby busy market area and nearby streets, Tamsin announcing in a surprisingly loud voice the chance to meet both the TV Cook and a Euro MP.

Whether because of this or not, throughout the afternoon quite a few people stopped to talk to Hugh and tell him how much they enjoyed his programme. Others just edged towards him, stopping a few yards away phone in hand to take a picture.

There were a few short speeches and quite a few people came over to take leaflets and stopped to talk to the Rushers about climate change and what they could do. A few children came to do some drawing, and some people wrote notes about environmental issues to be sent to the local MP.

Aylesbury Museum rose to the occasion, bringing their own stall on which people could make paper bead necklaces, and more to my taste, bringing apples and the rare Aylesbury plums from trees in their gardens to give away. Other gardeners brought produce too, and we enjoyed eating them, including some raw petit pois, with raw Jerusalem artichoke a special treat.

It really was a very pleasant afternoon, and as things began to quieten down and I sat there drinking a pint of beer from the neighbouring pub, enjoying the company and the fine weather, it was easy to begin to think that all was well with the world. But of course it isn't, but this was a reminder that the planet we have really is worth saving. And if we all take action, possibly we can.

You can follow the progress of the Climate Rush on Tour on their blog:
CLIMATE RUSH ON THE RUN

More pictures from the Green Fayre at Aylesbury on Demotix:

and shortly more still on