Photos from Palestine stall in Edinburgh on Saturday 19th September 2009 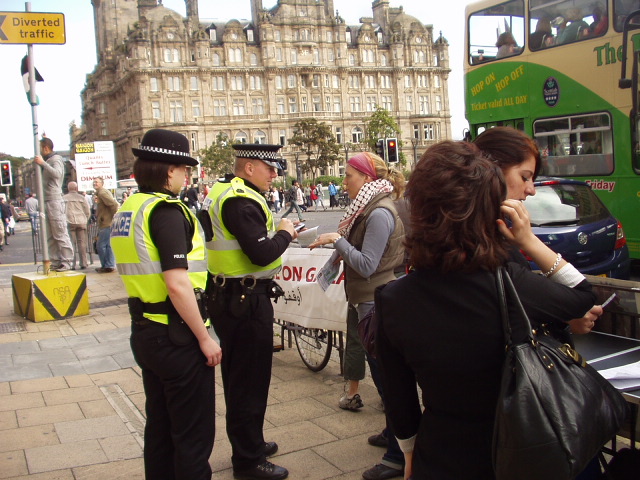 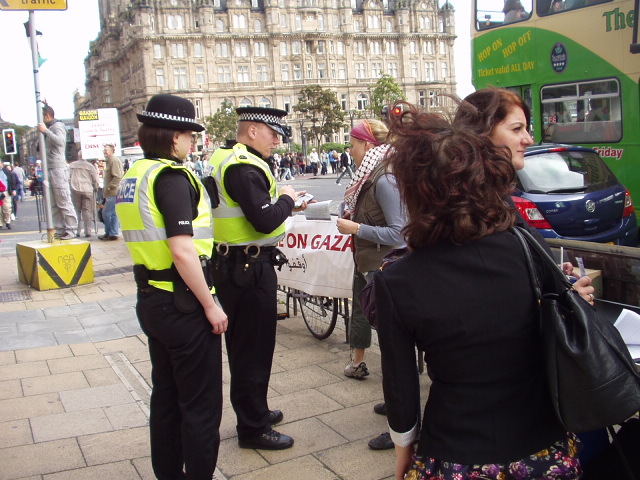 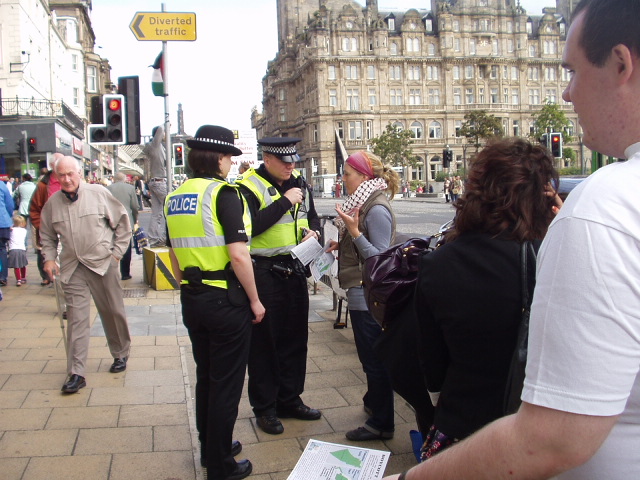 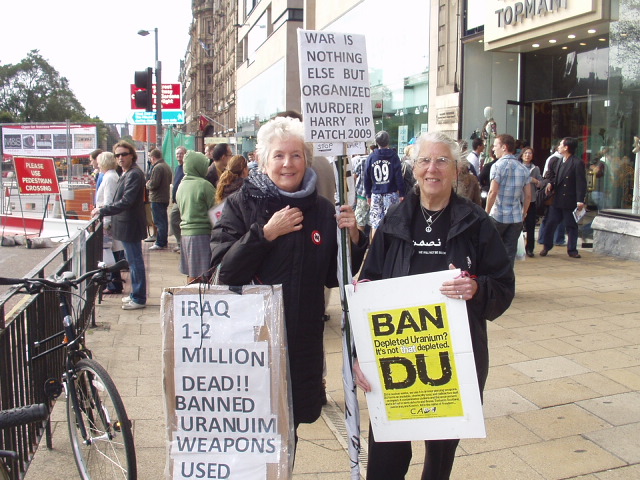 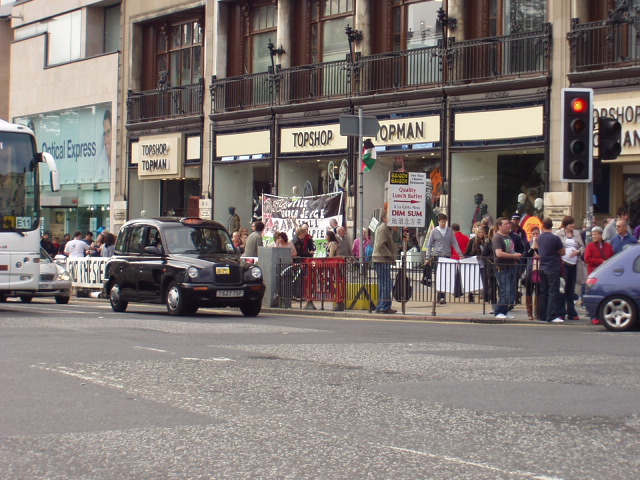 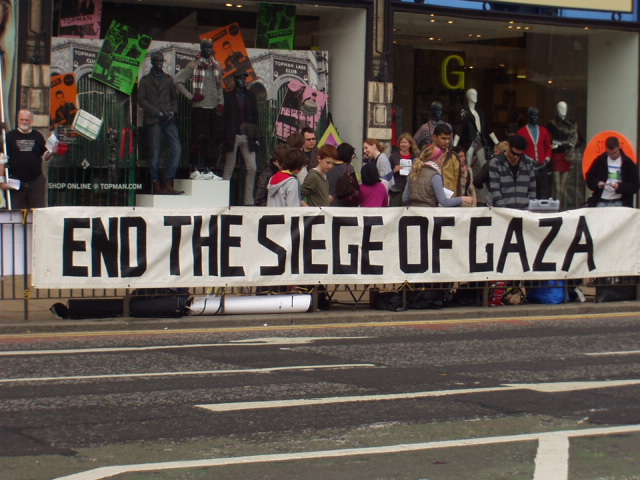 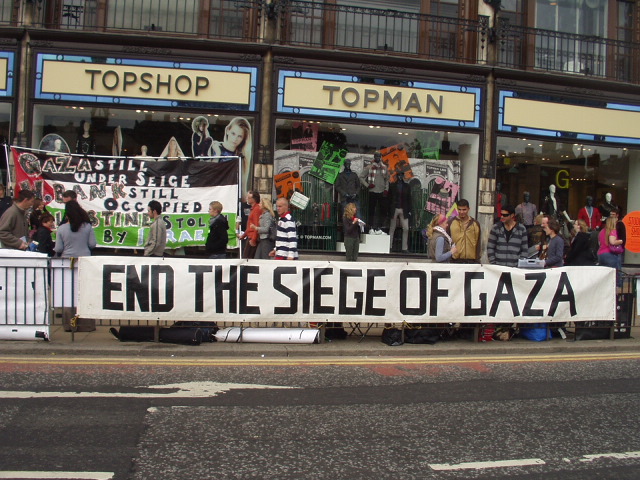 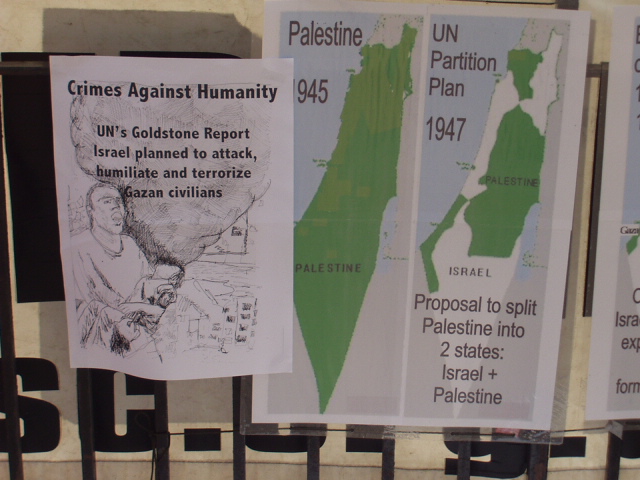 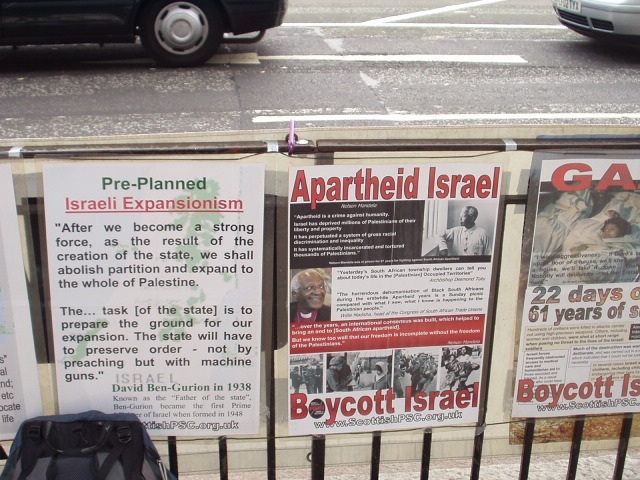 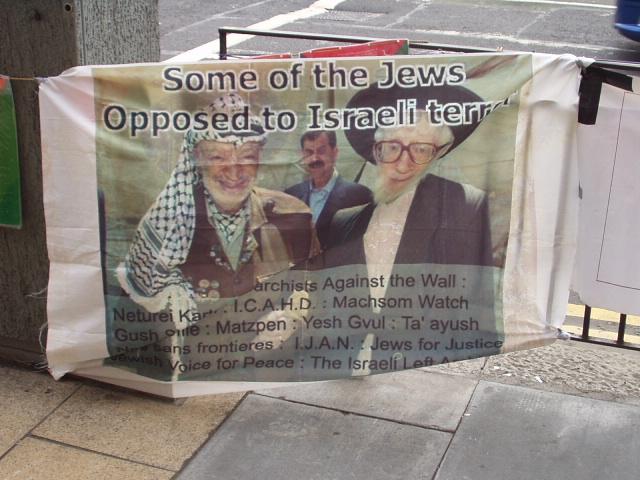 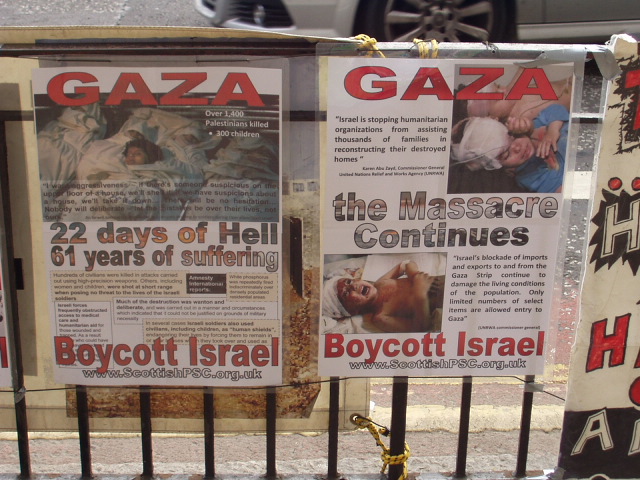 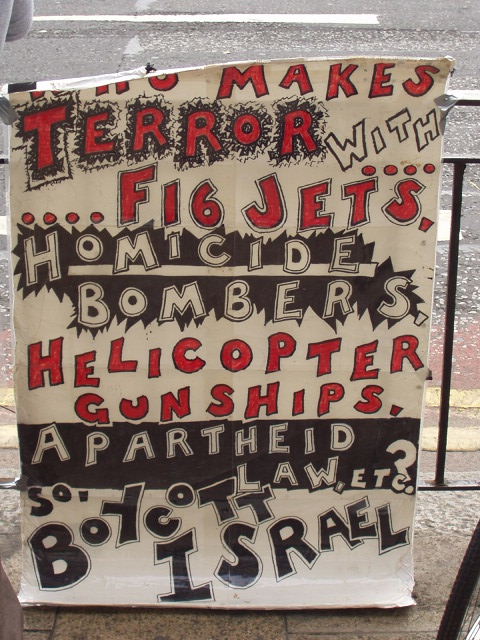 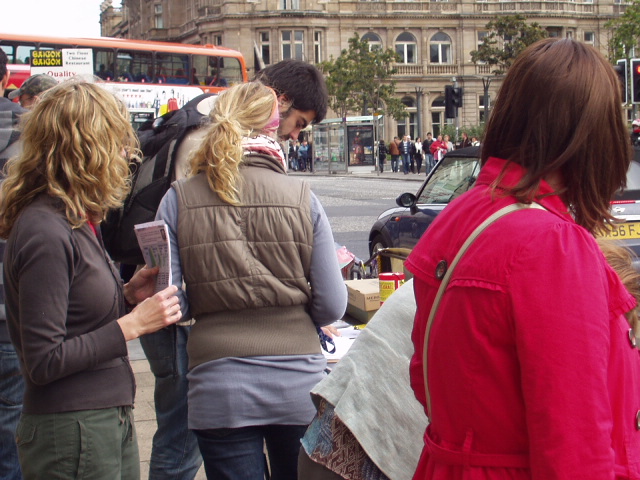 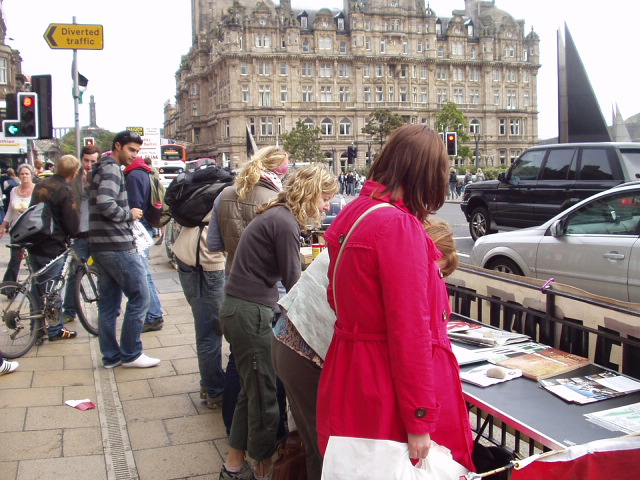 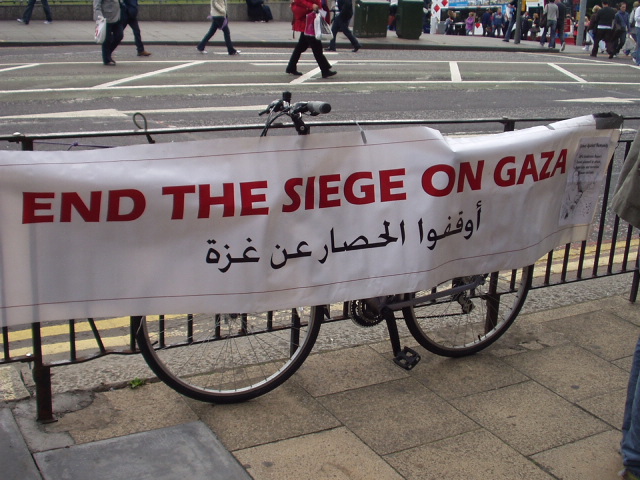 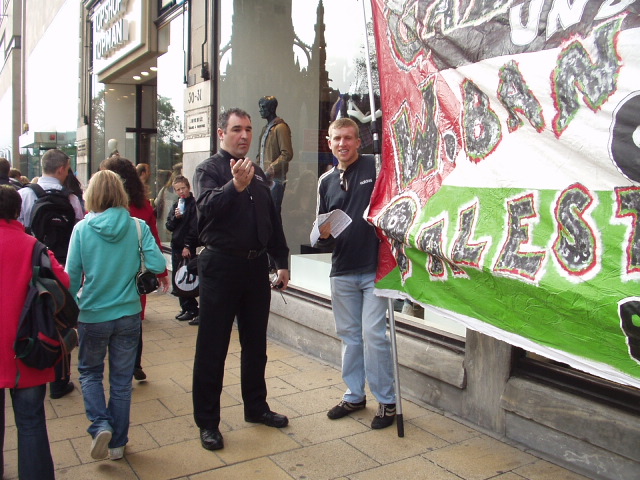 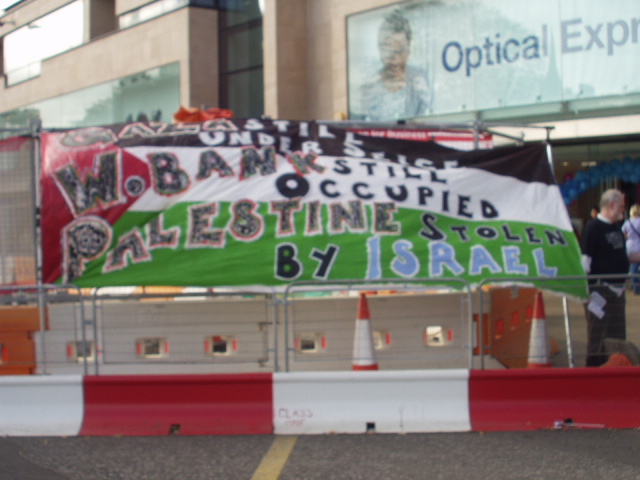 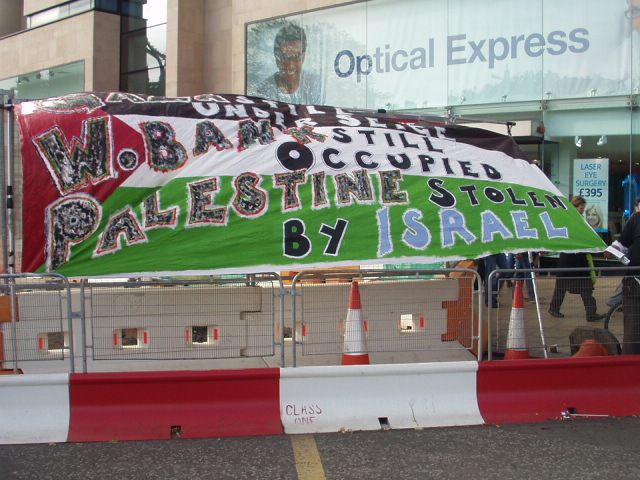 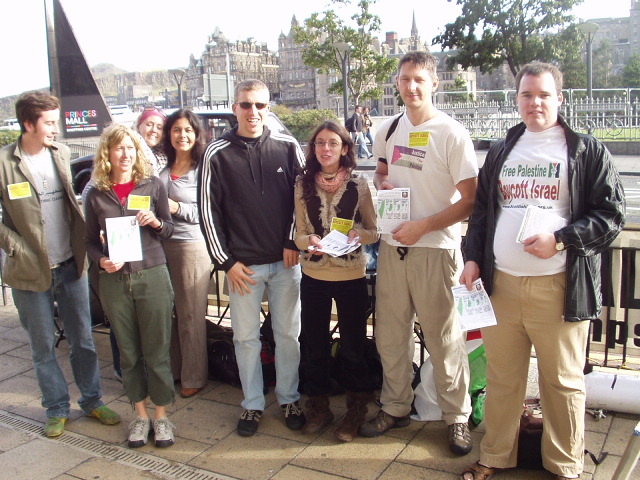 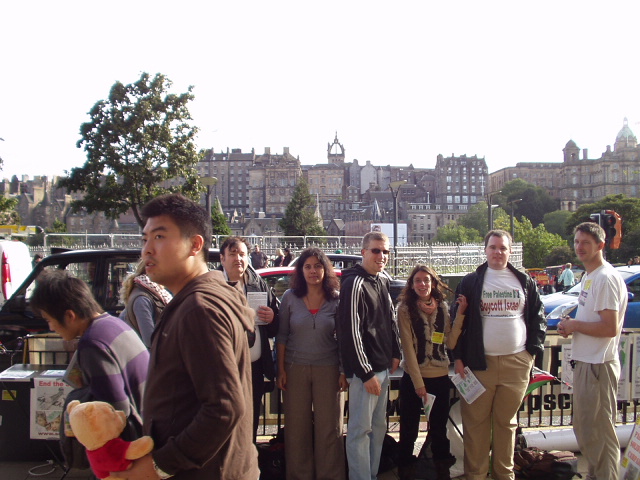 There was a lively and successful stall for Palestine on the afternoon of Saturday 19th September in Edinburgh’s Princes Street from 2.00pm to 4.00pm. While last week there were about half a dozen volunteers manning the stall, this week we got in to double figures – I counted 11. This, I feel, is due to an increasing awareness of the injustice meted out to the people of Palestine by the illegal and brutal Israeli occupation.

The giant Israeli propaganda machine with its `blonde bombshell` military spokespeople apologists is facing a problem. Israel so often portrays itself as the victim – a plucky little nation surrounded by large and hostile Arab powers. The trouble is that the carnage in Gaza earlier this year, which saw the deaths of some 1,400 Gazans, is simply `unspinnable`.

The Goldstone report, a United Nations Fact Finding Mission on the Gaza Conflict by Judge Richard Goldstone of South Africa, released a 575-page report which mainly highlighted evidence of war crimes by the Israeli army during the massive offensive against the Gaza Strip.

Here is the full report:

The Goldstone report drew a volley of furious tirades from officials in Tel Aviv, where Prime Minister Benjamin Netanyahu called it a 'kangaroo court' whose findings were pre-written.

The Israeli army also disparaged the report as 'biased, radical and groundless', while Foreign Minister Avigdor Lieberman described it as an attempt to deface Israel.

"I deny that completely, I was independent, nobody dictated any outcome... the outcome of the report which was the result [of our independent investigation]," Goldstone stressed.

The report, which is due to be presented to the UN Human Rights Council later this month, listed multiple specific instances of alleged war crimes, such as Israel's shelling of a house where soldiers had reportedly forced Palestinian civilians to assemble, targeting fleeing civilians who waived white flags and sometimes even followed Israeli instructions, as well as the alleged targeting of a mosque at prayer time, killing 15 people.


It also documented 'direct and an intentional attack' on al-Qods Hospital, and Palestinians' complaints that they had been used as human shields by the Israeli army.

On the Palestinian side, the report charged armed groups in Gaza with failing to distinguish between military targets and the civilian population in their rocket attacks in southern Israel.

Five members of the Scottish Palestine Solidarity Campaign will attend a hearing in Edinburgh Sheriff Court at 10.00am.


Five members of the Scottish Palestine Solidarity Campaign are charged with ‘racially aggravated conduct’ following a protest against the Israeli siege of Gaza. They interrupted a performance during the 2008 Edinburgh International Festival by an Israeli musical ensemble, the Jerusalem Quartet, whose admirers had written of them that, ‘holding a rifle in one hand and a violin in the other is the ultimate Zionist statement’. The four enjoyed the double official status of ‘Cultural Ambassadors’ of the State of Israel and ‘Distinguished IDF Musicians’


The charges against them are absurd and the action will hopefully fail. Please come along and show some solidarity, even if it is only for a short time.