Hermaphrodites speak out in Solidarity with Caster Semenya

Unfair and harmful treatment of hermaphrodites in sports has a long and painful history, shattering careers and crushing lives. When the global media started hounding Caster Semenya, worldchampion 2009 over 800 m, after she had been subjected to a sex test, and she eventually was exposed to be a "hermaphrodite", this was also noted in the intersex community, and several people spoke out in solidarity. 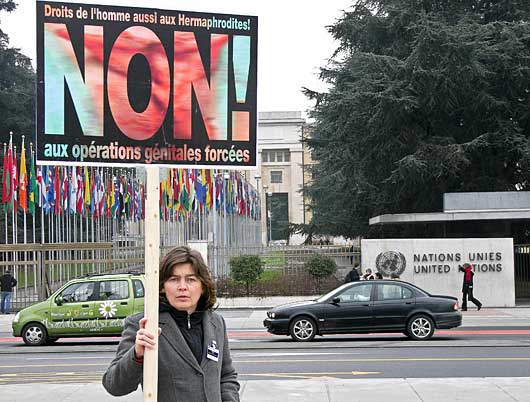 [NOTE: Commonly used as a derogatory and offensive term, "Hermaphrodite" is recently being reclaimed with pride by individuals and advocacy groups. However, not by everybody. Many prefer the terms "intersex" or "intersexed" (to avoid conflation with "heterosexual", "homosexual", "transsexual" etc.). Before referring to individuals or groups as "Hermaphrodites", first please make sure they don't mind.]

"It's A Hermaphrodite", read the headline in the free newspaper. "Manwoman", bold and in capitals, the lead. "Testicles hidden inside the body," stated the caption. The article itself began: "Make-up won't help it." I was appalled by so much malice and ignorance. [...]
[...]
Never was a human being globally exposed and humiliated as a "hermaphrodite" like recently Caster Semenya. For weeks now, she is virtually getting her pants pulled down in public, every day, on every channel, no escape from derogatory speculations about her most intimate bodyparts. A free freakshow, everybody welcome to point and sneer.

Caster Semenya's dignity doesn't account for anything at all. Not only is she threatened to be "stripped" of her medal and excluded from women sports in the future, but already denied of her right to medical privacy, her human and personal rights are continuously violated, all in the name of sports, nation and growth in sales, and up to now without anybody ever being held accountable. That she's black and from South Africa—a scoundrel, who suspects illicit motivation.
[...]
I am, what Caster Semenya is alleged to be: A hermaphrodite with "wrong chromosomes" and "testicles hidden inside the body" (though a bad runner). Like Caster Semenya, I was lied to, betrayed and abused. In my "developed" native country Switzerland, without consent I was castrated and subjected to forced genital surgery to be made a "100% girl". [...]
[...]
From the bottom of my heart, I wish Caster Semenya will be able to overcome this perfidy with as little harm as humanly possible and will resume her successful career. And I hope, journalists, sports officials and politicians will finally do their homework, to be able to better cope with their responsabilities in the future.