Camp Ashraf Protest at US Embassy

The hunger strike by 12 Iranians for 'Camp Ashraf' in front of the US Embassy in London reached 60 days. A demonstration to support the protesters will take place today, 26 September from 18.00-20.00. Photographs from 25 Sept. 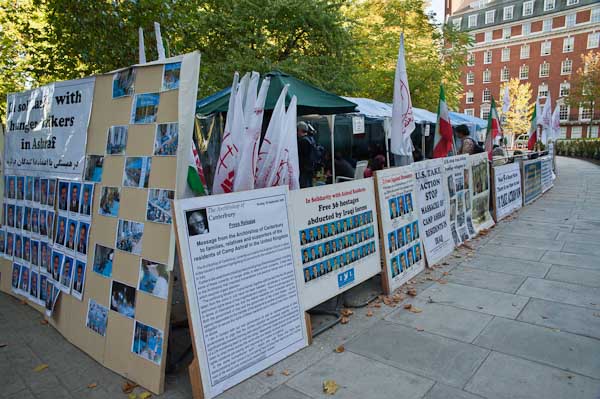 Camp outside the US Embassy 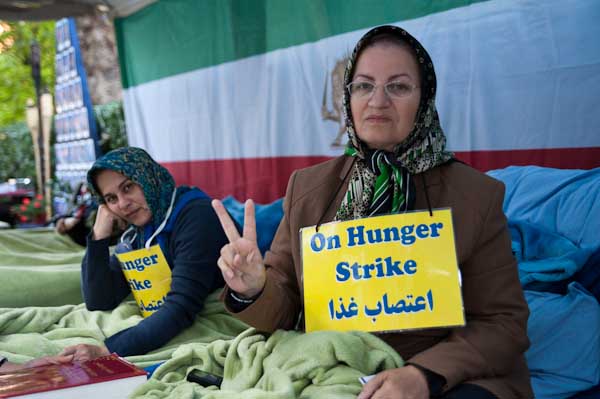 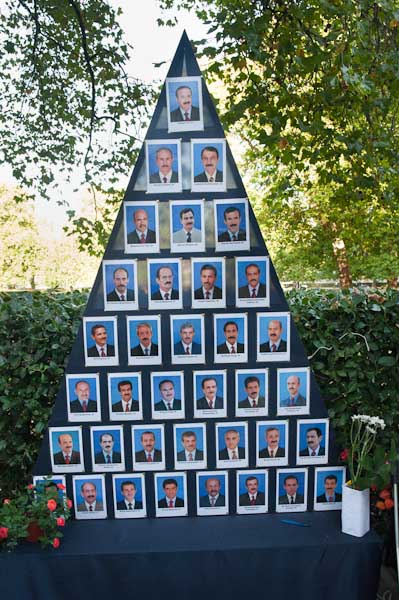 36 men detained without trial and tortured 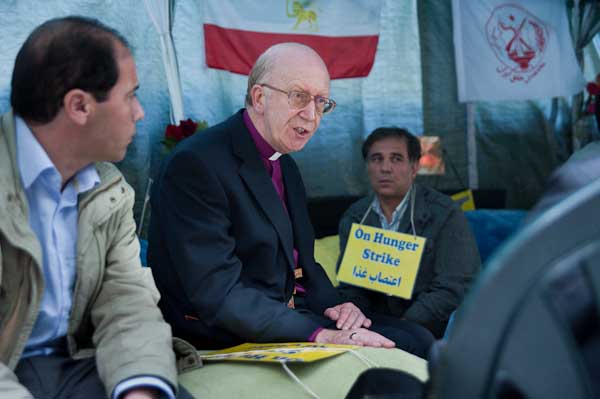 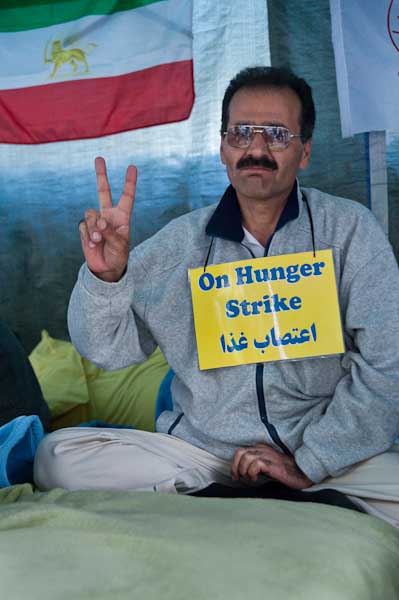 Camp Ashraf or Ashraf City is an Iranian refugee camp in Iraq established in 1986 as a home for members of the People's Mujahedin of Iran (PMOI), one of several sites given to this major Iranian opposition group by Saddam Hussein.

After the US invasion, US forces took control of the site and a few months later they seized all the weapons held by the PMOI. Those living in the camp were designated as protected people under the Geneva Conventions, protecting them against being deported, expelled or repatriated.

On 1 Jan 2009, the US handed control of the camp to the Iraqi government. The US retained a military presence there and gave promises to the camp residents that they would be treated humanely according to Iraqi law and that none would be deported to any country were they had a "well-founded fear of persecution."

Following demands from the Iranian regime that the Ashraf residents be extradited to Iran, Iraqi forces entered the camp on July 28-30 this year. According to reports the US forces at the camp simply stood and watched as a variety of weapons - including batons, axes, water cannona and live ammunition - were used to attack the 3500 unarmed Iranian refugees, who include a thousand women. Journalists were kept out of the camp, but according to Amnesty, film footage shows Iraqi military 'Humvees' being used repeatedly to run down residents.

A camp was set up outside the US Embassy in Grosvenor Square London by families of the victims of Camp Ashraf. Twelve Iranians are on hunger strike there in sympathy with those detained in Iraq, and today they were on the 60th day of this protest. Several have already been taken to hospital because of critical organ failures, but are continuing their protest.

Daily, hunger strikers from the camp at the US Embassy go to 10 Downing Street to urge our government to take action, but so far there has been no response from the British or US governments to their demands. The hunger strikers ask for the release of the 36 detainees and a withdrawal of Iraqi police from Camp Ashraf and for access to the camp for lawyers, journalists, doctors and relatives. They want temporary protection by US forces until an international force can take over, and the immediate stationing of an international monitoring team at the camp by the United Nations Assistance Mission for Iraq.

The atrocities during the attack on Camp Ashraf and the continuing detention of the 36 (despite two legal decisions in Iraqi courts that they be released) have received little attention in the international press, while in the UK news media have chosen to ignore the protest outside the US embassy.

Organisations including the Law Society, Amnesty International and the Church of England have lent their support to the campaign. While I was visiting today, the Bishop of Oxford was visiting the camp in Grosvenor Square and he will report to the Archbishop of Canterbury, who earlier on 20 September issued a strong statement: "The continuing situation in Camp Ashraf together with the fact that 36 people taken from the camp in July have not been released, constitutes a humanitarian and human rights issue of real magnitude and urgency." He also supported the demands for UN monitoring, calling for a response as a matter of urgency.