Honduran President Zelaya: Israeli mercenaries are planning to assassinate me

Three months since the US-instigated coup in Honduras, ousted president Manuel Zelaya claims being subjected to mind-altering gas and radiation. Furthermore, he fears being assassinated by Israeli mercenaries. 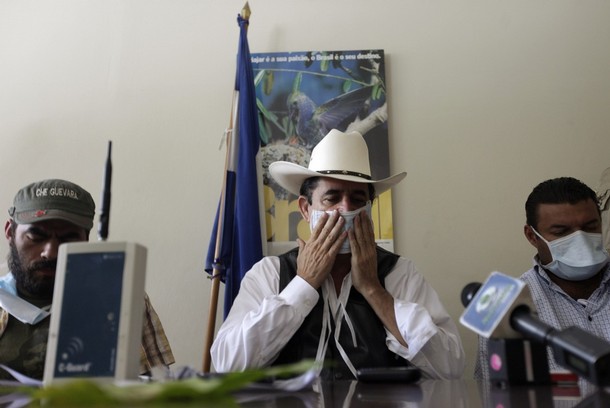 
excerpts from: They're torturing me, Honduras' Manuel Zelaya claims


[President of Honduras Manuel] Zelaya was deposed at gunpoint on June 28 and slipped back into his country on Monday [21 September], just two days before he was scheduled to speak before the United Nations.

He sought refuge at the Brazilian Embassy [in Honduras], where Zelaya said he is being subjected to toxic gases and radiation that alter his physical and mental state. […]

He's sleeping on chairs, and he claims his throat is sore from toxic gases and "Israeli mercenaries'' are torturing him with high-frequency radiation.

"We are being threatened with death,'' he said in an interview with The Miami Herald, adding that mercenaries were likely to storm the embassy where he has been holed up since Monday and assassinate him.

"I prefer to march on my feet than to live on my knees before a military dictatorship,'' Zelaya said in a series of back-to-back interviews. […]

Witnesses said that for a short time Tuesday morning, soldiers used a device that looked like a large satellite dish to emit a loud shrill noise.


Brazil’s Foreign Minister today called on the Security Council to ensure the security of his country’s embassy in Honduras, where deposed Honduran President Jose Manuel Zelaya has taken shelter since 21 September.

“It is imperative to ensure that the regime in Honduras fully respect and comply with the Vienna Convention regarding the Brazilian Embassy, in particular its inviolability and the security of its personnel and the people inside its premises,” Minister for External Relations Celso Amorim told the 15-member body in a briefing before it adjourned for consultations on the matter. […]

The Minister said he was gravely concerned that the same people who had perpetrated the coup d’état in Honduras might threaten the Embassy’s inviolability in order forcefully to arrest President Zelaya. Their actions and statements implied that the Embassy had ceased to enjoy diplomatic status. “Besides public statements to the same effect, the de facto Government sent a communication directly to the Ministry of External Relations, in which it refers to the Embassy as ‘one of the facilities that the Brazilian Government still maintains in Tegucigalpa’,” he added.

Emphasizing that President Zelaya had been received at the Embassy in his legitimate capacity as the constitutional President of Honduras, Mr. Amorim said that, in a public communiqué, the de facto authorities had tried to deny responsibility for his safety and for damage caused to properties in the vicinity of the Embassy.

He said the facility had been virtually under siege since President Zelaya’s arrival, with electricity, water supply and phone connections cut off, cell phone communications hampered, and disruptive sound equipment installed in the front of the building. Access to food had been restricted and the movement of official Embassy vehicles curtailed. In addition, a bailiff had been sent with a warrant to search the premises.