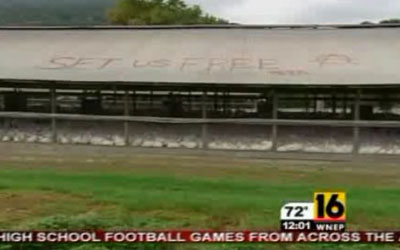 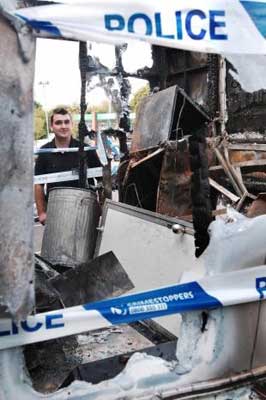 According to local media, late on September 23, "Set us Free" was spray-painted on the roof of the Pallman Farms turkey farm (1511 Summit Lake Road) in Clarks Summit, Pennsylvania. The barn houses approx. 2,500 turkeys. (Photo from WNEP Ch. 16 news report:

"A stark warning has been sent by post to the pervert that owns highgate rabbit farm. It is a clear message of what is to come. WE WILL CLOSE YOU DOWN!

*Geoff Douglas is the owner of Highgate Farm, in Lincolnshire, which breeds rabbits and ferrets for Huntingdon Life Sciences.

"Avoiding police patrols two leather shops had locks glued, one of which had windows cracked.
If you oppress and exploit animals expect a visit.
Somerset ALF"

Local media has reported that the Classix Catering burger van was destroyed in a suspected arson attack around 1:00am on September 20 in Taunton (Somerset). The owners did not have insurance.

"On Wednesday Max Mara Madrid received an anonymous call that claimed that an explosive device had been placed in the shop.

The warning was false, but an action as simple and with so few risks can disrupt the normal operation of a business, causing them to lose money and creating a climate of suspicion.

We explore and experiment with techniques for fighting using what is within our reach.
For the animals."

PHONE CALLS AT ALL HOURS FOR PERVERTS (UK)

"Workers of HLS customers have been experiencing some strange phone calls at all hours. This will continue until all your companies ties to HLS are severed. NOVARTIS WE WILL NOT LET UP UNTIL YOU ISSUE A STATEMENT STATING YOU'RE NOT, AND WILL NEVER AGAIN, USE HLS.
OH AND G. DOUGLAS YOUR WIFE SOUNDS LIKE A DOG, BUT THAT MIGHT BE DOWN TO THE TIME OF THE NIGHT."