Cops from the Operation Liberation demo and an open letter! 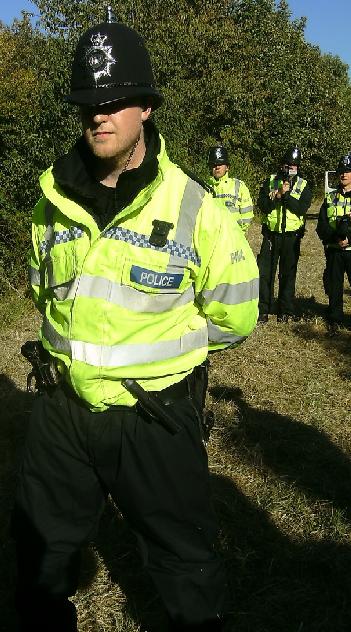 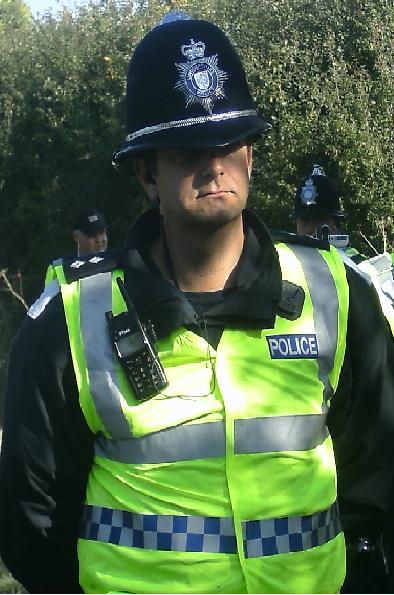 “No feet over the line!”

An open letter to all police officers involved in the policing of SHAC's Operation Liberation protest on 26th September 2009.

Yesterday protesters from around the country came together to take part in Operation Liberation, a protest organized by SHAC as part of a campaign to close down Highgate Farm who breed rabbits and ferrets for animal testing.

The police on the day did not let the protesters go down to the farm and the protest was a static demo away from both the farm and the village. You used an unmanned drone to observe the demo as well as lines of cops and police vans all around us. While it has been argued in the past that drones would be used to limit police numbers the number of police was huge. You drew a line on the path and wouldn't let anyone past it. One officer even moved people back whose shoes were slightly over the line another pushed someone back without even asking the protester to move!

The police seem intent on provoking another Newchurch by preventing effective peaceful protest and building up anger by antagonising the national animal rights movement. If you want to show people that keeping to cooperative protest is a good idea, putting them at the end of a lane away from their target and being totally inflexible isn't a great way of going about it!

I know there are some police trying to avoid another Newchurch. However it seems you have been manipulated by a particularly extreme element in your ranks that needs to provoke the movement to keep its funding. NETCU and similar units seem to be in a very bad way in terms of resources and in this recession they need to manipulate you to keep the funds flowing away from your local policing priorities and to line the pockets of there cosy little number. They don't want to see the movement cooperating with you because that will make them unnecessary.

Many of you may already be angry that money has in the past been wasted on such units. Do you really want funds to be taken from you and used to sent a car of two or more specialist officers from faraway to a small peaceful protest that could easily be dealt with by your beat bobby (or PCSO) in two minutes flat?

You have probably been told that the animal rights movement has been frozen by the SHAC trials, this is not the case. The movement is getting up, shaking itself down and deciding it's direction. Where are you going to push it towards?

See you on the streets,

27.09.2009 08:47
I do agree that a demo which turns into something more lively is better than a demo which doesn't depending on what happens. One hundred people rushing the police lines all getting arrested,then bailed away or remanded for assault when they are clearly outnumbered=bad. One hundred people making an intelligent tactical assessment and charging past ill thought out police lines, getting out lots of ferrets and rabbits...etc....etc=marvellous. My point was that quite a few people are not able to or do not wish to break the law, e.g those on licence, those caring or relatives etc. Individuals and groups need to make a judgement call on what they are able to do and what they are not. But really I agree that we are in a bit of a rut when it comes to using civil disobedience, blockades, liberations and other methods of routing the enemy.

Sort of exposes the lie

What exactly does that prove? That some activists support direct action, of course they do! That some people would get animals out of animal abuse hell holes if they are given the chance, of course they will. But if you don't allow people to express themselves in a reasonable way where do you think they will move towards?

Post G20 style policing has not been extended to animal rights activists. That's a tactical mistake from a local police point of view. Tactical brilliance if your an underfunded NETCU public order response unit.

"A stark warning has been sent by post to the pervert that owns highgate rabbit farm. It is a clear message of what is to come. WE WILL CLOSE YOU DOWN!

*Geoff Douglas is the owner of Highgate Farm, in Lincolnshire, which breeds rabbits and ferrets for Huntingdon Life Sciences.

Now - with messages like these do you continue to wonder why AR protests are still very aggressively policed?

What has an anonymous message got to do with a peaceful protest? Is there some unlawful direct action in the animal rights movement, yes. Does the direct action tend to happen on protests, no.

You also seem to misunderstand me, I'm not saying in this post that the police 'ought' to allow peaceful protest for some moral reason. All I'm saying is it's a tactical error not to, unless your aim is to provoke a reaction. At a time when people are considering our movements direction your action will help shape the choices of many.

It would also be sensible to have a 'hands off' approach to civil disobedience action, in the same way you did with DESi protesters.

Of course, if your from a 'Extremism' Response Unit these tactics are a great way to line your own pockets. You will be ALF recruiting Sargents because you like your cosy little number.

An activist has written a good comment to the police response. I would just like to clarify that my personal view on unlawful actions which defend, liberate and stop abuse of animals (including humans) and the earth are that I will applaud them in the vast majority of cases.
The Highgate demo was a legal demo. FIT were there filming everyone, or trying to, "in case" something happened. The worst that would have happened (from Douglas's point of view) is that some people, not all, would have liberated animals and some damage to property. So what? Just before I got to them farm I had read a headline in which a senior police oicer was reported to have said that the police no longer deal with anti-social behaviour, not when a young mother and her daughter with learning difficulties were hounded, spat on, kicked punched and terrorised to the extent the mother killed her daughter and her self whilst the police sat back and did sweet fanny adams. Apparently the council now deal with "anti social" (including this lady's son being beating unconcious) behaviour whilst the police protect the corporations from criticism and dissent with a bottomless pit of money to fund them.
To all police officers, you may not have any say in where you are sent to police, how you police or why you are sat twiddling your thumbs in a field "just in case" when you know your time is better spent elsewhere but doe this not make you question ACPO and the idiots in charge? I do read police blogs and know what a mess the police are in my advice......rebel, prioritise, use common sense, even if THEY tell you otherwise.

Was going to say something along the same lines.

never fear their silly tactics, we are many, they are few...

a message to the animal liberation groups and activists...

If the tactics of revolutionaries in pittsburgh during the G20 summit, london during the G20 summit, the seattle WTO closure and many hundreds more, are not working, then why would the capitalist system and all its tentacles around the globe take our cameras and smash them, our clothes and rip them and our freedoms and shatter them?

If the tactics of anarchists and socialists are not hounding the worlds elite at every turn, then why would they surveil us? Why would they put us on files with photos and numbers and take continuous footage of us that they show other forces so that they can target us and intimidate us? Why would they terrorise us and imprison us?

If we are not on the right track with the array of tactics that we incorporate - from climate camp, through reclaim the streets, critical mass, die-ins, sit-ins, lock ons, protest camps, property damage, arson, fire bombing, incendiary devices, protests and protecting people from the police on the front line, guerrilla gardening and much much more - then why would they come after us with all their military might and draconian laws or build fortresses around themselves when we go after them?

If ours are not the winning tactics of the true revolutionaries, then why would the state and all of its tentacles wish us so much harm and attempt, using hundreds of millions of dollars and pounds every year, to suppress us and put down our efforts using the media and counter-revolutionary propaganda, such as targeting the blac bloc constantly to try and weaken its appeal or attacking non-violent protesters at climate camp in london to scare people into not turing up to future protests. Not to mention the constant arrests and imprisonment of various "types" of activists around the world, whether its syndicalists in belgrade, revolutionary thinkers in greece, or climate protesters BEFORE they even go on an action.

We, the revolutionaries, should never lose heart...We are on their case 24/7. It can be lonely, frustrating and very hard work....But the importance of what we do can never be underestimated or ignored or, relatively speaking, be allowed to be dismissed as mere "moaning" or "trouble causing" or, which I have heard and it makes me laugh, "anti-democratic"!

The system and all its tentacles, will use every low hitting strategy it can to disrupt our revolutionary course. They will blame the Blac Bloc for shadowing the eco-protesters "peaceful" endeavors, and like wise they will slate the eco-protesters by saying their actions are unlawful.

Whichever group of our comrades they are targeting, they will attempt to spin one off against the other. The simple reason being that they want to divide us once and for all.

But we unite, all the time, we build affinities or loose associations or hard links and contacts and we meet and we plan and we get out there, not just to confront the system and its tentacles, also to show the world that alternatives do exist and we live them as best we can. We expand our reach, we print our ideas, we spread our messages and we continue or actions.

DONT GIVE UP, MY REVOLUTIONARY BROTHERS AND SISTERS OF THE EARTH, THE STRUGGLE GOES ON AND WE ARE MILLIONS! They are few...