Shortly after 10 p.m., a Bash Back!-themed black bloc a hundred or more strong appeared on Forbes Street between Atwood Street and Oakland Avenue. The march was pushing half a dozen or more dumpsters, which were upended in the intersections while seemingly all the corporate businesses on the block lost their windows. Another dumpster was rolled further down the street and set alight before being upended as the bloc fled north. 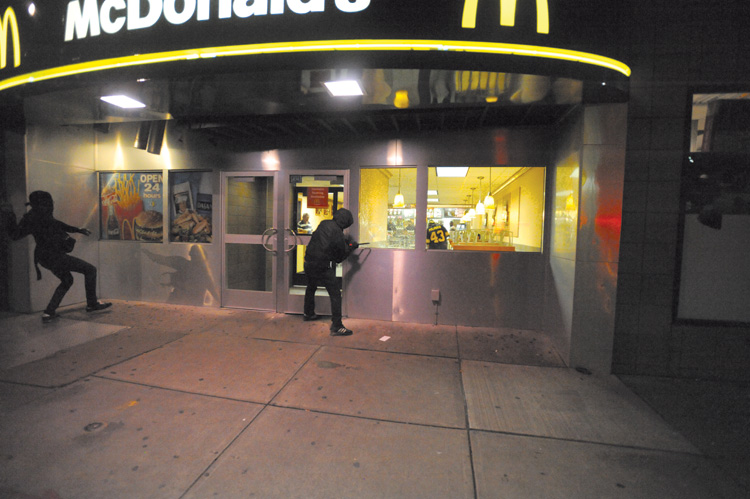 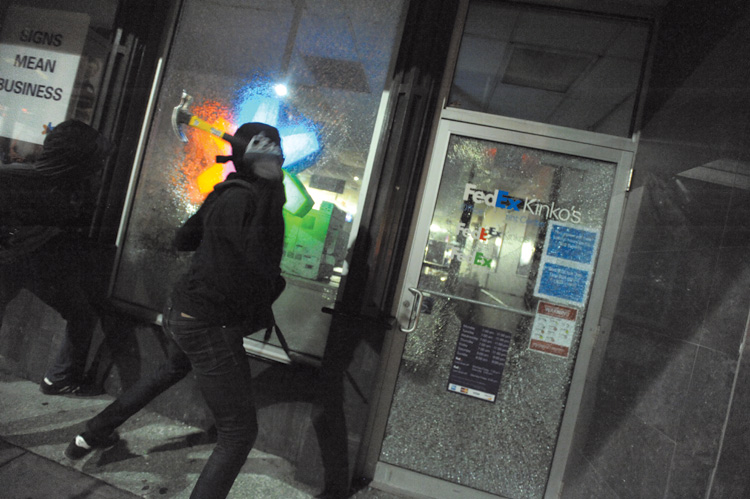 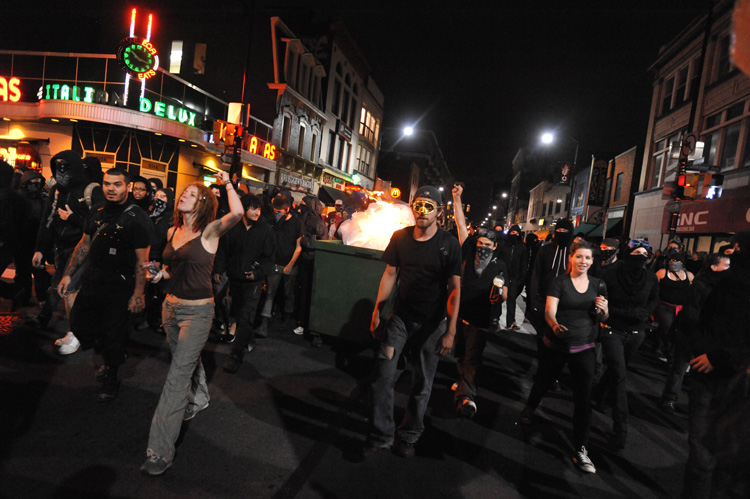 We can imagine the atmosphere of the street at that instant: the running figures, the explosions of breaking glass reverberating off the buildings, the dim streetlights on masked faces, the sound of nearby sirens reminding everyone that militarized riot police in full force were on the way from only a couple blocks’ distance.

Pamela’s Diner, Panera Bread, McDonald’s, Bruegger’s Bagels, Subway, Rite Aid, FedEx Kinko’s, American Apparel, the Pitt Shop, and other businesses suffered damage. An H&R Block nearby on Atwood also reported vandalism. The bloc moved north, encountering a police substation on which a particularly bitter revenge was exacted. Police vehicles were already in pursuit and presumably speeding ahead to surround the march; however, the terrain of the college district was too open, and too populated by civilians, for the police to easily entrap their prey. Some participants broke off from the march at this point; others continued together as far as Craig Street, where Quizno’s Subs, PNC Bank, Irish Design Center, BNY Mellon, and Citizens Bank were damaged before the bloc finally dispersed.

Immediately thereafter, the police issued another prerecorded dispersal order to the students gathered in Schenley Plaza and around the so-called “Cathedral of Learning,” then fired several dozen tear gas canisters at the crowd. The following hours saw massive police occupation of the university area and ongoing clashes with students extending into their dormitories. As in St. Paul after the first day of the 2008 RNC, comparatively modest anarchist direct action provoked such a powerful police overreaction that the police ended up precipitating conflict with the public at large.