Today opposition and labor protesters descended from the main boulevards of the city to the national stadium ("Stade du 28 Septembre"), but were met with a ban order, lines of troops, live fire, and rumors that the military is disappearing captives and bodies of the dead. As many as 80 bodies have been rumored to have been laid out in the stadium itself. If anything like the events of 2007 reoccur, the military would be willing to continue this crackdown for weeks or even months. 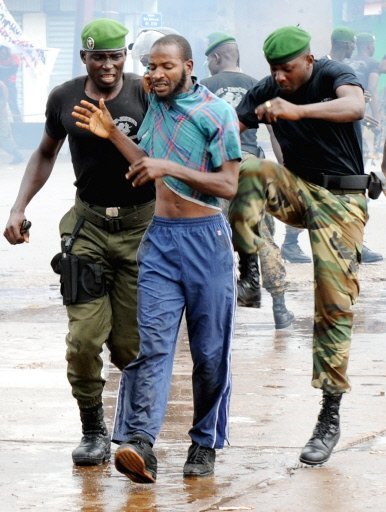 Reports have been coming in all day of a mounting death toll among anti-Junta protesters in Conakry, Guinea.

The cadre of young officers around Moussa Dadis Camara, whose December 2008 coup raised expectations of the first real change in Guinea’s authoritarian kleptocracy since 1984, instead quickly reverted to type. The oppression of opponents and journalists, groups initially invited to consult with the CNDD coup government on a return to democracy and pluralism, are now victims of brutal and continual repression by the military and their civilian allies. Dadis Camara, reversing his original pledges, seems certain to run in the January 2010 Presidential elections, while mining interests and corrupt officials, at first purged from the military/technocrat government, are again in the drivers seat.

The bloody events of this September 28th — the 51st anniversary of Guinea’s rejection of union with France and its demand for independence — seem a continuation, even an escalation, of the force used to crush the January-February 2007 general strike. Today opposition and labor protesters descended from the main boulevards of the city to the national stadium (”Stade du 28 Septembre”), but were met with a ban order, lines of troops, live fire, and rumors that the military is disappearing captives and bodies of the dead. As many as 80 bodies have been rumored to have been laid out in the stadium itself. If anything like the events of 2007 reoccur, the military would be willing to continue this crackdown for weeks or even months.

There are also reports that opposition organizers Cellou Dalein Diallo, Jean-Marie Doré Sidya Touré, and leaders of the RPG party and the UFDG trade union were arrested and/or injured.

This follows the general strike in Labé on the weekend, when Dadis Camara’s new party the Rally for Defence of the Republic (RDR) chose the opposition stronghold and capital of the ethnically Peul/Fulani dominated Fouta Djallon highlands to unofficially launch his presidential campaign. A 20,000 strong protest march and general strike by the citizens of the area followed. In the midst of the violence in Conakry, there were reports that other regional centers saw protests brutally repressed.

Who can say what will happen: Conakry has seem abandoned by the world for more than a decade, since drought ground the massive hydroelectric plant in the north to a halt, throwing the city into darkness. Funds were never forthcoming to fix this Western backed white elephant, and so the infrastructure built around it decayed in place, with street lamps, homes, road, sanitation, and security collapsing on top. The increasingly brutal government of 1984 coup leader Lansana Conte tore through A Second Republic, and then a Third, with no real democracy on offer. The influx of refugees in the 1990s from Liberia, Sierra Leone, and later Cote d’Ivoire has pushed Guineans to the limit.

Now sanctions have followed the Coup, and Guinean’s suffering mounts. A Burkinabe columnist for L’Observateur Paalga wrote a week ago that “For a country that is among the poorest in the world and lives through grants from funding partners, are these the people who will pay the cost of the vile ambition of one man?”

A wild card here is the seemingly unwavering support Senegalese octogenarian President Abdoulaye Wade has had for the Junta, even in the face of AU sanctions, Dadis Camara’s reversal on his pledges to see a democratic transition, show trials of (still likely corrupt) former officials, and random violence by military of all ranks. Expat Guinean opposition activists in Paris and New York have targeted Wade’s involvement in protests over the last month, and the Senegalese opposition have been quick to tie Wade’s support for dictatorship abroad with his continual promotion of his inexperienced son Karim into higher power and his announcement that after more than a decade in power and nearing 90, he will stand again in the next Senegalese presidential elections.

From such dirty dealing comes all sorts of unintended horrors. Also last week, there were reports of xenophobic attacks on Senegalese living in Conakry in retribution for Wade’s role in supporting the Junta. And Guineans in Senegal are beginning to fear they too might be targeted.

From a wider view, Dadis Camara’s behavior is one more in a tide of rising semi-dictatorships happening across West Africa. Two decades ago, the wave of democratization across the region set a thousand polisci students scribbling about a dawning of democratic institutions in West Africa. 2009-2010 may be the final collapse of that bubble. Nigerian academic and columnist Jibrin Ibrahim’s September 27th piece titled “Dramatic reversals” is a sad accounting of this process, from Niamey to Abidjan, to Bissau, Banjul, even Dakar and Conakry. He writes:
--
Presidents Jammeh of the Gambia and Wade of Senegal have arrogated to themselves the right to rule for ever. Presidents Tandja of Niger and Wade of Senegal are grooming their sons to take over from them. Blaise Compaore of Burkina has no son so he is grooming his brother to take over. To achieve their objectives, these presidents are dismantling the constitutional order of their countries.

In Niger, President Mamadou Tandja organised a constitutional ‘coup d’état‘ violating the Nigerien Constitution and the fundamental instruments of ECOWAS and the African Union (AU). He dissolved Parliament and the Constitutional Court for daring to challenge his reckless ambition.

In Guinea, Captain Moussa Dadis Camara is poised to fail to honour commitments he freely made not to be a candidate in the elections to be held in January 2010. He has been paying rented crowds to call on him to contest for the presidency. While we were in Accra, two of his colleagues, Sirleaf Johnson of Liberia and Abdoulaye Wade of Senegal visited Conakry and joined the rented crowd in supporting the ambition of the putschist to remain in power.

Meanwhile, numerous human rights violations are occurring in Niger and in Guinea as the two leaders are arresting leading opposition elements and human rights activists. The International community under the leadership of ECOWAS has been putting pressure on President Mamadou Tandja of Niger and Captain Moussa Dadis Camara in Guinea to refrain from their political adventurism and the reversal of democratic gains in their countries so that West Africa does not return to the era of violent political conflict.

Paradoxically, Nigeria’s role in contesting the erosion of democracy in the region has been very positive.
--

http://234next.com/csp/cms/sites/Next/Opinion/Columns/5463116-148/DEPEENING_DEMOCRACY:_Dramatic_reversals.csp
---
Well, you can read the rest, but let us add the recent elections in Gabon, Congo-Brazzaville and Mauritania to the list. There is no secret here. There’s money to made; western and Chinese gold, uranium, oil, and gas firms are in the midst of a scramble for contracts across the region. Mali announced last week the first oil prospecting parcels covering the desert northeast Kidal Region were being auctioned off, in a place until recently in the midst of rebellion. The rumor in Niamey clearly holds for across the region: why leave just as we’re starting to cash in?

That Nigeria and Ghana are seeming exceptions may be explained in part through events like Obama’s endorsement of Accra’s business climate and the surprising crack down on millionaire Nigerian bank borrowers in arrears to failing banks. Resource extraction and rentier states are the longstanding way in which West Africa has fit into global capitalism. Lagos and Accra, though, are at the center of other changes, of deepening capitalist transformation. In Nigeria in particular there is enough of a business class, bolsters by kleptocracy over the last thirty years, that real live domestic capital accumulation is happening. There and in Ghana — not accidentally both anglophone — are becoming the jumping off points for foreign penetration of Africa. From here foreign firms are tumbling over one another to secure African states farther afield as sources of raw materials. But in the process, these forces, especially those from Asia, also are beginning the capturing of African markets themselves. The explosion of cheap Chinese motorbikes across Bamako or Western, Arab, and Asian telecom setting up shop in Accra; these are signs of a extension of world markets into West Africa as never before.

What’s happening in Conakry, as in many African capitals, is a battle for who will sign these contracts on the African side, and get very rich in the process. In Guinea, as recently in Niger and Gabon, some Africans are fighting this process. But they appear to be losing.

Some useful sources for keeping up with events in Conakry. Note that on the 28th, both Guinean news sites were getting periodic errors as their servers were overloading. Please hold off on hitting them too hard if you can: