One New York demo, one London demo and Fortress make a statement. 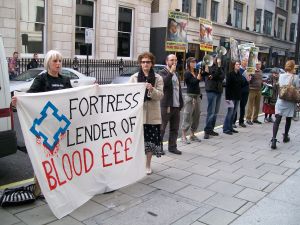 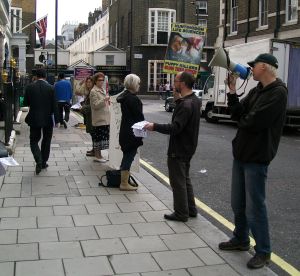 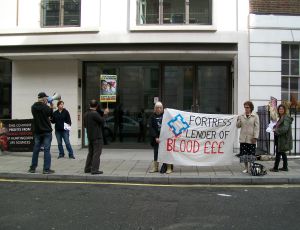 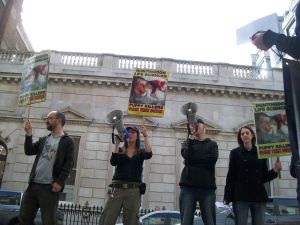 WAR and New York activists recently announced their Fortress Investment Group protest schedule which included home demos at the residential addresses all of their key executives living in the greater New York area. The demo scheduled began Thursday evening of October 1, 2009 and included daily protests throughout the long weekend.

At 6:00 pm a dozen activists gathered at the home of Peter Briger, Jr. Co-Chairman and Principal of Fortress. No sooner had they unfurled the banner and started the chanting, they were interupted by a group of three business men, who asked to speak to the spokesperson of Win Animal Rights. They handed over a letter on what appeared to be Fortress stationary. The unsigned letter, indicated that as of October 1, 2009, Fortress' affiliate had agreed to divest of their interest in Huntingdon Life Sciences/LSR and that Fortress would not be executing a future financial commitment.

WAR accepted the note and suspended the campaign temporarily, until the authenticity and authority of the document could be verified. If we are unable to authenticate by Monday, October 5, 2009, the campaign against Fortress will be reinstated with a new and higher level of intensity.

At lunchtime, a dozen London activists went to 5 Savile Row, the office address of Fortress Investment (FCF Ltd), where we had a loud and focused demo naming and shaming Fortress for their sneaky, under-hand dealings with HLS/LSR, for trying to hide their involvement with HLS in 'mafia style' financial dealings by getting other companies to start shell companies to front their loan to HLS. Fortress don't sound to proud to be helping HLS out do they?

Let's not forget that their loan helped HLS out when Stephens Inc stopped their loan agreement with HLS in 2006. Fortress have effectively being keeping HLS afloat and helping to keep HLS torturing and killing animals. This despite HLS's track record of animal cruelty, sloppy practices and faslyfing test data.

This had nothing to do with certain management of Fortress being a neighbour of Andrew Baker, the CEO of LSR/HLS?

We had a great deal of interest from passers-by about the demo, Fortress and their loan to HLS. People in the building couldn't quite make their made mind up about whether Fortress were at their company address in Savile Row, as activists had differing opinions from occupants who stated that "they are in the building"; to "they have left 18 months ago, a month ago or 2 weeks ago"...

But after the demo was finished and activists were preparing to move on, the building security handed a letter to the police, who gave it to us, it is an unsigned letter on Fortress HQ headed paper and reads:

We are calling on Fortress to clarify their dealings with HLS and Sub Anchor, handing a copied bit of paper with an unsigned letter on it will not do. Surely a company the size of Fortress can be a bit more professional? Along with WAR, SHAC will be asking for more verification from Fortress as to whether this letter did come from them. We will keep you posted.