30 people picketed the entrance to Manchester Town Hall and leafletted top cops from around the country as ACPO members and senior Tories met to discuss policing strategies.

With banners, placards and speech bubbles, the group from Manchester No Borders said: Still Not Loving Police, Still Not Loving Tories - as they returned to the place where they had previously embarrassed council leader Richard Leese with a mountain of jumpers: see

A large police presence wa nearby with some ten vans and 8 horses in Albert Square. Evidence gatherers also showed up for a while. 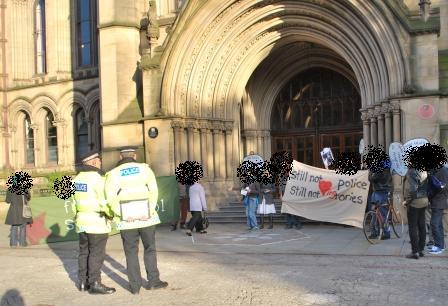 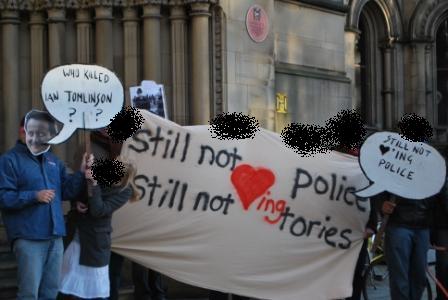 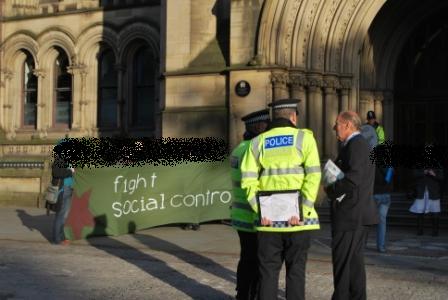 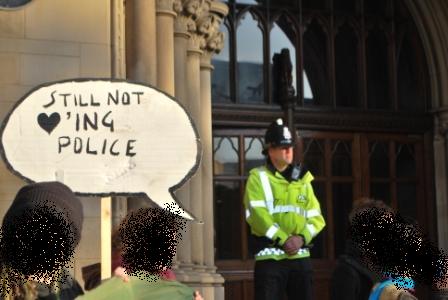 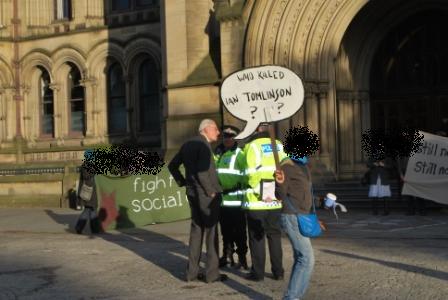 On Sunday evening, the Association of Chief Police Officers (ACPO) held a conference fringe meeting with shadow home secretary Chris Grayling MP in Manchester Town Hall. (Grayling was also the guy who compared Moss Side to The Wire, see

Outside, anti-authoritarian protesters held their own rally, and warned that a Conservative government could bring clashes with police not seen since the miner’s strike and the poll tax riots.

Fittingly, the country’s senior police officers were discussing strategies on “how to build public confidence in policing” after the criticisms they received over their use of stop and search powers, their handling of football matches and environmental protests, and the killings of Jean Charles de Menezes and Ian Tomlinson.

We maintain that this will be an impossible task to achieve under a new Conservative government. Have we really forgotten the policing of the miner’s strike and the poll tax riots?

As we see it, the police does not serve to protect communitites. It serves to protect the government of the time and to squash dissent against unpopular policies. And under the Tories there will be a lot more of these.

We are specifically thinking of home evictions, lay-offs and welfare cuts. All these will bring more protest, and if the police step in, resistance.