Honduras: Cracks in the ranks of the coup-makers 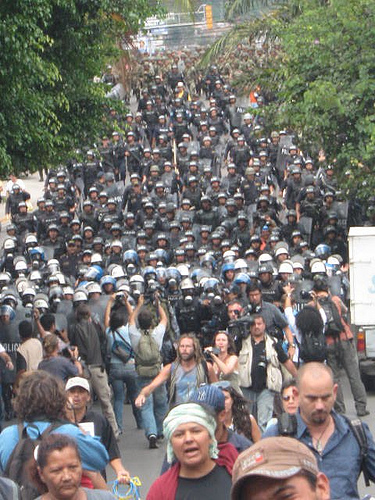 On Wednesday, September 30, more than 1,000 people demonstrated in Tegucigalpa for the right to free speech. They were protesting against the closure of the radio station Radio Globo and the television station Canal 36 by the military two days earlier. "With the censorship against opposition media and the growing number of murdered activists, this regime reminds one more and more of the dictatorships of Mussolini and Hitler," said Roberto, who declined to give his full name, during the demonstration. The protesters demanded the lifting of the state of emergency, which the regime declared the previous Saturday to remove basic constitutional rights of the population of Honduras. Anti-riot police and soldiers broke up the peaceful protest with tear gas and batons and arrested several people. One Spanish journalist was injured and arrested.

In the early morning hours, the police cleared peasants and workers out of a 94 day occupation of the National Agrarian Institute. ongoing since the coup on June 28. The occupiers were protesting against the appointment of a "golpista" (i.e. coup supporter) as the new director of the Institute; they wanted to prevent the manipulation or destruction of property titles archived in the institute, which would enable the expropriation of the lands of poor farmers. 57 people were arrested during the eviction.

The state of emergency, curfews and bans on demonstrations have prevented large demonstrations of the resistance movement in the last few days. Nevertheless, the protests will continue. For example, students of the Autonomous University of Tegucigalpa plan to strike in the coming week against a proposed increase in tuition fees.

Among the supporters of the coup, more cracks are becoming visible. The military leader of the golpistas, chief of staff Romeo Vásquez Velásquez, announced to Honduran newspapers that there would be a "speedy" solution to the crisis. Without giving more detailed information, he said that "some would win and some would lose." On the other hand, the proposal presented by the Industrialists' Association ANDI – a "compromise proposal" whereby President Manuel Zelaya would symbolically re-assume power for a few hours and then hand it over to the military – has been rejected by different sectors of the golpistas, as well as by the resistance of course.

Juan Barahona, one of the main leaders of the resistance movement, reiterated that a negotiated solution must include the return of Zelaya to the office of the president and the convening of a Constituent Assembly. He said the resistance would continue its actions on the streets in any event, regardless of negotiations between the legitimate government and the golpistas. "If they want to start a dialogue, the repression must be stopped. There can be no dialogue if the members of the resistance are simultaneously being repressed and persecuted by the police," said Barahona.

this article was published in German in the newspaper "junge Welt":