Murad Akincilar is a Turkish revolutionary intellectual and trade unionist, who is currently in prison awaiting trial on unspecified charges. Fight Racism! Fight Imperialism! has known Murad for 18 years, since he was a Masters student at the London School of Economics, and is supporting the campaign for his freedom being organised by Swiss trade union UNIA. 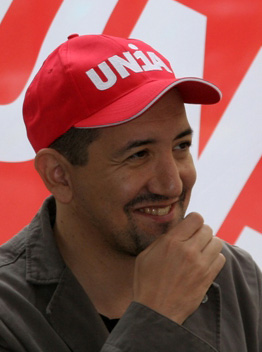 Murad had been living in Switzerland since 2001, having fled political persecution in Turkey, where he had been a trade union organiser and academic. After seven years in exile, during which time he worked for UNIA, campaigned for rights for migrant workers and organised political education for the Kurdish and Turkish community, he was reassured that it would be safe to return to Turkey. He therefore returned to Istanbul this summer. On 30 September 2009 he was arrested. Four days later he was taken to court and remanded in custody.

Tayfun Isci, who writes for the publication Demokratik Donusum Derigisi (Democratic Change), of which Murad was the editor, said ‘The Turkish state’s attitude is that anyone is not on our side is a terrorist. This attitude means that the Turkish state criminalises and punishes people who are engaged in trade union activity.’

The Turkish state is well known for repressing its political opponents and for imprisoning and murdering socialists, communists, trade unionists and supporters of the Kurdish liberation struggle.

Sign the on-line petition, demanding that Murad is released immediately:

Friends and supporters of Murad’s in Britain will be organising a demonstration outside the Turkish embassy in London. Details to follow.