activists met at newcastle civic center for 12 pm and then set off for 12.45pm
With banners and placards, megaphones and loud voices we made a visual and noisy march on northumberland street

walking slowly, activits gained a lot of public support and cheers
the imgege was clear the messege was clear

NO TO ANIMAL CRUELTY, NO TO HLS!

as the rally marched on we then arrived at grays monument and the march seemed gained even more momentum with the clear message of NO TO VIVISECTION and chants of hls - CLOSE THEM DOWN!

the protesters continued to rally at the monument, and in a highly public place hundreds of members of the public gathered close-by to form a large crowd to listen to why we were here and hear about what goes on inside huntingdon life sciences
the police then charged into the rally and without warning violently arrested one protester for section 5 of the public order act, physacally smalming him before carrying him by every scruff.

the police arrest was not taken kindly and they were followed by the protesters while members of the public also angry at what had just happened also followed.

the police responded by pushing away those trying to see what they were doing to the arrested man
as the activist was put in the van the mood became even more angry and more determined, protesters were being physically moved away from the van and then went back to the monument and held the rally there for around an hour longer

the rally was greatly supported, protesters were pleased with the good public response
NEXT TO SANOFI-AVENTIS
the protesters travelled to the site and those who went by train were followed by members of the british transport police
who left their company after they left the train

the protesters gathered at the court order desegnated area only to be told that they'd moved it back
this was challenged activists decided they would challenge it legally and begin the demonstration.

a few protesters managed to slip passed the officers with the court orders without being searved so were not applicalble to the order headed further towards the factory, a few were escorted back to the desegnated protest zone but two of them were arrested, angering us further.

the protesters, with banners, visual placards, shouted and used the megaphones to alert people to what the company was guilty of - supporting vivisection

the police continued to enforce the injunction, and 1 second over the hour the police said to us to stop using the megaphones.

the protesters rallied outside sanofi-aveits gates for a further 3 hours and during which loud naming and shaming of sanofi and chanting against the company ensued.


newcastle animal rights would like to thank those who came to the march and protest.

the protesters have since been released apart from one who has been remanded and is currently still detained, he has been held in custody for over 24 hours.

more info will follow when we receive it
Newcastle Animal Rights 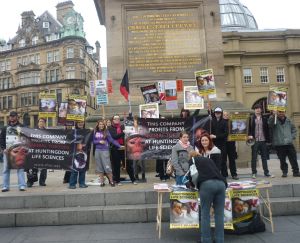 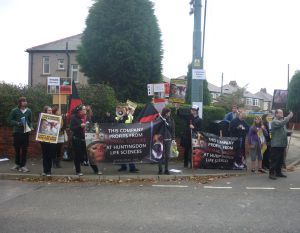