Fifty-five Greenpeace volunteers have scaled the walls of the Houses of Parliament and are now occupying the roof to call for for a new style of politics in Britain, one capable of rising to meet the challenge of climate change.

Tomorrow MPs return from their summer break and the government's own Committee on Climate Change will publish a progress report on UK carbon emissions. They make it clear that Britain is not doing enough to meet its commitments, and insist that a "step change" in emissions cuts is needed. With just 60 days go until the critical climate summit in Copenhagen - which faces a very real chance of failure as things stand - Britain has yet to show true commitment to making the process a success. We need politicians who are thinking about the next generation, not just the next election. 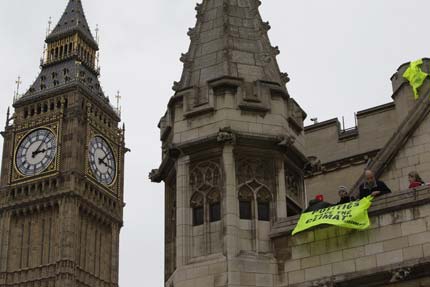 The climbers have unfurled a banner on the roof of the Palace of Westminster's Great Hall which says: "CHANGE THE POLITICS, SAVE THE CLIMATE." They are vowing to stay on the roof overnight so they can welcome politicians back in the morning.

Before breaching Westminster security they told police officers exactly who they were, making it clear that they were about to embark on a peaceful protest.

Five of the volunteers - all of them experienced rope access experts – then climbed up the building's 15m lightning conductor to the roof’s apex. They are now out of reach of security guards, and plan to stay up there for the next 24 hours.

Anna Jones is on the roof of Parliament and says: "We need a green economy that will create jobs and bring prosperity while helping us beat climate change. We need politicians to be fighting for the next generation, not just the next election."

The other protesters are on a lower roof, equipped with tents and enough food and water to maintain an overnight occupation. They've issued a climate manifesto and are asking all politicians to sign it. It lists twelve simple steps our politicians could take to quickly cut Britain's carbon use, and to provide the help poorer countries need to develop clean energy, adapt to the impacts of climate change and protect their rainforests.

Our manifesto includes ruling out all emissions from new coal-fired power stations, ending airport expansion and delivering on the clean energy revolution that would see Britain harness the huge natural resources of our wind-swept island to build employment, develop new green industries and cut pollution. People say they get into politics to make a real difference. Well here's their chance.

The clock’s ticking down to the big climate summit in Copenhagen, but politicians are still treating the most important issue of our time as a political plaything. We need a green economy that will create jobs and bring prosperity while helping us beat climate change.