A handful of No Borders activists held a protest on Friday, 9th October, outside (and inside) Becket House immigration reporting centre in south London, demanding the immediate closure of this horrible place. After 'intimidating' staff and security guards with their 'scary' banner and leafleting passers-by, protesters had a tour inside the secure car park, where snatch squads' and G4S vans were waiting to take detainees arrested there to detention centres across the country. 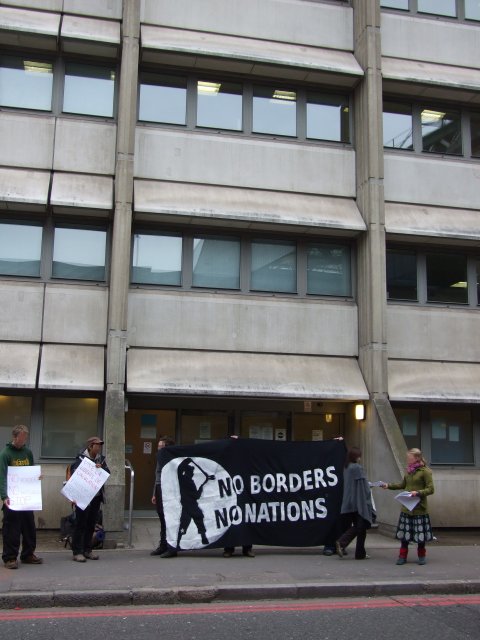 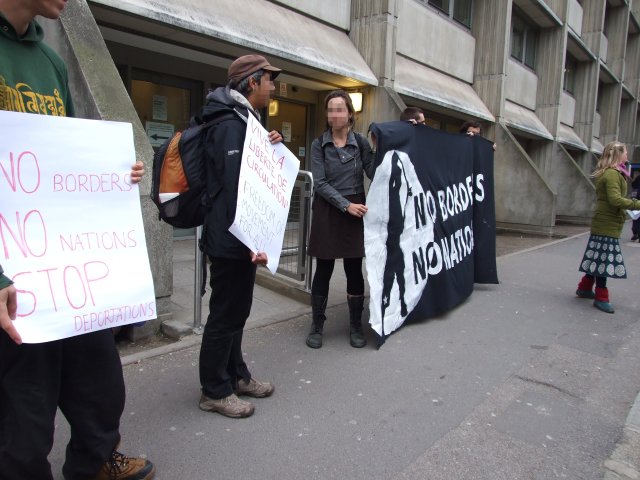 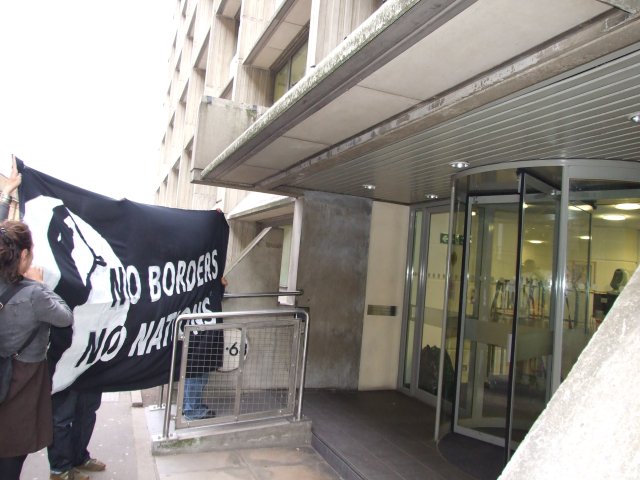 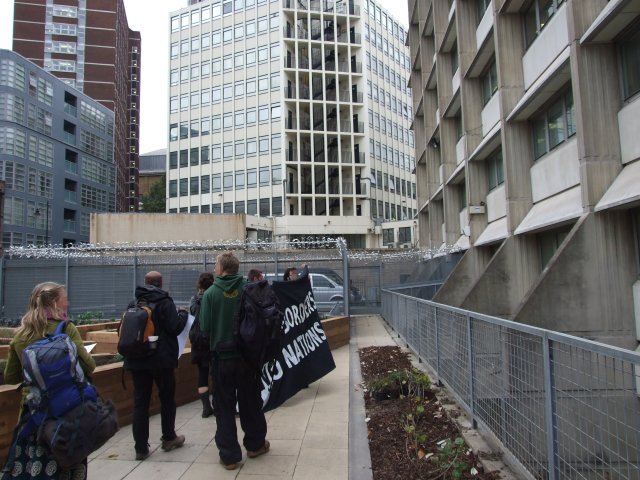 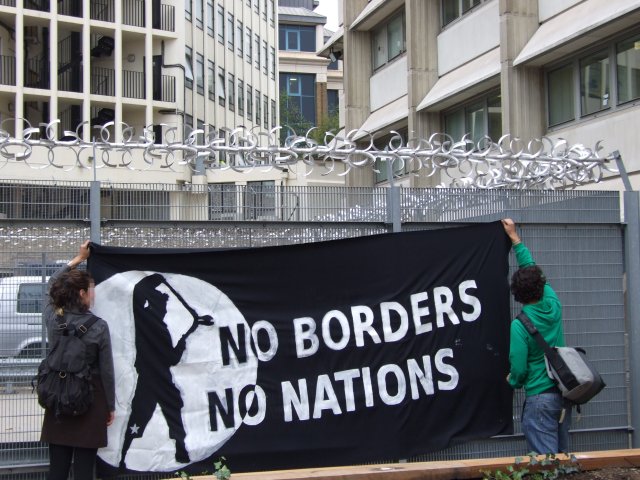 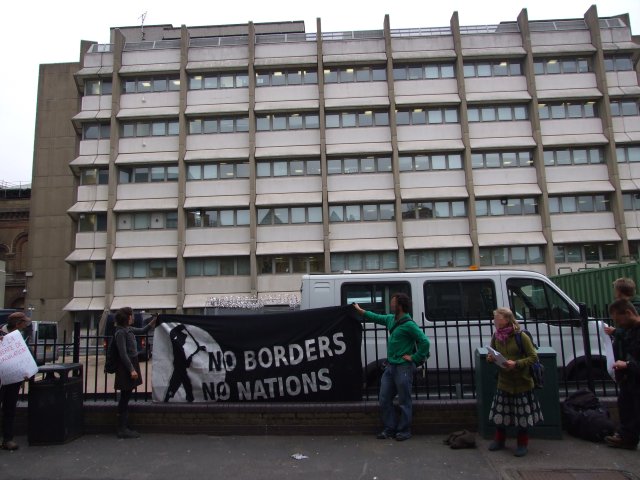 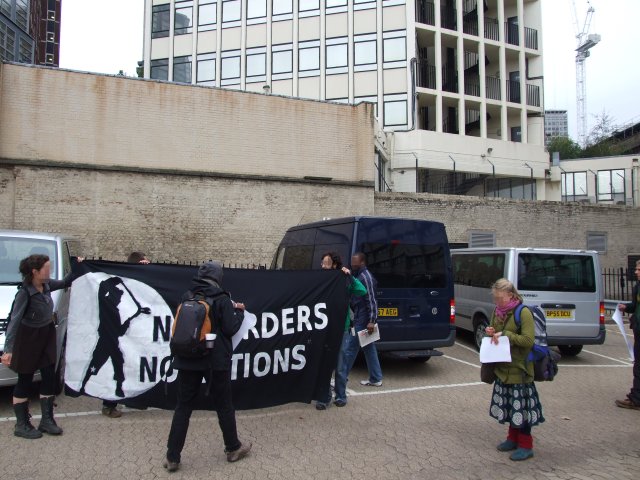 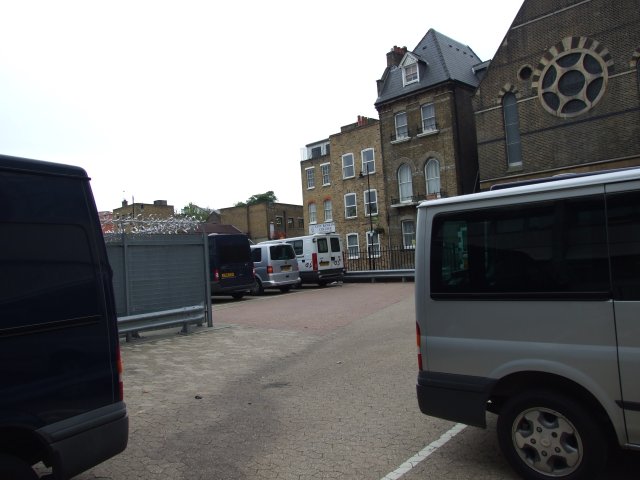 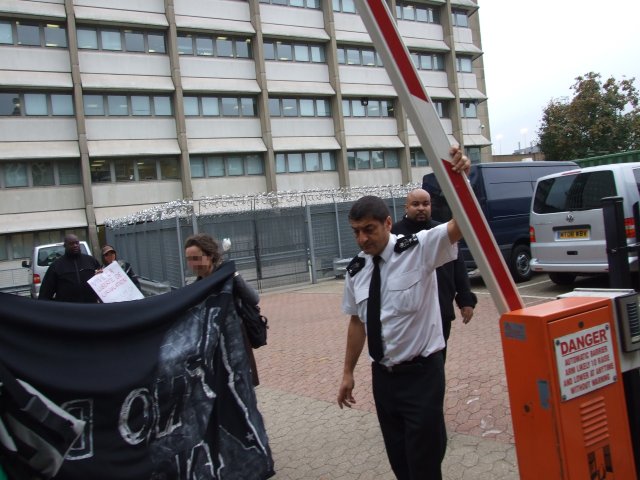 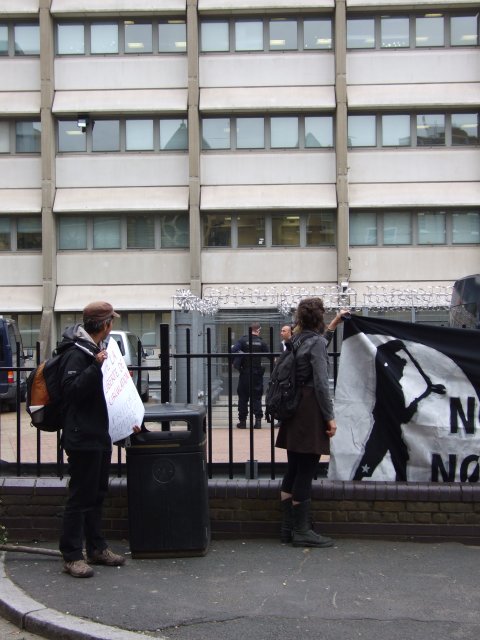 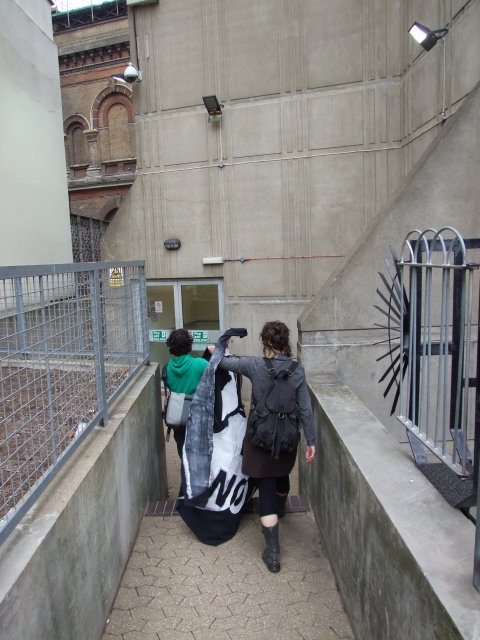 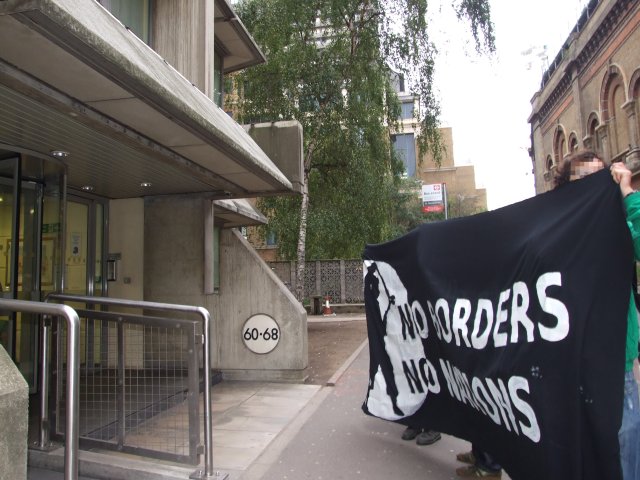 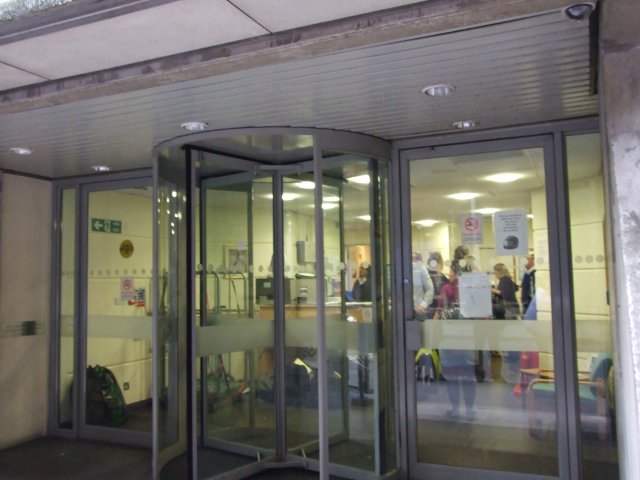 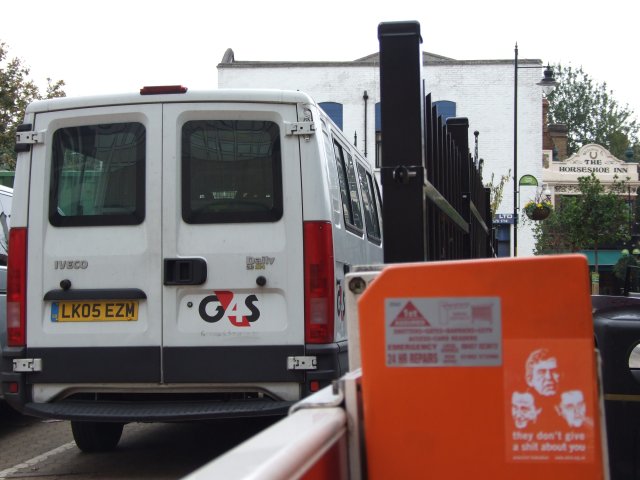 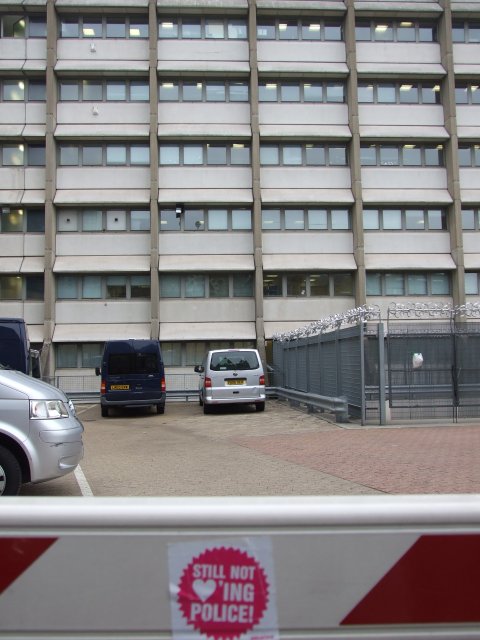 Becket House (60-68 St Thomas Street, London, SE1 3QU) is the UK Border Agency's immigration reporting centre and 'enforcement unit' base for south east London. Thousands of people subject to immigration controls are forced to come here on a regular basis (daily, weekly or monthly) to 'sign on', which involves finger-printing and re-activating their biometric ID cards. Many of them have to travel long distances and spend a significant amount of the already little money they are given on bus fares. There is no justification for all this hardship and humiliation other than the immigration authorities' wish to make life more miserable for refugees and migrants so that they give up and leave, as well as deterring others from coming here.

Many people have disappeared from there without warning. Becket House is provided with a so-called short-term holding facility (STH), which consists of two adjacent secure cells behind the reporting centre. Most people detained in these 'holding rooms' are arrested without warrant in the reporting centre while signing on, but a significant proportion are brought in by snatch squads in prison vans who operate from there and forcibly snatch families and vulnerable people in dawn raids in the area. Those detained are held in the STH for lengthy periods of time, before being transferred to immigration detention centres around the country, such as Yarl's Wood in Bedfordshire, Tinsley House and Brook House at Gatwick airport, and less frequently to Colnbrook near Heathrow. However, Becket House logs show that detainees are regularly transferred to the nearby police station in the evening because there are 'no available beds' in detention centres. Detainees then face the prospect of being forcibly deported back to war zones or oppressive regimes from whence they had fled.

Becket House is run on behalf of the UK Border Agency by Group 4 Securicor (G4S), which also runs a number of privatised detention centres across the country and is the UKBA's main contractor for detainee escort services. Private contractors such as G4S make huge profits out of people's misery, while delivering poor services. G4S has been repeatedly criticised by the Chief Inspector of Prisons for “settled misery” in their detention centres, the lack of information provided to detainees about the availability of legal aid and such like. In Becket House, detainees are not offered a free private phone call or allowed to fax documents to their legal representatives. Furthermore, the reasons for their detention and other relevant information, such the possibility of applying for bail and sources of legal advice, are not provided or fully explained in a language they understand.

Well done, No Borders! Seeing this really cheered me up on a cold, dull Monday morning :-)

What was the "They don't give a shit" sticker (visible in one picture) about? I can't read the smaller writing. I don't think it's to do with immigration.

nice one. What's happening on our own doorstep is just not getting enough media coverage, so any action like this is good. Doing nothing makes us complicit in human rights abuses. Many of those deported will face persecution and death - we already know of several cases of people 'sent back' to be murdered.
Back in WW2, people in Europe claim they didn't know what went on in concentration camps, deportations, abuses etc. I don't know about that. It's true there was no internet then, no free press, few dissenting voices that were 'disappeared' immediately. We have NO such excuses. We have that freedom to shout about injustices (even if it's being limited all the time). We don't risk being shot for our views. What many of us lack is the motivation to get off our arses and do anything. So again, well done no borders friends...
Great banner by the way!

It's good to show up Becket House for a change. We do regular demos at Communications House but haven't managed to do Becket House so far. Keep up the good work.

'The greatest ignorance is the conceit that a person 'knows' what he does not know.'