Free At last, after 72 days, the 36 Ashraf residents, who had been abducted, were released and safely returned to Camp Ashraf.
Many of the hostages, who were on a hunger strike, are seriously ill but in a very high spirit. They were immediately taken to Ashraf medical center for treatment. 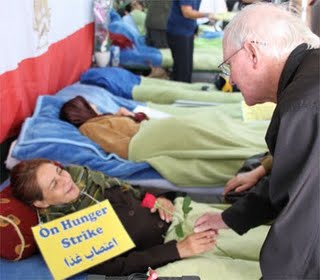 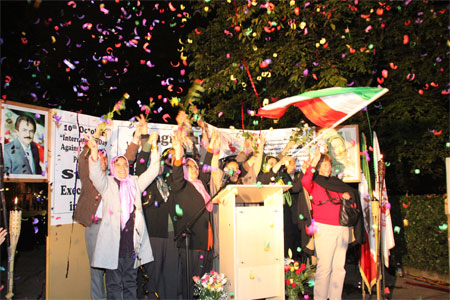 “Greater love hath no man than this, that a man lay down his life for his friends”

Mrs. Rajavi, Iranian opposition leader, who had repeatedly asked the hunger strikers to break their fast, sent a video message via satellite television to express her joy and commended their decision to end their hunger strike. President-elect of the Iranian resistance thanked Iranian compatriots, Iraqi officials and tribal leaders, members of parliaments and jurists, international human rights organisations across the globe for their relentless efforts to release the 36 hostages.

Twelve people in UK and hundreds more in 21 countries started to fast which continued for more than ten weeks in solidarity with abducted Ashraf residents in an attempt to convince international authorities to help with release of the 36 fellow Iranians taken hostage in a violent raid on Ashraf in July.

Upon hearing the news of the hostages’ release, everyone was crying, dancing, singing in the street in Grosvenor square in front of the US Embassy.

Celebrations continued late into the night. It was a truly wonderful end to a long rally for humanity, justice and love.

The Archbishop of Canterbury, Dr Rowan Williams, the vice president of the European Parliament, Dr Alejo Vidal-Quadras, and the former Prime Minister of Algeria, Sid Ahmed Ghozali, and thousands of parliamentarians, jurists, human rights icons, dignitaries and personalities across the world condemned the Iraqi regime for failing to release the refugees, despite three separate rulings by Iraqi judges.

Amnesty International joined the chorus of voices denouncing the actions of Iraqi Prime Minister, Nuri Al-Maliki with another Urgent Action appeal which was its 12th statement since the ordeal started.

The hunger strikers chanting: "This is a huge victory for the people of Iran, for democracy, for humanity”.

However, the return of the hostages is just one of the hunger strikers' demands. They vowed to resume their fast if UN and US forces did not agree to monitor the camp and provide security from Iraqi forces.
Source:
Free-Iran.Com: 36 Ashraf Hostages were released