Eviction of the new squat in Vienna – call for solidarity actions!

On the 2nd of October we squatted the Triesterstrasse 114, an old school building in the south of Vienna to establish a houseproject: a space for self-organised, non-commercial projects and communal living. The initial concept was to have an action-week with programs and discussions there and force the city to talk to us (which they otherwise don't do). We got violently evicted today (12 of October) and therefore we call for solidarity actions! 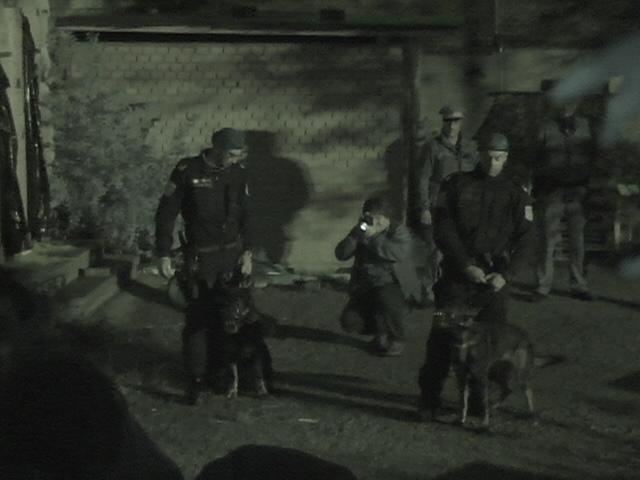 It's about half past 4 in the morning, 12th of October. A men dressed up in helmet and black military-type clothes and with his face masked smashes the window of the dining hall on the ground-floor in the empty school-building we're staying in, without any earlier warning or sign of attack. After him a whole line of military-like police forces march in and they give orders in german which I don't understand. Some people are screaming, the noise wakes up the people who are sleeping in the upper floors, we all run upstairs, after some short coordination-discussion we decide to go into one of the rooms on the top floor, sit on the floor and wait to be carried away by the police forces. After some minutes of waiting, it might be around 5 am or so, the units find us and warn us in german to leave, or this is more or less what I understand from the situation. We ask for translation several times which we didn't get at all. We ask about any order of eviction, or about our rights, and none of our questions get listened to, neither when we explain that we actually know our rights, they simply ignore them. Then they take us one by one, we show passive resistance while being carried down the three or four floors.

Sounds like it's from a diary from the second world war. But it happened like this in 2009 in Vienna, Austria. On the 2nd of October we squatted the Triesterstrasse 114, an old school building in the south of Vienna to establish a houseproject: a space for self-organised, non-commercial projects and communal living. The initial concept was to have an action-week with programs and discussions there and force the city to talk to us (which they otherwise don't do). The building is owned by the city (the MA34 - Magistrate for Construction and Building Management deals with it). Over 80.000 flats in Vienna are empty. Virtually a complete district waiting for self-governance and enough space for emancipatory projects. We need spaces, which are too rare in Vienna - Spaces we can take and form. Instead of negotiation, or any form of warning to leave the house, we got evicted violently and the police forces and the private securities broke several rules during the process. Later on from the security organisations we got to know that it costed all together about 400.000 euro to evict us today (and it's not illegal to squat in Vienna, however the authorities try to tell you that, but it's not a crime). They destroyed parts of building, and have thrown out another theatre group that was using a separate part of the building, they had a legal contract with the city and now have to face difficulties and most likely lot of debt because their equipment got destroyed and because they cannot prepare for their next show. It seems like the police and the city don't even know which buildings and rooms are rented legally, and what real estate has been squatted, and because they act without communication, they find it out too late.

When I look into the eyes of these robocops who try to ignore us and later on during the day when we go and occupy the city council offices (Stadtrat) to force the authorities to talk to us and there in the office building when I look into the eyes of the bureaucrats and security guards, I see the remote control behind them. I see the routine, the acting on command only, the lack of self-determination, the lack of the possibility to make their own decisions, to have control over their own lives, and, what is more important, the lack of personal commitment and desire and ambition and personal determination. The love and rage. This is what we have and solidarity with each other. They have weapons and they have the law and the politics, but we have each other and although today dozens of our tools and materials and dreams have been damaged by the police forces, on the command by the city of Vienna, and even though we will most likely also feel destroyed and wasted for the coming days, we still have each other, our desires and our will to fight for them, no matter what! No pasaran! They won't break us! They make us stronger when they draw a clear line between us and them! And while they cannot take a step without a command, we can decide our own moves, and we support each other not because we have to or because we get paid for it, but because we have trust, we have love, we support each other and have solidarity!

The repression is growing, the anti-squatting forces are pushing the frontline to defend private property supreme to anything else! But the need for housing and social spaces doesn't lessen in the fight! The don't obey the rules even though they themselves make them. We not only demand our rights to be taken seriously, we will not be satisfied with that because those rights are not defined by us anyway, but it is in the hands of the elite! We will go on fighting for free housing, freedom of movement, and free social places, against state repression, private property, exploitation, sexism, racism, and in general capitalism, and we call everyone who doesn't agree with the supremacy of private property to support us in our struggle by all means possible and all means necessary! We call for local, regional and international solidarity actions against all forms of state repression against squatting in Czech Republic and Austria and all over Europe and the world!