For Immediate Release: Direct Actions this morning in solidarity with Calais migrants

!!!!
Calais Migrant Solidarity this morning has received three reports by email of direct actions made in and around Calais in solidarity with the 100s of migrants in the area at the receiving end of constant police harassment and violence.

#1 "Several banners were last night hung from bridges over the A16 Dunkerque-Calais and the A26 Calais-Paris road reading 'Solidarite avec les migrants'. We took these actions to draw attention to the less publicised conditions of migrants in Dunkerque and along the northern French coast who are forced to live in make shift shelters as they wait a chance to cross the channel to the UK. Many of these people are fleeing persecution and war that the EU is enagaged in. We believe these people have a right to move freely to safety and should be treated with respect not the constant police violence that has been evident these last years, months and particularly last weeks in Calais where migrants have been temporarily detained while their shelters are destroyed, only to be dumped back on the streets again. These state and police actions are inhuman, counter-productive and we believe illegal. No person is illegal - No borders are necessary - Freedom of movement for all"

#2 "The fountain opposite the town hall in Calais was this morning filled with harmless red die to symbolise the blood on the hands of French Immigration minister Eric Besson and UK Home Secretary Alan Johnson. Besson is the worst kind of politician, flitting from left to right, by his wife's recent allegations a constant liar and cheat, seeking to advance his own position by standing by as 'jungles' in Calais are razed, calling them 'inhuman conditions', conditions his policies have created - making people seeking safety and help malnourished, unable to access basic medical care and despite his claims not given the possibility of making asylum claims with due process. Among these people by the police's own reckoning about half are children, many seeking refuge from the wars we have created. We owe these people dignity, not the 'delight' expressed by Johnson as their basic shelters are destroyed and they are displaced yet again. The UK should take responsibility for the human fallout from its illegal wars and let these people into the UK. Calais is the shame of France, the UK and all of Europe. Governments have failed here, only solidarity between people on a human level can make any sense of this brutal daily trauma. No Borders! No Nations! Freedom of movement for all!"

#3 " In solidarity with the migrants of Calais we would like to report that at around 3.30am this morning the Coquelles police/detention/law court complex south of Calais had it's main vehicle gate and both pedestrian access gates locked shut with heavy duty chains and padlocks. This was an attempt, however brief it may have lasted, to disrupt the daily dawn mobilisation of CRS police units to terrorise migrants 'jungles' and squats with their gas and batons. Enough violence! Enough fascism on the streets of Europe! Fuck Besson! No Borders! No Nations! 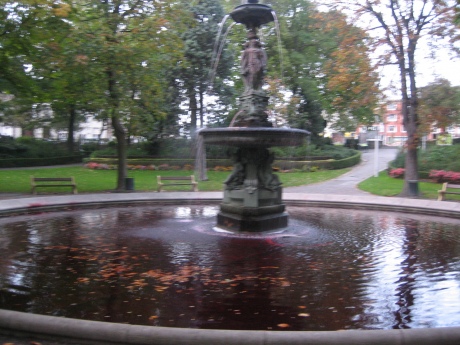 poor quality pic, but it's red!