Several thounsand Tamils marched through London on Saturday 17 Oct 2009 to protest against the continued detention of civilians in Sri Lankan camps, calling on the UK government to press for their release. Photo Copyright (C) 2009. Peter Marshall 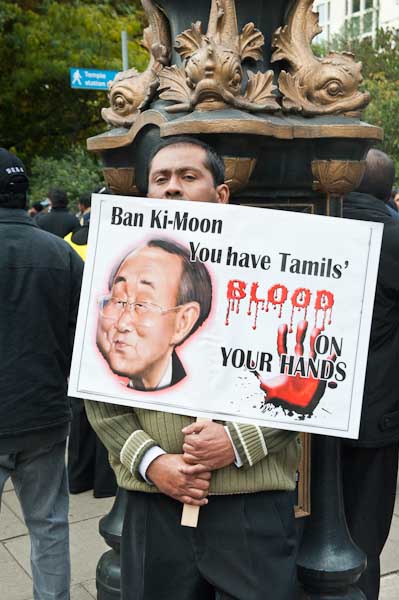 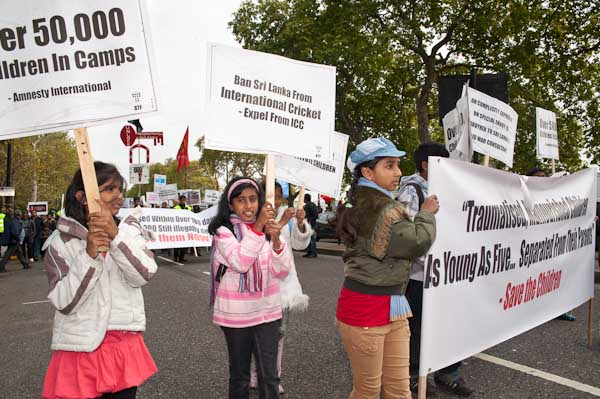 Children with banner and placards 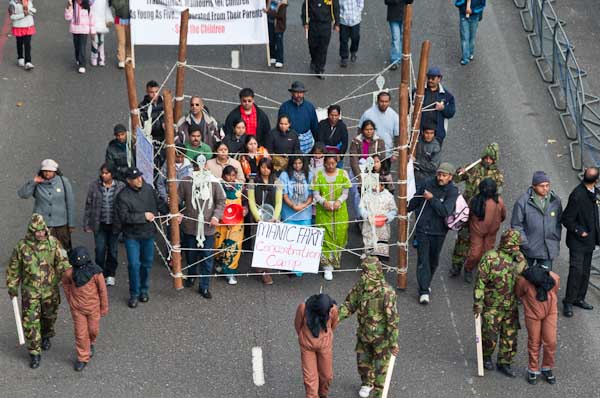 'Camp' at the front of the march 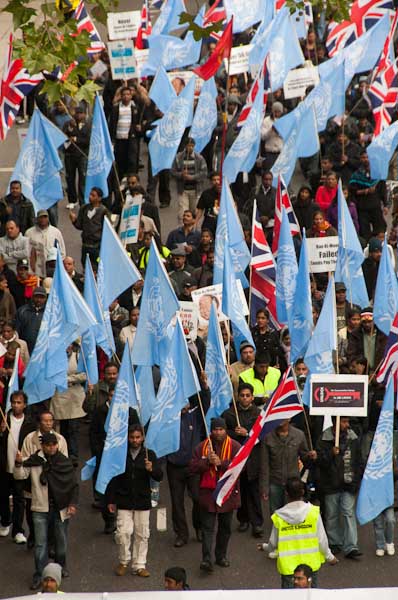 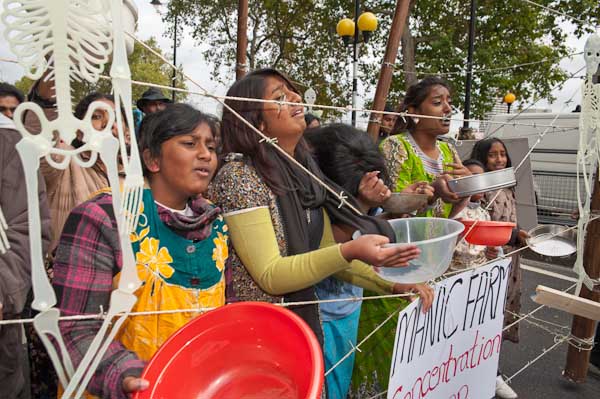 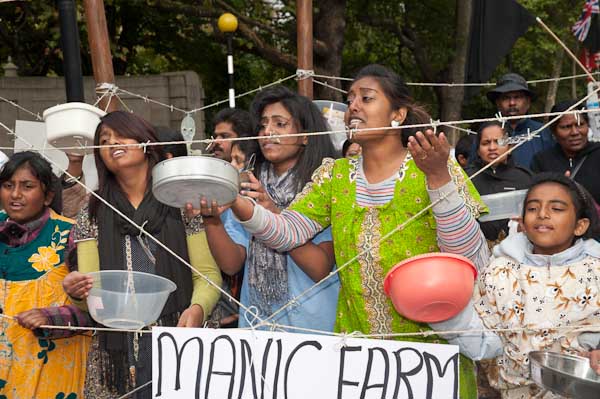 Several thousand Tamils marched through the centre of London today to protest against the continued illegal detention of over 280,000 Tamil civilians - including at least 50,000 children in miserable and squalid conditions in camps run by the Sri Lankan military.

At the head of the march was a small 'camp' with posts and 'barbed wire' holding a number of protesters, and in front of it several 'hooded detainees' were harangued and threatened by 'Sri Lankan Army' guards.

Reports from the camps in Sri Lanka are limited, as the Sri Lankan government severely restricts access by aid agencies and international monitors and the international media, but they have told of crowded tents, inadequate sanitation - with one toilet for every 200 refugees, inadequate water supplies, food and medical facilities. There is widespread malnutrition and jaundice and other diseases spreading fast.

According to 'The Times', more than 1400 people die every week inside the camps, and they are certainly very much overcrowded, with Amnesty International reporting a population numerically equivalent to that of Bournemouth being confined in an area the same as Wembley Stadium.

In a letter to Prime Minister Gordon Brown, the British Tamils Forum, organisers of the protest, detailed their deep concerns, pointing out that although the Sri Lankan government had announced that it would release 80% of the detainees within 180 days, more than 150 days later only round 20,000 of the 300, thousand - around 7% - have been released.

The situation in the camps is unbearable, and in one recent incident six unarmed people including a woman and three children were shot as they tried to escape. They warn that conditions will worsen dramatically with the impending monsoon season, as the camps are expected to flood.

They also accuse the Sri Lankan military of massacring over 20,000 Tamil civilians in the last few days of the war and of now systematically destroying the evidence of this in an attempt to avoid war crime prosecutions.

The Tamils have completely lost confidence in the UN Secretary General Ban Ki-Moon, who failed to take any action to save the refugees trapped in the 'Safe Zone' who were killed in the shelling. They ask that the international community should actively object to his reappointment as General Secretary.

The protest also called on the UK government to demand :

- that Sri Lanka immediately release the Tamil people, and give full access for the UN, Red Cross and aid agencies to the camps to help them return to where they choose to live.

- that a full list of those detained is published - many families do not know whether their missing members are still alive.

- that those detained as alleged LTTE (Tamil Tigers) be treated according to international law and be given access to legal representation,

- an end to activities such as building Buddhist temples designed to destroy the character of the Tamil areas.