see decommissioners.co.uk
the three people arrested for breach of bail at the Target Brimar demonstration have been released. They were taken to Oldham magistrate's court this morning but the prosecution did not present any evidence. 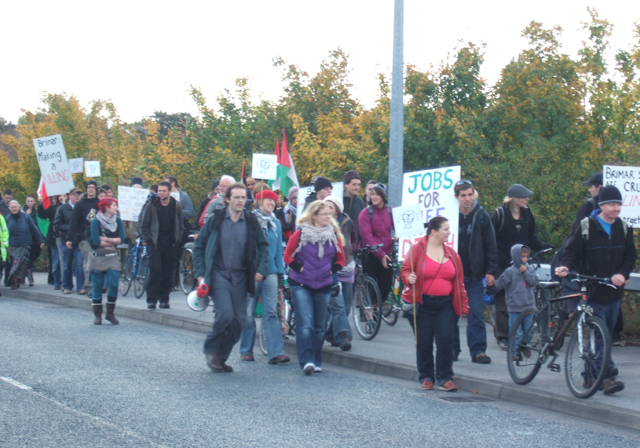 The three were taken to Oldham court on Monday 19th, the prosecution first tried to charge the three with ‘Associating’ with each other. Realising this wasn’t actually one of there bail conditions the charge was changed to ‘communicating’ with each other. Realising there was insufficient evidence to prove the defendants had communicated with each other, the charge was changed to ‘indirect communication’. Once again realising there was no evidence to prove this, a final charge was weighed against them, this was unbelievably ‘likely to break bail conditions’ then all of a sudden the clock struck 13:18 and all charges were dropped because of a time-out. For if your arrested on breach of bail it has to go through the courts within 24 hours (Sundays not included).

FREE THE EDO 9
RESISTING WAR CRIMES IS NOT A CRIME.