mainstream media quickly gave you names as usually before they get to know you. well as i got to know you first i thought to remind some people who u really were! 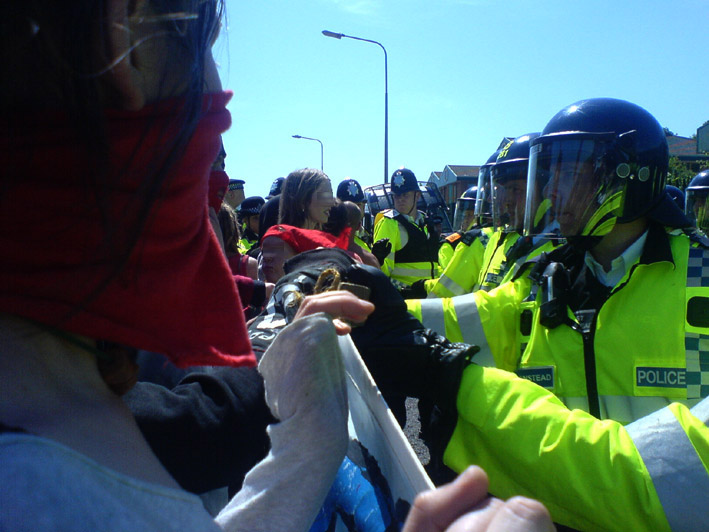 Animal rights vegan activist who also atended various smash edo and other brighton campaigns, always respectfull intellectual her only mistake was that she trusted everyone. 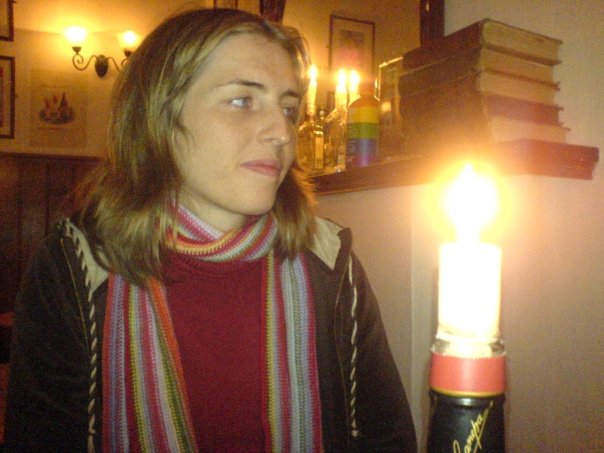 On the way back from the smash edo protest 4-06-08 we met randomly and talked about the day, and our experiences and then went our separate ways.

Whilst I was going through the pictures I had taken from that protest and I saw Andrea in one of them (original picture posted from demo) . It was weird cause the next day I was walking down the stairs in the building where I lived and I saw her again. I thought to myself nah it cannotan be her...

Anyway a few days later I saw her again this time I was convinced to talk to her and ever since we became friends. Andrea was quite a charming person always made an effort to talk to you. She was good hearted. You could notice this from the smile on her face when she approached people. She always wanted to help and was open about most things. She was never judgmental or egocentric and she always gave the impression that she cared a lot about her listener. In fact she was a very outspoken person and honest about her opinions. Together we attended various Brighton social and political events and she seemed very considerate in terms of her social and political beliefs and ideas. She never wanted her physical condition to get in anyone’s way so she never mentioned anything directly and only became noticeable when she wanted some help with carrying stuff around.

It was strange reading about her condition from the media after her murder. Even though I had knew her I really did not know everything about her. She had a healthy happy life going to the gym on a daily basis and whilst working in a therapy shop in the area performing body massage.

Andrea was a libertarian alternative mind and very mindful about what’s happening in the world including foreign politics on top of all her animal rights activism. We spent time together in my tiny flat, listening to music talking about or lives whilst drinking tea and enjoying each other’s company. Talked a lot about animal rights and vegan life as she was the first vegan person I had ever met. I was intrigued which lead to many interesting conversations trying to understand the reasons for being a vegan and how it impacted on her lifestyle.

Then there was the times when she was preparing leaflets for animal rights campaigns and wanted my opinion or some help. She never tried to push people to accept her beliefs and always wanted to discuss things when in a conversation and be open about it. She never considered herself perfect and saw life as an endless opportunity to experiment and experience with things. We had countless political conversations together and will never forget her passion and patience when talking with her.

Summer came and Andrea left to go travelling in Thailand Again I felt lonely because I really did not know anyone besides her in this new town I had moved to. I spent many days alone in the sea front waiting for some new friend or anything. Then after the summer Andrea was back I told her all about this lonely summer and straight away she offered me to go out and meet some of her friends. I was so lonely that initially I thought to say no, but she insisted. Then I got to know a whole new circle of friends through her of which I am still really good friends with. They all are devasted from the recent bad news.

Andrea was a loving person and I m sure everyone who knew her must be empty about her tragic death. She was a beautiful person inside out and I feel really sorry about what happened to her and her family. My sympathy and condolences go to all her relatives and friends.


To the most enygmatic smile i ve seen in life i will always remember you...

As Andrea's brother I'd like to thank everyone for the kind words and messages on this page, especially her friend Zac who I believe wrote the tribute. (Zac - it would be great to get in touch; my email is

We don't have a date for Andrea's funeral yet, as the police investigation into her death is delaying everything, but we hope it will be sometime in mid November. I'll try to post a message here with the details when we have them but anyone interested can also contact Arka Original Funerals on 01273 766620 for details when they become available.

http://www.gscene.com/local/Book_of_Remembrance_opened_for_murdered_woman.shtml) and in Manchester on 22 November (see

http://theangels.co.uk/2009/10/manchesters-annual-transgender-remembrance-vigil/). The whole family will be at the Brighton service and my partner and I will be at the Manchester one.

It would be lovely to see some of you at one of these events. Make sure you say hello and let me know either how you knew Andrea or how you were affected by her untimely death.