Why prisoner support is important

The following article has been written by Brighton ABC, with input from other ABC activists and random anarchists. It is due to be included in the copy of Freedom newspaper available at this Saturday's London Anarchist Bookfair. It reflects on the generally low-level of prisoner support & solidarity within our movement, and why we should increase it. Read it here if you miss it at the bookfair.

Brighton and Bristol ABC will have stalls at the bookfair, alongside other prisoner support and anti-prison society anarchists. Come and chat to us, or come along to one or all of the 3 meetings Brighton and Bristol are co-ordinating:
1pm (room EB2): Too many prisons, Not enough justice
2pm (Skeel lecture room): Greece - repression and resistance on the streets. Latest news & analysis.
4pm (room EB4a): Anarchists for prison abolition 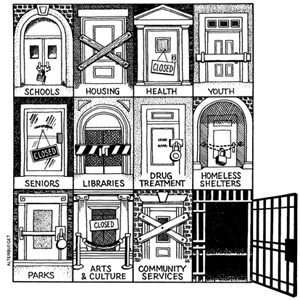 Government social policy - a prison society for us all

Why Prisoner Support?
Prisoner support should be an essential facet of any anarchist’s political activities; yet our prisoner support groups attract so little actual support from our fellow anarchists. Why is this?

Of course, it is natural for us to support someone we are close to, friends and family or even a comrade from ones affinity group, when they are banged up. Yet why do so few anarchists support comrades from within the wider movement, let alone prisoners in general? Mutual aid and solidarity are surely a central tenet of the anarchist ‘belief system’, one brick that any anarchist society should be built upon, yet it is something that often doesn’t extend beyond one’s immediate environment (family/friends/affinity group).

Not Sexy Enough
We all know that prisoner support is not particularly glamorous or possibly rewarding in terms of apparent immediate effect: we don’t see our circle A spray-painted on the wall, cashpoints superglued-up, disruption caused by a picket or the reality of an article appearing in our favourite organ of propaganda (though most of those can also be used as a weapon in any prisoner support campaign). Instead, prisoner support is largely invisible, the writing of letters, the sending of money and the giving of other practical support. Yes, we might go along to a gig raising funds for prisoner support but are we doing that to donate funds or because we want to see the bands?

We might read a call-out for support for a particular prisoners’ campaign but are we really paying much attention? Or are we going along to prison pickets when they are called? This is in fact one really simple and effective way of showing solidarity and support for individual prisoners, as well as showing the managers of these factories of repression that we outside the prison walls know and care about what they are trying to do to our comrades, those we chose to support, on the inside. And prisoner support groups regularly get feedback on these events showing clearly that they work, that the prison authorities take notice and are much less likely to abuse the prisoners supported.

Certainly Not Trivial
Writing letters too may seem a trivial method of showing support for individual prisoners but it is a concrete and practical starting point, and one that also very readily lets those on the ‘inside’ know that those on the ‘outside’ are thinking about them and showing them solidarity.

But there are so few anarchist prisoners I hear you say. Yes, it is true that the level of struggle in this country is very low and that too is reflected in the level of struggle within the prisons too, but that is no reason for being complacent. Anarchists surely should be seeking out class struggle activities to support wherever they occur, both inside prisons and in the wider communities, in the UK and abroad.

Despite the poor showing in the international exchange rates of that last bastion of Empire ‘the pound in your pocket’, our filthy lucre still goes a long way in certain parts of the world, particularly in Eastern Europe and South America. So there’s one area where practical solidarity is still valuable.

Another is taking your solidarity to the streets. A classic example of this is the Greek prisoners’ hunger strike in November 2008, when most of the prisoners in Greece’s 21 prisons went on an 18-day hunger strike in support of a comprehensive 45-point program of prison reform. Mass demonstrations and numerous solidarity actions outside the prisons in support of the hunger strike helped secure major concessions from the Greek state, concessions it could be argued that would not have been so easily won without such open displays of solidarity.

The Social Prisoner ‘Problem’
Which brings us to the so-called ‘social prisoner’ issue, which has long been a problem within the anarchist movement, with the more liberal elements in the anarchist movement decrying any involvement with ‘common criminals’. Fortunately, most anarchists involved in prisoner support see it in a somewhat different light.

If you are a long-term prisoner in any prison system, you have two options: either you do the ‘bird’, knuckle down and toe the line, making as little trouble for yourself as possible; or you stand up as an individual and fight for your dignity and the dignity of other prisoners against a system that is designed to squeeze that dignity out of everyone. Prison after all is still, despite what all the PR about rehabilitation and behaviour modification therapy would have us believe, designed to punish the individual prisoner, to make them not want to return and therefore not commit that next ‘crime’ that might earn them more time.

Therefore, when we come across prisoners who have become radicalised by the prison experiences, who are engaged in the class struggle against the system of social control that is prison, we should be supporting them in their struggle. After all, even the most cynical anarcho must see that we as a movement need to get the idea of a non-hierarchical decentralised class-free society more widely accepted and those at the sharp end of the state’s system of social control and conditioning should be more receptive than most.

Also, from a purely selfish standpoint, when the few anarchist prisoners that do end up inside are looking around for comrades to engage with in resistance to the prison regime, history has taught us that it is these social prisoners that anarchists make common cause with in struggle. So logically we should be showing them solidarity now, not waiting till it becomes merely a reward for the mutual aid and solidarity that they have themselves shown our imprisoned anarchist comrades.

Revolutionary Solidarity
Just as prisoner support should be more than just first aid to fallen comrades, support for other class struggle prisoners should be a conscious act of revolutionary solidarity, of practical everyday anarchist politics. Prisoner support also cannot be reduced to just a form of charity, writing a few letters to a prisoner or bunging an ABC group some spare cash. Prisoner support should in fact be seen as part of a wider revolutionary solidarity, which anarchists of all flags should be actively engaged in. It should be an integral part of the anarchist struggle, both against the prison society and in support of the new society we wish to see built in the ruins of the old.

In the end the most important thing we all can do is to get out there and get active. It is only through struggle and building a revolutionary movement that we will help not just anarchist prisoners, but everyone in need of solidarity.

Practical Things You Can Do:
Write to prisoners – practical solidarity that entails a commitment to the prisoner we write to as well as a trip to the post office.
Financial support to prisoner support groups – we spend a lot of our time and effort fundraising, time and effort that could be better spent elsewhere.
Books to prisoners – instead of spending your ‘hard-earned’ on that next tome on anarchist history, give the money to Haven Distribution books to prisoners project.
Other letter/faxes/e-mail writing – prisoner support groups often fight campaigns at the behest of prisoners to get them better conditions/parole/even not being executed.
Organise – in the workplace and community. This is something we could all be doing. No excuses now!

Useful Info / Contacts:
You can download leaflets on ‘Writing To Prisoners’ and ‘Social Prisoners’ from: