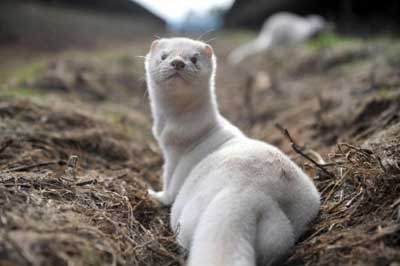 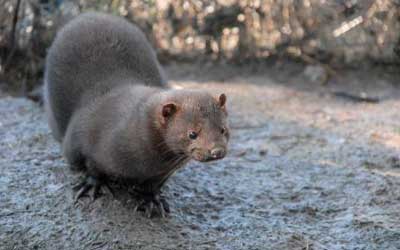 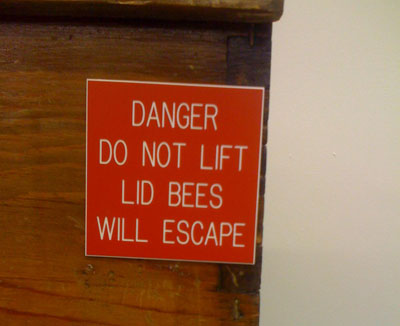 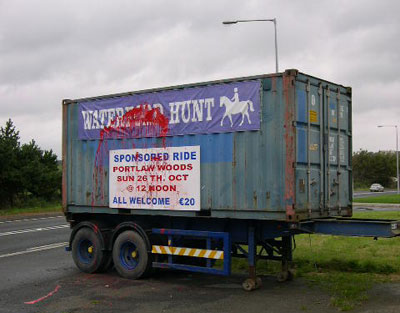 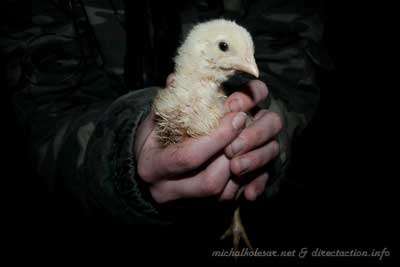 In the early morning hours of October 19, approximately 17,500 mink were released from cages at four fur farms in northern Spain.

Three of the farms were located near Abegondo (Galicia). The fourth farm was located several hundred miles away in Lubia (Soria).

In Lubia, some of the mink were recaptured, but others have been spotted miles away from the farm.

Charo Carrillo, the owner of a farm in the town of Oza dos Ríos, near Abegondo, told local media that the raid on her farm has ruined 20 years of work breeding mink for fur quality, color and other traits desired by the fur industry.
Another fur farmer, Pancho Vázquez Larumbe, estimated his losses at 300,000 Euros.

According to media reports, during the night of October 15, approximately 4,200 mink escaped from a fur farm in the village of Saint-Cybranet (Dordogne) in southwest France. Cages were opened and the fence surrounding the farm was cut. A water system at the farm was also vandalized. Two days later, only 1,000 of the mink had been recaptured.

"Sunday 18 October, Central Italy.
Windows broken on 11 hunter's cars. The hunting season has also opened for us... We only have to go to the countryside and choose our prey."

"Ismet Keles, proprietor of Next One Leather, and purveyor of fur trimmed coats recently received a visit. A message was spraypainted in the doorway, his car tyres slashed and paint stripper poured over his car.

The cruel, outdated, unnecessary suffering of animals will not go unopposed.

You know what to do.

Related article: Next One Leather Go Fur-Free After Protests

On Friday, October 16, around 3 in the morning, we, comrades from the cell of milicia incendiaria por la liberación animal (M.I.L.A) [incendiary militia for animal liberation], were ready to again hit one of the most anthropocentrist, earth-destroying multinationals, McDonald's. Unfortunately, upon arriving at our target we realized that police officers were guarding the site, at both entrances of the establishment. But we did not let that stop us from attacking the murderer capitalism. Armed with all our anti-anthropocentrist anger and assisted by 10 liters of gasoline we turned to another equally exploitive multinational, this time the target was a Burger King located in the south of the city. Upon arriving at the place, a considerable amount of gasoline was sprayed around and some bottles with more gasoline and incendiary devices were also left. After leaving all this we withdrew into the darkness waiting for the devices to do their job and the sky could be seen illuminated by the beautiful abolitionist and anti-anthropocentric fire.

The action was planned that day against McDonald's. We want to make it clear that we will not accept any reform or laws to protect and ensure a better murder of our non-human comrades in the slaughterhouse, because we do not fight for the 'rights of animals' as the reformist groups do. We are fighting for animal liberation and against anthropocentric, speciesist and dominating attitudes and we will not rest until all the cages and the bars of the prisons fall and until the exploiters are destroyed, and while a being continues suffering because of this capitalist society, we will continue attacking.

Let's turn these words into action.

"saw this sign while out and about. couldn't resist the temptation. released thousands and thousands of bees from confinement at an undisclosed location in Utah. how surprised farmer brown will be when he returns to find his precious honey bees missing. on top of that we also smashed 4 crates of honey.
...BLF... The Bee Liberation Front"

reported by activists in Ireland:

"The Waterford Foxhounds are holding a charity fun in Portlaw, Co. Waterford on the 25th of October 2009.

Road signs advertising this event have been placed on the N25 leading into Waterford city. For the past week the main sign in the village of Kilmeaden has been paintbombed with the word 'blood' in red paint written across the white board sign advertising the event. On two occasions the sign had to be cleaned. Today the Waterford Hunt banner above the white board sign was paintbombed.

Another roadside sign that was also paintbombed has been removed by the hunt."

"Greetings compañeros: A few weeks ago we rescued seven dogs in appalling conditions from a farm that breeds hunting dogs. Although an animal protection organization had been denouncing it for several months, including appearances in local newspapers, the person running the farm continued keeping dogs (although it is true that there were far fewer than in earlier reports), a horse with a wound infested with parasites, and a calf who didn't look any better. The dogs were permanently chained, without water, with their tails cut off, in a state of panic whenever anyone approached, squalid, and worst of all, full of mange, fleas and ticks. And all this, we emphasize, is despite several complaints and a visit from the Seprona [Servicio de Protección de la Naturaleza]. As always, these people take advantage of the fact that authorities ignore the complaints, since the members of the Civil Guard and the local police in those towns are themselves hunters and friends of the dog breeders, if not the breeders themselves.
We were able to rescue the dogs, but unfortunately not the horse and calf; they remain there with their wounds and without water.

With this communication we intend to make public all the information at our disposal. We include several photos of the state the animals were in. We encourage you to continue acting for their dignity, to continue fighting against what symbolizes hunting in Spain.

The details of where this liberation was carried out are:

Farm on km 35-36 on the CM 1002 road, outside of Uceda in the direction of El Cubillo de Uceda (Guadalajara province, Spain). The parcel is on the left side of the road, down an embankment.

"Graffiti against businesses that engage in animal exploitation

-The owners of the Susanne fur shop were again the target of the actions of those who defend animals. On this occasion graffiti was painted on their garage. 'FURRIER SUSANNE MURDERERS' could be read in enormous red letters. To this day the graffiti remains.

The Susanne fur shop, after continuous attacks has now hung a huge banner, 'everything 40% off.' Are they thinking of leaving? That would be a shame...

-The van from a seafood restaurant for the filthy rich appeared a few weeks ago with tires slashed. A few days later the windscreen was covered with a thick coat of white paint.

"Ten chickens rescued from meaningless suffering and meaningless deaths. They were moved to a new, safe home. Ahead of them is not a long and full life, because their genoms were destroyed so that their bodies grow faster and bear more flesh and so that the business is more profitable. But despite of it, this way they’ll be better off. They will learn what sun is and what fresh air is and what are people who do not see them as just meat and money. Spread the message."

"On Wednesday, October 14th we freed a bird who was living locked inside a cage in the warehouse of a pig farm in Teruel (Spain). We are sure the pig exploiters kept this animal deprived of freedom simply for the pleasure of seeing her day after day living behind bars. After opening the cage and watching how she flew away in the middle of the night, we made sure that cage would never again be the obstacle to freedom for anyone.

We couldn't liberate the thousands of pigs who were being exploited in that farm but we can all help many others by becoming vegan and joining the fight for their rights, because to each animal, her life is as important as yours is to you. Not bigger cages nor longer chains: empty cages and animal liberation.

"During the summer of 2009, a magpie kept by hunters to teach their hounds was freed.

Dozens of circus posters were destroyed.

The windows of a hunter's car were smashed."