Cambridge calls for the release of a quarter of a million people from de facto detention camps in Sri Lanka. 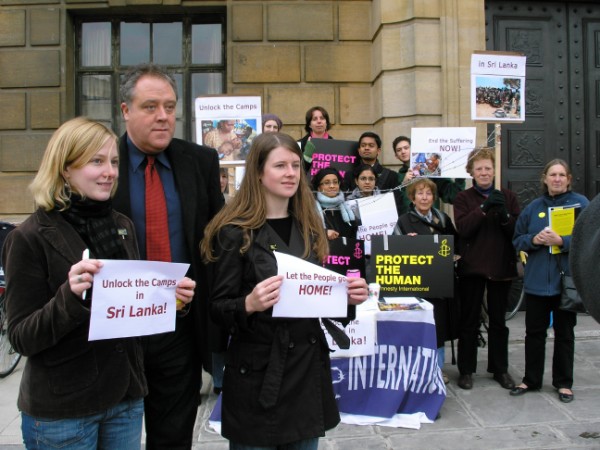 During the Sri Lankan civil war, the Sri Lankan government established refugee camps in the north of the country. Now, five months after the end of this conflict, over 250,000 people, are being held against their will in these government run camps. As these people are tamils the government wants to screen the refugees, including 50,000 children, for involvement with the Liberation Tigers of Tamil Eelam (LTTE, “Tamil Tigers”). While this screening slowly progresses, the conditions in the camps have been described as a humanitarian disaster. Currently the camps are closed to aid workers and journalists so the exact details are unknown. However, reports from escapees describe a lack of basic sanitation, overcrowding and insubstantial medical care. With the monsoon rains imminent, the camps are also at severe risk of flooding and action is imperative.

At a demonstration in Cambridge Market Square on October 26th, Local Amnesty International (AI) members called for the UK government to increase international pressure on Sri Lanka to release detainees from these refugee-turned-detention camps. AIUK’s Sri Lanka expert, Yvonne Taylor attended the demonstration and addressed the crowd on the serious nature of the crisis and the suffering of the people trapped in the camps. She encouraged people to take part in Amnesty’s postcard campaign, directly asking the Sri Lankan government to unlock the camps. Richard Howitt, MEP for the East of England, also spoke in support of the Campaign and local MP David Howarth came along to sign the petition.

The displaced people in these camps remain desperate to leave. The conditions in the camps remain appalling. Amnesty International and the residents of Cambridge are asking that the Sri Lankan government unlock the camps. The request is simple. Let aid and journalists in and let the people out.

To sign the petition to the Sri Lankan government, please go to

Thank you, to everyone who attended the demonstration.

-sorry, editorial mistake- the demonstration was on the 17th of October 2009!