Vienna – The Students Revolt in Austria which began last week with the occupation of the Vienna School of Art and spread wildly over the whole country entered today its 10th Day.

Today, four thousand people took the streets in Graz, in southeastern Austria, to protest against the continuing degradation of their study and living conditions. In early afternoon, the assembly-hall of the faculty of social sciences at Innsbruck University, in the federal state of Tyrol, was squatted by students. That means that, at the moment, lecture rooms and spaces at all principal Austrian universitys are occupied by student activists. Only the little university of Leoben, in Styria, which specializes in mining is not yet seized by the waves of protest. 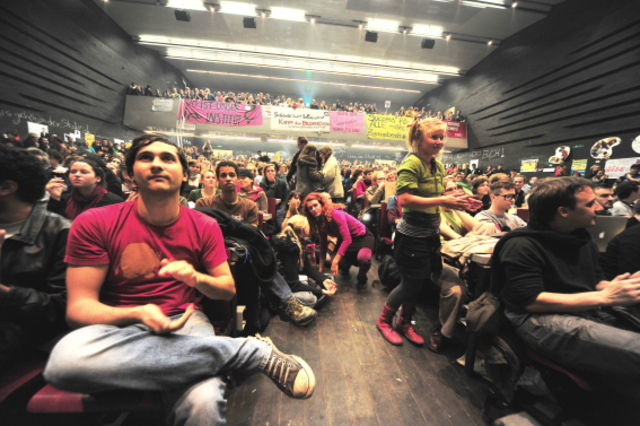 The main focus of the student unrest are the deteriorations connected with so-called “bologna process”, an European Commission programm aimed to bring the whole European higher education system into neoliberal, capitalist lines.

In a highly absurd move, the Austrian government tried to calm down the protests on Tuesday in naming Science Minister Johannes Hahn as Austria's candidate for the new European Commission, possibly for a science-related portfolio.

But on Wednesday 28th october, as many as ten thousands of student demonstrated in Vienna and other Austrian towns, calling for better conditions at their universities.

Protesters at Vienna University issued an open letter to the government, calling for free access to higher education and more funding. Their protests were a reaction to Science Ministry plans to reintroduce tuition fees and restrict access to universities.

Besides the fifty thousand that activists said were demonstrating in Austria's capital (ten thousand following the police), around five hundred students marched through Salzburg. Universities in Klagenfurt and Linz have also become venues for protests.

The students occupying Vienna University's largest lecture hall for the 8th day said Wednesday that they were waiting for a meeting with Science Minister Johannes Hahn.

"Our schedule is flexible, because we aren't going away," the letter said.

At the moment, Hahn is persisting to refuse a meeting with the squatters of the Vienna University. Today, the Minister was only prepared to meet Sigrid Maurer, the chairwoman of the state-near student union (Österreichischer Hochschulverband) for a talk which finally remained without result.

keep at it and keep us informed

Striking because the handouts arn't big enough!?
Jeez... its alright for some

The correct name for the Vienna School of Art is:

The exact chronology/dating of the protests is:

But if you count as 1st day the 22nd october (Vienna University occupation) as the students and the Austrian media generally do, then