Wind turbines on apartments. Cosmetic window dressing, an exercise in futility, as functional they are not. 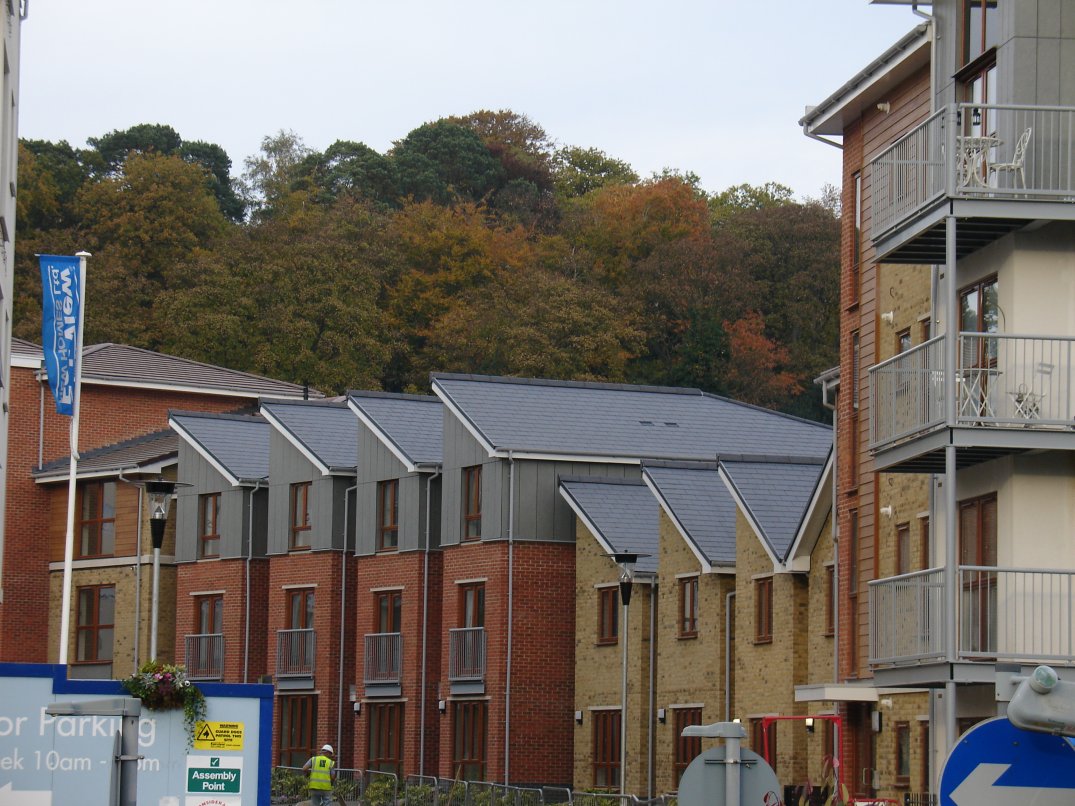 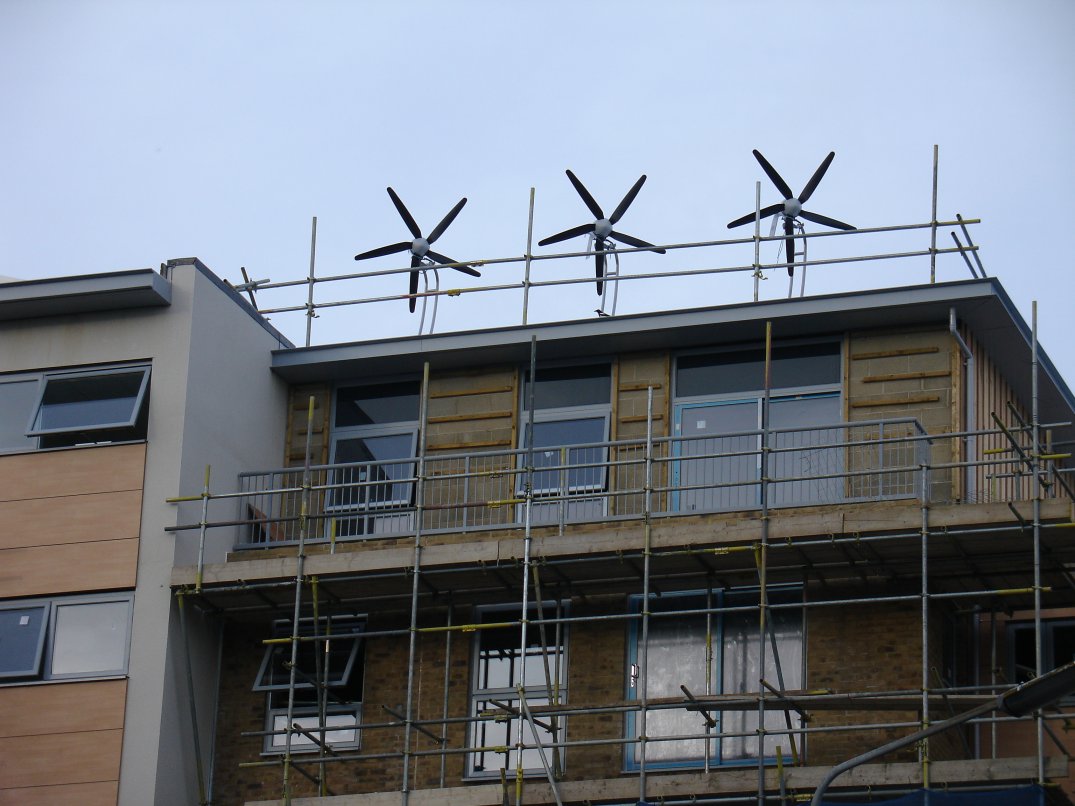 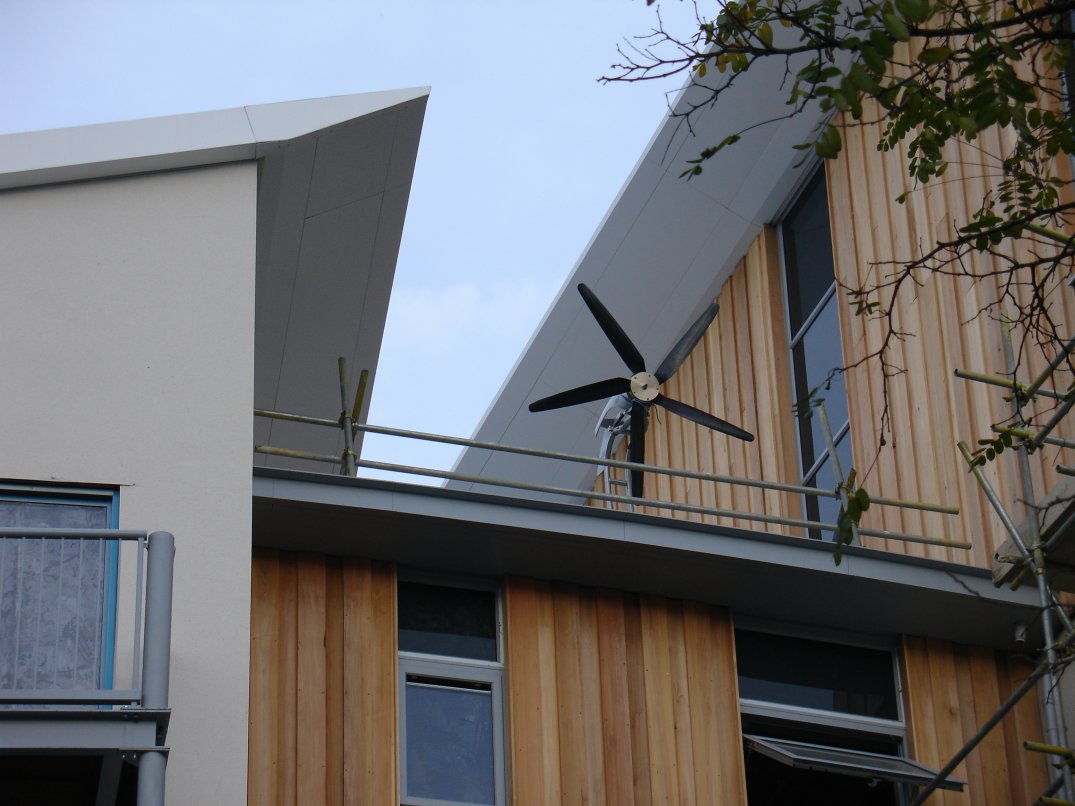 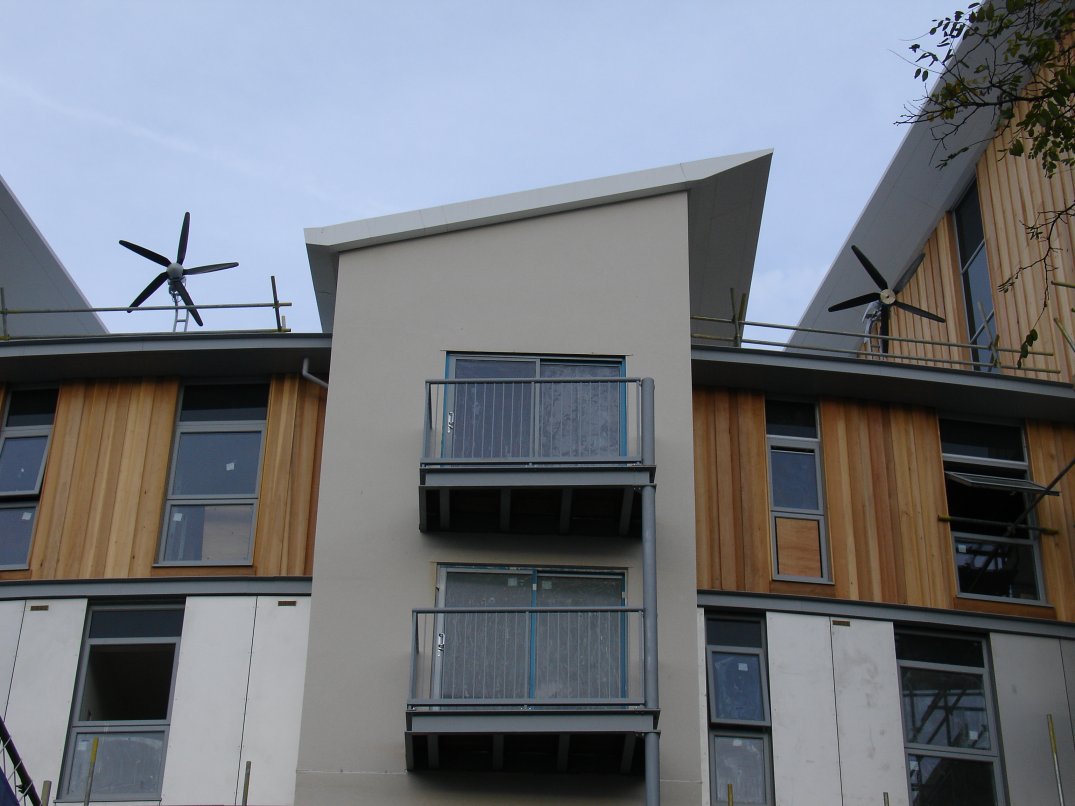 Over the last year I have watched apartment blocks being erected. Walking past a couple of days ago I noticed looking down at me like modern-day gargoyles a row of wind turbines. Cosmetic window dressing, an exercise in futility, as functional they are not.

What struck me as I have watched the apartments being built is that there is extensive south-facing roof area, and yet no use has been made of this roof area for solar energy collection, either for water heating or electricity generation! The roof should have been covered with amorphous silicon roof tiles or slates, converting the entire south-facing roof areas into a solar-power generator, powering the apartments, with the surplus electricity fed into the grid.

Curious, I went back the next day to make inquiries and investigate further.

I spoke with the marketing suite, who directed me onto the site. I wandered around the site. From what observed and those I spoke to, the wind turbines are mere window dressing. There are higher blocks further into the site, but these were not used for the wind turbines. They are in their location because they are visible from the main road!

What I found was an opportunity lost. The site is on a gentle south-facing slope. Ideal for buildings to be passively heated, but no advantage taken of what the site offered. No use made of heat pumps, no solar arrays on the roofs or integral to the roofs. Two of the blocks are heated centrally, but not by a combined heat and power plant.

The wind turbines were shipped in from the States!

We learnt in the 1960s not to house social housing tenants in blocks. Those same mistakes are being repeated all over again. The developer has not been able to sell the apartments, 40% have been sold to a housing association, I was told these are inferior apartments, all housed in the same block. I hate to think what this little estate will be like in ten years time with bored kids and angry teenagers hanging around.

Access to the site was very dangerous. An accident waiting to happen. I was almost run down.

Much can be done with new buildings to make them energy efficient and net power generators, but it is not being done. This is due to lack of vision by architects and builders, but also to blame are local planning authorities whose level of competence goes little beyond the siting of a garden shed.

Local generation is important. A development of this scale should have had on site a local combined heat and power plant running off natural gas, feeding the apartments with hot water and electricity, any surplus electricity generated fed into the national grid. The ground floor apartments could have been fed by ground-source heat pumps, the top apartments with roof-top solar collectors.

We need community-owned wind turbines, powering local communities, with the surplus fed into the national grid. It is a moot point whether or not this site could have had its own wind turbine, as it is on a slope running down into a dip, but they could have invested in a nearby community wind turbine.

No development should be permitted unless it is carbon neutral, furthermore, it should be a net generator of carbon-neutral electricity and low-grade heat.