Families and Friends at Downing St

Families and Friends of those who have died in suspicious circumstances in custody held a demonstration opposite Downing St in London calling for justice and for properly independent investigations into deaths of people in the care of police and prison offers. Saturday 31 October 2009. 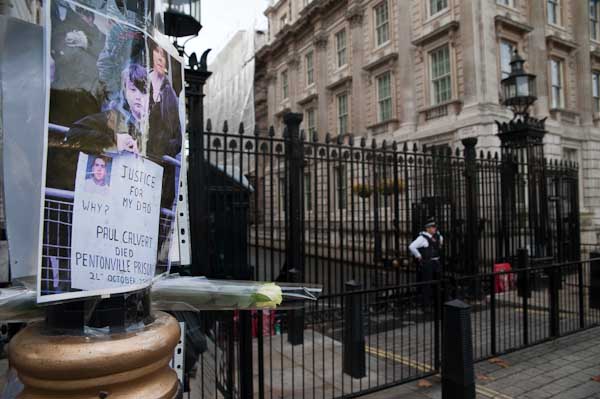 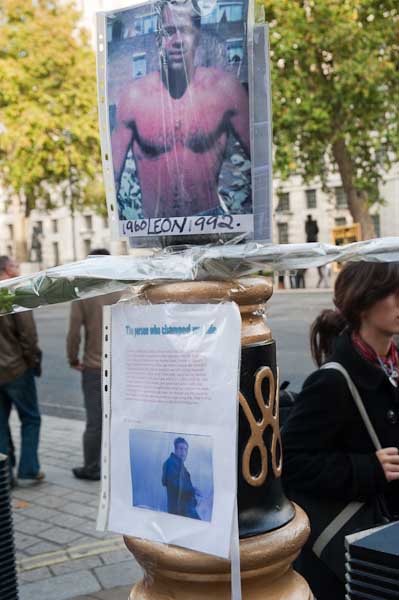 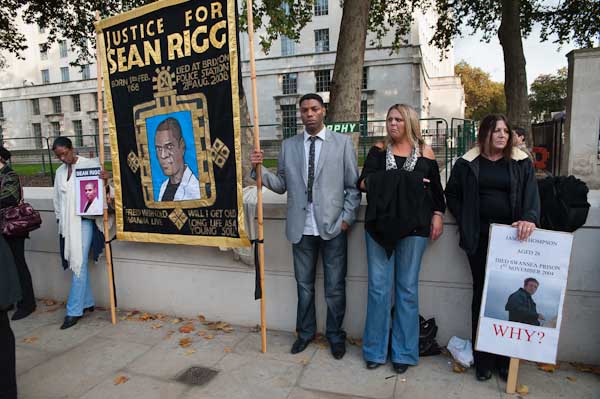 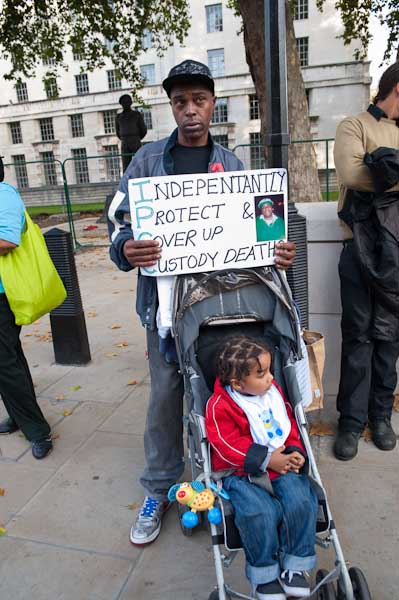 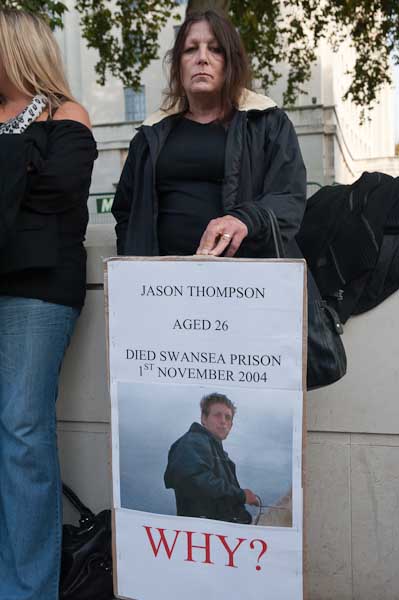 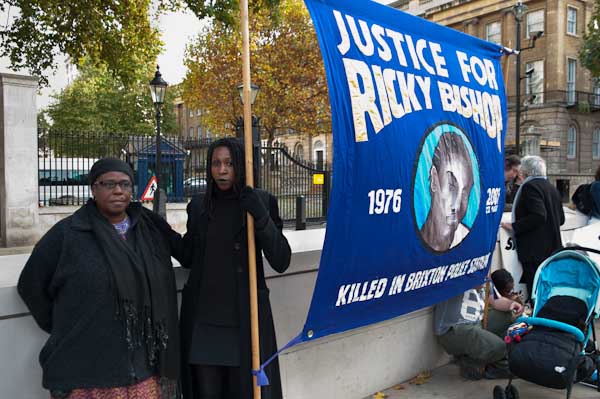 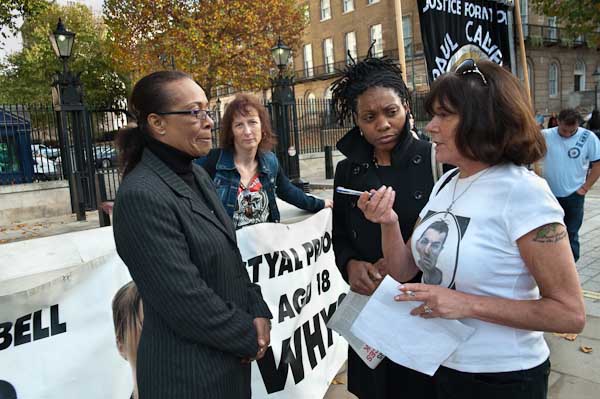 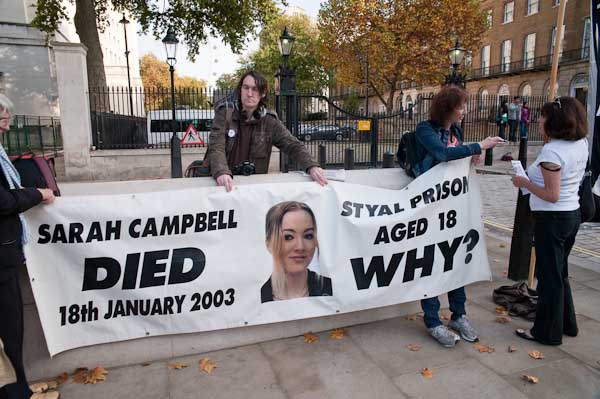 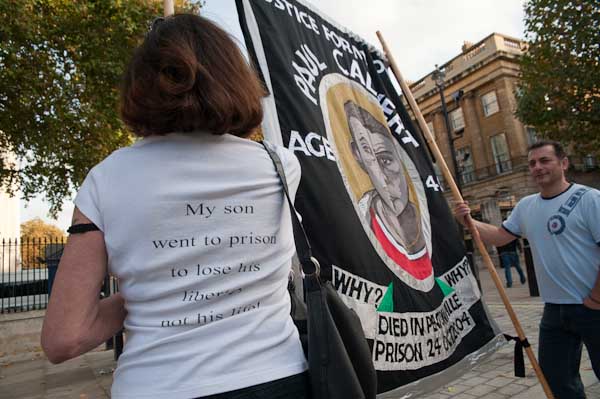 Over the past years, the march by the 'United Friends and Families' of those who have died in suspicious circumstances in police custody, prison and 'secure' mental health facilities has become an annual event, making its way at a funereal pace in silence inch by inch down Whitehall to halt outside Downing Street for an angry protest before continuing noisily to a final rally in Parliament Square.

At last year's event a large banner was carried with 2500 names of those known to have died over the years, including 182 in the previous year, and among those taking part were the mother and other family members of Jean Charles de Menezes. It seemed then an added insult that the police insisted on searching all the bouquets before allowing them to be laid at the gates of Downing St in what I described as "a surreal manifestation of anti-terrorist paranoia."

A decision was made not to hold a march this year, but it was suggested that some of the families might meet to hold a demonstration, and on Saturday afternoon a number of them came to Whitehall for a protest opposite Downing St.

Although some of the cases would appear to have involved deliberate acts of violence and others a woeful lack of the care required, those responsible for these deaths have seldom been brought to justice or even reprimanded for their actions. Where investigations have been held, they have often been seen largely as ineffectual or designed to cover up offences committed by police and prison officers.

Among those present were the family of Sean Rigg, who died after being taken ill in police custody in Brixton Police Station on Thursday 21 August 2008, and Ricky Bishop died in the same police station after being arrested during "Operation Clean Sweep" on November 22, 2001, an action described by some as a "modern day lynching."

I first photographed Pauline Campbell a few months after the death of her daughter in Styal prison in 2003, and was deeply moved. She went on to devote the rest of her life to a campaign not just for justice for her daughter but on behalf of all prisoners, particularly women in prison. I got to know her better after photographing her being assaulted by a police officer at a demonstration outside Holloway Prison after the death there of 24 year old of Jaime Pearce, the eighth woman to die in jail in 2007, after which we exchanged many e-mails. Her own suicide, at her daughter's graveside in May 2008, moved me strongly, and I felt something of this again at seeing the banner with her daughter's image.

On a lamppost on the opposite side of the road, right in front of the Downing Street gates the families had taped a single rose and A4 sheets about three of those who have died. One was simply a photograph of a healthy, athletic looking young man with the caption 1960 LEON 1992.

Below it on a sheet above a photograph of another young man, Jason Thompson, who died in Swansea prison at the age of 26 five years ago on 1 Nov 2004, was a story written by an eleven-year-old girl that brought tears to my eyes, "The person who changed my life." Here is a part of it:

"In 2004 my brother died in prison, but he wasn't suppose to be in prison, the police had got the wrong person it was suppose to be my brother's friend. I was only 6 when Jason (my brother) died. I went to Jason's funeral because he was my big brother and while I was at the funeral I cried and cried and cried. After the funeral I was still crying basically every day, even now I still get up set... He changed my life when he died it made me feel like there was a hole in a part of my life. That's what happens when someone you love dies, it is the worst feeling ever."

On the opposite side of the post was a picture of the mother of Paul Calvert and his son at a demonstration, holding a picture with a photograph of his father and the words "Justice for my Dad. Why? Paul Calvert died Pentonville Prison 24 October 2004."

Paul Calvert was 40, and although the original charges made against him had been dropped he was arrested for being in breach of his bail conditions. Two days after being put into Pentonville he hanged himself. He had actually pressed the emergency button for help, but the alarm bell had been taped over to mute it and the warning light outside the cell was ignored for 40 minutes, allegedly because the officer in charge was playing Backgammon.

Across the road, his mother was holding a banner calling for 'JUSTICE FOR MY SON" and on the back of her t-shirt was the message "My son went to prison to lose his liberty not his life!"