March and Protest against Novartis in Horsham

We were very pleased that approximately 70 people turned out for our demonstration and march against Novartis in Horsham on Saturday .

Up until 2pm the day before we were not even sure that the demonstration would be able to take place, as Novartis had attempted to get an interim injunction. Novartis were seeking to prevent banners on the demonstration from bearing the words "Novartis", or carry posters showing images of animal suffering. They didn't want protesters to be able to wear masks or costumes; in particular blood stained lab coats. They did also mention something about fireworks! 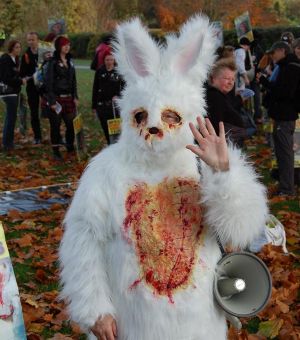 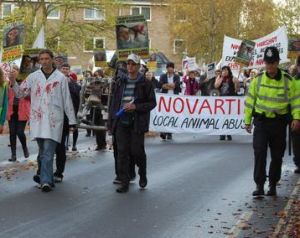 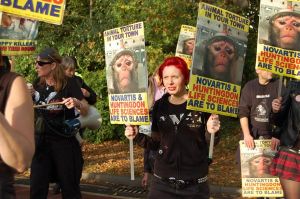 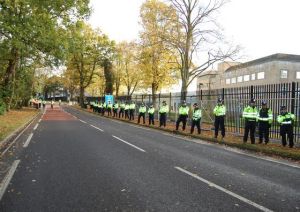 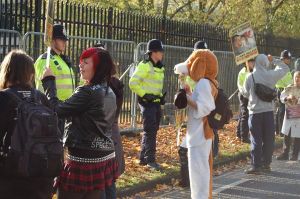 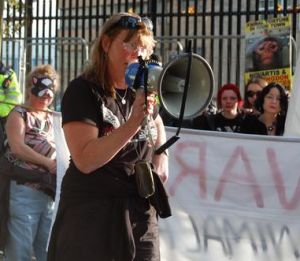 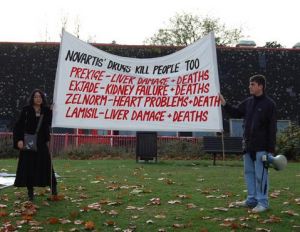 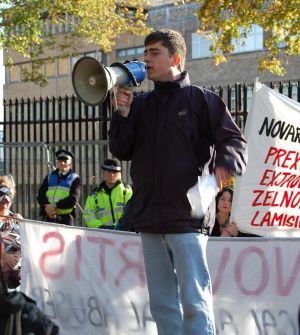 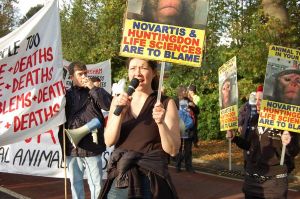 Despite the best efforts of solicitor Tim Lawson-Cruttenden to dredge up any dirt he could to support his application, the judge found in our favour and said "At this late and interlocutory stage it seems to me that the balance is resoundingly against the suggested requirement that protestors must not wear blood splattered clothing or costumes". He went on to say that stopping people wearing masks would involve "considerable practical problems for the Police, risk the raising of tensions, and interfere with the rights of those who simply wish to wear inoffensive masks".

So, the demo went off very well, was extremely loud and the public seemed genuinely interested in our protest and took our leaflets with enthusiasm. In the last week we have handed out 1,000 leaflets which tell the people of Horsham that Novartis torture and kill animals and their drugs damage and kill people too.

We would like to thank the police for the considerable number of officers that were present on the march as well as the 50 or so, plus police horses, that were waiting for us to arrive at Novartis itself! We appreciate them trying to make up the numbers, but it wasn't necessary. We caused just as much time, energy and money and inconvenience as if there had been 1,000 of us.

We feel quite pleased with ourselves that a group consisting of only 6 people can cause this level of aggravation to a company the size of Novartis.

What is abundantly clear is that Novartis really, really, do not like being associated with animal experiments. Quite rightly they know that most people find vivisection disgusting and immoral. With this in mind our group is busy, as we write, producing more banners and posters to add to our weekly demonstrations, which from now on will take place not only outside Novartis, but also in HORSHAM town centre as well.

Our message to Novartis, We will never give in, we will continue to tell the truth about your dirty, bloody business and if you don't like it, bring it on......

PS After the march the police went into the George pub in Brighton and told the landlord that animal rights people were going to be meeting there and watch out for trouble! They said they would be back later to check, which they did. Shame they didn't have something better to do........

A really inspiring demo organised by a new local group! Following the success of the recent Newcastle demo I look forward to seeing (and taking part in) many more larger demos organised by local groups! This is the way ahead.

Excellent report. Well done to everyone that turned up (and also to them that did at many other sites of animal torture all over the UK at the weekend)

Good on you SAFA

Evidently despite NETCU bragging, the 'threat' of animal rights activists never went away. A local group highlighting the abuse of animals in their area evidently scares the managers of Novartis so much so that they order the police to provide maximum security. You can tell your campaign is having an impact when they try everything possible to stop you be that via the courts or by dragging the police out of the station and onto the streets.

There was a good turn out at the many demos all over the country that were occurring that day. And it's certainly showing the police and industry that we will not go away despite arrests and imprisonment.

Congrats to all involved.

Austrian journalist, Jane Burgermeister, recently filed criminal charges with the FBI against the World Health Organization (WHO), the United Nations (UN), and several of the highest ranking government and corporate officials, including Barack Obama & the Rothchilds, concerning bioterrorism and attempts to commit mass murder. She has also prepared an injunction against forced vaccination which is being filed in America. These actions follow her charges filed in April against Baxter AG and Avir Green Hills Biotechnology of Austria for producing contaminated bird flu vaccine, alleging this was a deliberate act to cause and profit from a pandemic.

In her charges, Burgermeister presents evidence of acts of bioterrorism that is in violation of U.S. law by a group operating within the U.S. under the direction of international bankers who control the Federal Reserve, as well as WHO, UN and NATO. This bioterrorism is for the purpose of carrying out a mass genocide against the U.S. population by use of a genetically engineered flu pandemic virus with the intent of causing death. This group has annexed high government offices in the U.S.

Specifically, evidence is presented that the defendants, Barack Obama, President of the U.S, David Nabarro, UN System Coordinator for Influenza, Margaret Chan, Director-General of WHO, Kathleen Sibelius, Secretary of Department of Health and Human Services, Janet Napolitano, Secretary of Department of Homeland Security, David de Rothschild, banker, David Rockefeller, banker, George Soros, banker, Werner Faymann, Chancellor of Austria, and Alois Stoger, Austrian Health Minister, among others, are part of this international corporate criminal syndicate which has developed, produced, stockpiled and employed biological weapons to eliminate the population of the U.S. and other countries for financial and political gain.

The charges contend that these defendants conspired with each other and others to devise, fund and participate in the final phase of the implementation of a covert international bioweapons program involving the pharmaceutical companies Baxter and Novartis. They did this by bioengineering and then releasing lethal biological agents, specifically the "bird flu" virus and the "swine flu virus" in order to have a pretext to implement a forced mass vaccination program which would be the means of administering a toxic biological agent to cause death and injury to the people of the U.S. This action is in direct violation of the Biological Weapons Anti-terrorism Act......

Donate:
Jane has (of course) been fired from her job. If anyone is interested in helping her financially with her fight (she is fighting for all of us)... you can send her donations via paypal (account email:

Read more at:
About the fight against WHOs mandatory killer vaccines

Virus mix-up by lab could have resulted in pandemic: