Venezuela: The error of being Lusbi Portillo

* The latest demonstration of political criminalization of autonomous social movements by the Venezuelan government is exposed by Rafael Uzcategui, a member of the anarchist collective El Libertario. 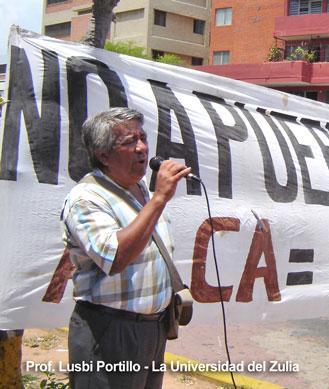 As this text is written, Lusbi Portillo, professor at Zulia University (in Maracaibo) and environmental activist in solidarity with the indigenous movement is in hiding to protect his life and physical integrity. During the events of October 13 in the Sierra de Perijá two yukpas were killed and five more wounded in a conflict arising from the demarcation of indigenous land. The regional police announced that an arrest warrant against the professor for “drug possession” was imminent. This is not the first time the professor is criminalized for his active solidarity with the demands of the original peoples, but because the way the events are evolving – an investigation of the events has been decreed “national security” by the authorities – he decided to take preventive measures by going into hiding.

The environmental activist increased his activities in the indigenous struggle as a reaction to the government’s announcement, by the President of the Republic on November 13 2003 to triple coal exploitation in the Zulia region to 36 million metric tons per year. Lusbi Portillo’s first “error”, from the point of view of the immobilizing polarization that controls the nation’s political scene, was to uphold his values and demands in spite of the official discourse that promised to satisfy them some time in the future. Regardless of his expectations and personal sympathies, Portillo did not sell out nor agreed to lower his priorities, preserving his autonomous social character, thus keeping his ability to organize for the solution to the problems in spite of the electoral situation.

The second “error” of Lusbi Portillo was to think with his own head. In contrast with other intellectuals and members of the academic world whose discourse has been diluted to the level of the polarity government- opposition, Portillo mixes elements of research and activism in order to generate a line of thought that motivates him to act consequently. In this way he has been able to diagnose the roots of public and private policies that impact nature and the way of life of the original peoples with a correct appraisal of the consequences of Venezuela’s progressive coupling with the main tendencies of the globalized economy. Thus he relates the development plan promoted for the Zulia region within the project South American Regional Infrastructure Initiative (IIRSA in Spanish), whose objective is to optimize the flow of energy resources and increase regional competitiveness to satisfy international demand. In many documents and conferences Portillo has demonstrated that the IIRSA, a project conveniently silenced by the limited and polarized debate, represents the reverse side of the coin of a policy publicly condemned by the current government: the Free Trade Agreement of the Americas (ALCA in Spanish). This sharp analysis of the increasing role assigned to the nation by the main global economic actors, which includes other supposedly “endogenous” development activities such as Puerto America, the Southern Gas Pipeline, the exploitation of the Imataca preserve and the development of the Orinoco-Apure axis, allows us to see what is really behind the anti-capitalist rhetoric proclaimed by the current occupant of Miraflores Palace.

A third “error” of Lusbi Portillo is that, in the framework of his immediate demands – the preservation of the environment and the rights of the indigenous people- he has established links and relations with all kinds of grass roots initiatives, whose precondition is not how they define themselves to President Chavez but rather their degree of solidarity with nature and the original indigenous communities. This way Portillo has been the center of a social network of variable geometry that, in spite of conflicts and fluctuations, has been able to develop one of the few instances in the country whose development has resisted the usual Manichaeism in order to build and express its own perspective, setting an example of how to disassemble the demagogy of those who feed the false dichotomy “Chavism vs. anti-Chavism” in order to domesticate the social struggles and build up to the electoral process.

The former “failings” condemn Lusbi Portillo to ostracism and isolation, precisely one of the objectives of any policy that criminalizes belligerent and independent protests by the social activists. After being repeatedly threatened with warnings, two women, the attorneys Luisa Ortega Díaz (the Republic’s Attorney General) and Gabriela Ramírez (People’s Defender) will be responsible for any attempt on the freedom, personal integrity and even the life of Lusbi Portillo, an activist whose major error has been to maintain his old ideas in a time marked by opportunist ethics and values degraded by the air conditioner. Solidarity with Lusbi Portillo.