ELP has learnt of an arrest in Mexico where a 16 year old is accused of ELF activity. Below is a report about his arrest. If anyone knows the 16 year old and have contact details for him please contact ELP. 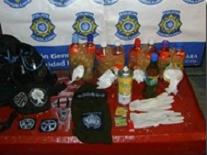 Last 27 of October a 16 years old Mexican activist was arrested at night and acused of being part of the ELF. He was riding his bike with a back pack wen a police patrol started to follow him. He decided to get rid of the backpack and ran away with his bike. Sadly the cops managed to capture him. Afterwards they took the backpack and found 4 incendiary devices (each one made with two petrol bottles), another petrol bottle, a pair of plastic gloves, a balaclava, a lighter, a spray can, and environmentalists logos (see picture above).

He was sent to the police station were the police took pictures of him and found out that he is vegan. He was kept there all night and next morning. He refused to talk to the police or explain why he was carrying all that stuff in his backpack.

According to the press he is suspected of carrying out at least 6 attacks, 5 of them with incendiary devices.

According to the press Diego A, the arrested activist, admited to be Anarchist, part of the ELF and responsable of the 6 attacks. But according to the Mexican Animal Rights magazine Rabia y Acción, this seems to be false.

Last 29 of October he went to trial but the judge didnt find enought evidence to convict him in a special prison for young men under 18 years old, so he was released. Now his parents are responsable of his future behaviour.