We succeeded in laying a white wreath on the Luton War Memorial on Sunday 8th November. 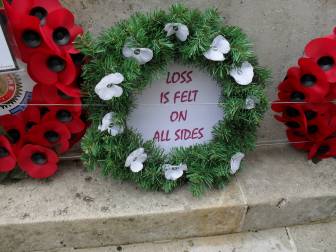 Yesterday, Sunday 8th Nov’ 2009, at the Luton War Memorial, our group of pacifists took part in the Luton Remembrance Service outside the Town Hall, alongside the representatives of the armed forces and local dignitaries.

After taking part in the Luton Mayor’s procession, Debby Wakeham and Marc Scheimann laid the White Poppy Wreath (as below) as our mark of respect for all the fallen on all sides of wars this country has been involved in.

We believe in respecting the loss of people from all communities, so before the Service began, the Luton for Peace contingent spoke to Luton’s Mayor, Mohammed Riaz, when we suggested that the service should include representatives from Commonwealth countries, 1.3million of whom lost their lives during the World Wars helping the British to win the war. He said it was something we needed to look into.

For anyone who wants white now or for next year contact Luton For Peace or the Peace Pledge Union.