Omali Yeshitela, leader of the Uhuru Movement and Chair of the Black is Back Coalition for Social Justice, Peace and Reparations is traveling with a delegation to Freetown, Sierra Leone November 13. Yeshitela will be an observer and speaker at the historic launch of the African People’s Socialist Party in West Africa. 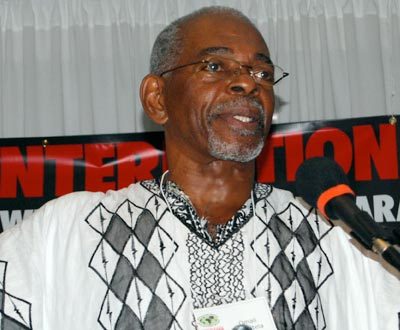 Yeshitela is making his trip just days after the successful Black is Back-led march in Washington DC on November 7. Several hundred people joined that march which called for an end to U.S. wars and occupations against oppressed people around the world and inside the U.S.

As the Chairman of the worldwide organization known as the African Socialist international Yeshitela will be hosted by former child soldier, journalist and activist Chernoh Alpha M. Bah, leader of the Africanist Movement of Sierra Leone which has now voted to become the African People’s Socialist Party-Sierra Leone.

Sierra Leone is one of the most impoverished countries in the world even though it produces some of the planet’s largest and most beautiful diamonds. The country was ravaged in the late 90s by an internal war backed by foreign interests for control of the country’s resources.

The launch of the African People’s Socialist Party in Sierra Leone marks the first officially registered political party led by and benefiting the masses of African workers and peasants in Sierra Leone’s history. Some of the themes of the conference will be “One Africa! One Nation!” and “Africa’s Resources for African people!”

Yeshitela and his delegation will be in Sierra Leone for 13 days of events that include the African People’s Socialist Party founding conference November 16 through 18.

Other scheduled activities include the gala launching of the Oloshoru community fishing project and the opening of Africa’s first community-owned radio station in the town of Makeni. Yeshitela will also give a lecture to the students at Fourah Bay College in Freetown.

Yeshitela’s delegation includes black leaders and activists from the U.S. and Britain as well as white supporters of these historic events.