One false and contradictory claim after the next was disseminated last night by the establishment media with regard to the core facts of the Fort Hood shootings.

Perhaps most irresponsible of all is the unverified claim that Hasan had written on the Internet in defense of suicide attacks by Muslims, even though the origins of those writings are entirely unverified. Similarly, certain news organizations -- like NPR -- used anonymous sources to disseminate inflammatory claims about Hasan's prior troubles allegedly grounded in activism on behalf of Islam. 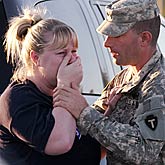 Much of the initial coverage turned out to be wrong. Is there anything wrong with that?

Upon reading that, I went to Hot Air to read what he had written, and it's actually quite revealing -- not in terms of what it reveals about Hot Air (that topic wouldn't warrant a post) but, rather, what it reveals about major media coverage of these sorts of events. Allahpundit's post consists of a very thorough, contemporaneous, and -- at times -- appropriately skeptical chronicling of what major media outlets were reporting about the Fort Hood attack, combined with his passing along of much unverified gossip and chatter from Twitter, most of which turned out to be false.

It's worth focusing on what the major media did last night, and one can use the Hot Air compilation to examine that. I understand that in the early stages of significant and complex news stories, it's to be expected that journalists will have incomplete and even inaccurate information. It's unreasonable to expect them to avoid errors entirely. The inherently confusing nature of a mass shooting like this, combined with the need to rely on second-hand or otherwise unreliable sources (including, sometimes, official ones), will mean that even conscientious reporters end up with inaccurate information in cases like this. That's all understandable and inevitable.

But shouldn't there be some standards governing what gets reported and what is held back? Particularly in a case like this -- which, for obvious reasons, has the potential to be quite inflammatory on a number of levels -- having the major media "report" completely false assertions as fact can be quite harmful. It's often the case that perceptions and judgments about stories like this solidify in the first few hours after one hears about it. The impact of subsequent corrections and clarifications pale in comparison to the impressions that are first formed. Despite that, one false and contradictory claim after the next was disseminated last night by the establishment media with regard to the core facts of the attack. Here are excerpts from Allahpundit's compilation, virtually all of which -- except where indicated -- came from large news outlets:

The fact that at least three gunmen are involved already has Shuster and Miklaszewski mentioning similarities to the Fort Dix Six plot on MSNBC . . . two of the gunmen are still at large and one has fired shots at the SWAT team on the scene . . . . New details from CNN: One gunman "neutralized," one "cornered," no word on the third. . . . Whether there are two shooters or three seems to be in dispute at the moment, but there’s certainly more than one: The second shooting on the base evidently occurred at a theater. . . . Fox News says there are reports that the men were dressed in fatigues. . . . MSNBC TV says two shooters are in custody now. . . . it sounds like both shooters are military . . .According to MSNBC, there were three shooters. . . In case you're wondering whether the other two soldiers in custody were actual accomplices or just being questioned because they knew Hasan, Rick Perry just said at the presser he’s holding that all three were shooters. . . . Hearing rumblings on Twitter right now that Perry was wrong and that the two other "suspects" have now been released. Was Hasan, in fact, a lone gunman? . . . . According to the general conducting the briefing going on right now, he appears to be a lone gunman.

The fate of the shooter

One of the shooters is dead. . . One is dead, two more are in custody. Has there ever been a case of "battle stress" that involved a conspiracy by multiple people? . . . So poor and fragmented have the early media reports about this been that only now, after 9 p.m. ET, do we learn that ... Hasan’s still alive. He’s in stable condition.

M-16s involved: . . . From the local Fox affiliate, how it all went down. Evidently McClatchy’s report of M-16s was wrong:

According to Brian Ross at ABC, Hasan was a convert to Islam. . . . Contra Brian Ross, the AP says it’s unclear what Hasan’s religion was or whether he was a convert. . . . Apparently, one of Hasan’s cousins just told Shep that he’s always been Muslim, not a recent convert. . . .

I’m hearing on Twitter that Fox interviewed one of his neighbors within the last half-hour or so and that the neighbor claims Hasan was handing out Korans just this morning. Does anyone have video? . . . . "Brenda Price of KUSJ reported to Greta at 10:33: 'also, the latest I am hearing, this morning, apparently according to his neighbors, he was walking around kind of giving out his possessions, giving away his furniture, handing out the Koran...'" . . .: Evidently CNN is airing surveillance footage from a convenience store camera taken this just morning showing Hasan in a traditional Muslim cap and robe. . . "A former neighbor of Hasan’s in Silver Spring, Md. told Fox News he lived there for two years with his brother and had the word ‘Allah’ on the door."

Good lord — there’s a report from BNO News on Twitter that new shooting is being heard on the base. . . . For what it’s worth, an eyewitness report of Arabic being shouted during the attack: . . .Federal law enforcement officials say the suspected Fort Hood, Texas, shooter had come to their attention at least six months ago because of Internet postings that discussed suicide bombings and other threats. . . . The $64,000 questions: What was he doing at Fort Hood among the population if he thought suicide bombers were heroes?

Isn't it clear that anyone following all of that as it unfolded would have been more misinformed than informed?

The New York Times' Robert Mackey did an equally comprehensive job of live-blogging the media reports, and his contemporaneous compilation reflects many of these same glaring errors in the coverage: "CNN reports that two military sources say that the second gunman at Fort Hood is 'cornered' . . . Senator Kay Bailey Hutchison told Fox 4 News in Texas that one shooter was in custody and 'another is still at large' . . . CNN’s Pentagon correspondent Barbara Starr reports that 12 people have been killed and up to 30 wounded. One of the dead is said to have been one of the gunmen. . . . Lt. Gen. Robert Cone, just revealed that earlier reports that the suspected gunman, Major Nidal Hasan, had been killed were incorrect. Major Hasan was wounded but remains alive."

Perhaps most irresponsible of all is the unverified claim that Hasan had written on the Internet in defense of suicide attacks by Muslims, even though the origins of those writings are entirely unverified. Similarly, certain news organizations -- like NPR -- used anonymous sources to disseminate inflammatory claims about Hasan's prior troubles allegedly grounded in activism on behalf of Islam. Much of this may turn out to be true once verified, or it may not be, but all of the conflicting, unverified claims flying around last night enabled many people to exploit the "facts" they selected in order to create whatever storyline that suited them and their political preconceptions -- and many, of course, took vigorous advantage of that opportunity.

I'm obviously ambivalent about the issues of media responsibility raised by all of this. It's difficult to know exactly how the competing interests should be balanced -- between disclosing what one has heard in an evolving news story and ensuring some minimal level of reliability and accuracy. But whatever else is true, news outlets -- driven by competitive pressures in the age of instant "reporting" -- don't really seem to recognize the need for this balance at all. They're willing to pass on anything they hear without regard to reliability -- to the point where I automatically and studiously ignore the first day or so of news coverage on these events because, given how these things are "reported," it's simply impossible to know what is true and what isn't. In fact, following initial media coverage on these stories is more likely to leave one misled and confused than informed. Conversely, the best way to stay informed is to ignore it all -- or at least treat it all with extreme skepticism -- for at least a day.

The problem, though, is that huge numbers of people aren't ignoring it. They're paying close attention -- and they're paying the closest attention, and forming their long-term views, in the initial stages of the reporting. Many people will lose their interest once the drama dissolves -- i.e., once the actual facts emerge. Put another way, a large segment of conventional wisdom solidifies based on misleading and patently false claims coming from major media outlets. I don't know exactly how to define what the balance should be, but particularly for politically explosive stories like this one, it seems clear that media outlets ought to exercise far more restraint and fact-checking rigor than they do. As it is, it's an orgy of rumor-mongering, speculation and falsehoods that play a very significant role in shaping public perceptions and enabling all sorts of ill-intentioned exploitation.