The Road to a New Movement Begins: Black is Back Coalition

“Somebody had to stand up and say the emperor had no clothes, and it was our responsibility as African Americans more than any other people in the world,” said Omali Yeshitela, chair of the Uhuru Movement and top organizer of the Black is Back Coalition for Social Justice, Peace and Reparations. The emperor is, of course, President Barack Obama. 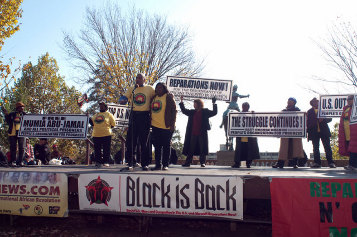 Just two months after the call went out, the revived Movement was off to a spirited start, galvanized by Obama's corporate policies and the “most acute crisis of capitalism in four generations.” As one former Obama supporter told the crowd at Washington's Malcolm X Park, “To have a black person exploiting me just like a white person, that's no easier pain to bear.”


The Road to a New Movement Begins: Black is Back Coalition

“Somebody had to stand up and say the emperor had no clothes, and it was our responsibility as African Americans more than any other people in the world,” said Omali Yeshitela, chair of the Uhuru Movement and top organizer of the Black is Back Coalition for Social Justice, Peace and Reparations. The emperor is, of course, President Barack Obama. “Obama is White Power in a Black face, neocolonialism on steroids,” Yeshitela told the crowd of about 200 activists at Washington, DC’s Malcolm
X Park, last Saturday.

The numbers were modest, but morale was high. The gathering had been pulled together on a non-existent budget in the eight short weeks since a September 12 meeting in a living room on Georgia Avenue, in Washington. Initially centered on the Uhuru organization, the project quickly grew into a genuine coalition rooted in progressive political principles and guided by the proposition that the times demand a Black-led movement for social transformation and peace. “Black is Back” meant that at least some African Americans are determined to reassume those historic responsibilities.

Barack Obama’s presidency forced the issue. Independent Black politics had been eroding for decades, ground down by corporate influences and the centrifugal forces generated by mass Black incarceration. The Obama presidency, the ultimate corporate intrusion on Black political consciousness, coincided with the most acute crisis of capitalism in four generations. For the remnants of a once-powerful Black movement movement, the question was simple: If not now, when?

“Independent Black politics had been eroding for decades, ground down by corporate influences and the centrifugal forces generated by mass Black incarceration.”
“This event is like a fire alarm, a rally against confusion, against delusion, against paralysis,” said Larry Holmes, of the Bail Out the People Movement. It is time for serious and sober activists to return to the basics of speaking Truth to Power. “A Black president is not a Black liberation movement, it is not a workers movement, nor is it a movement to end these racist wars.” Real organizers need to build real movements, and November 7th was a beginning.

Obama had recently given great aid and comfort to New York City’s richest man, Mayor Michael Bloomberg, in his $100 million campaign for a third term. The president, who had only a month before gravely wounded the Black governor’s career chances by demanding David Paterson not run for election in 2010, proceeded to blackball the city’s Black mayoral candidate, Bill Thompson. Obama refused at first to even mention Thompson’s name, while praising the billionaire mayor. Bloomberg won by only five percent, a gap that could have been overcome by aggressive intervention by the White House.

“Barack Obama, mid your business and stay out of New York City,” shouted Councilman Barron, until recently an Obama supporter. “You throw Black men under the bus. We were this close to getting Bloomberg out of office.”

The Black is Back Coalition was built on the theory that, if you plant a flag of dissension from Obama’s corporate policies and Black-disdaining behavior, the best activists will rally to that flag. The theory works. “To have a black person exploiting me just like a white person, that's no easier pain to bear,” said Councilman Barron. “If you can bail out Wall Street, you can bail out 125th Street.”

Larry Hamm had marshaled a busload of activists from his Newark-based Peoples Organization for Progress (POP). “Our people are suffering more in November of 2009 than they were in November, 2008,” said Hamm, the preeminent Black organizer in northern New Jersey. Hamm rolled off a list a young African Americans fatally injured by police, declaring, “Black men are being tortured right here in the jails of America.”

Rather than hold “beer summits” with the police officer than arrested Black professor Louis Gates, the president focus on prosecuting police that profile and abuse Black people. “They’ve got an affirmative action program for us. It’s called the criminal injustice system.”

Cindy Sheehan, the white anti-war mover-and-shaker and Gold-Star Mother, was delighted to be among activists that weren't in awe of Obama. “I thought people were hope-notized,”she said, playfully. “These wars were started under idiot Bush. Now we have a Justice Department that is protecting George Bush.” Why is Barack Obama rewarded simply for not being Bush? “Anybody in this park is better than George Bush, so why don't we stand up for people like sister Cynthia McKinney?” Everyone present knew the answers to Sheehan's rhetorical questions.

Alex Moore brought greetings and solidarity from the Bahamas. “In 2009,” said the writer and community activist, “we have an entirely Black government, but nothing has changed” since the colonial period. “White Power is still alive and well in the Caribbean.”

The white presence also increases in the “chocolate cities” of the United States. Nellie Bailey, executive director of the Harlem Tenants Council, blamed “predatory landlords” for the fact that “Harlem is losing Black population, just as you are losing your Black population here in Washington, DC.”

No renewed Black movement can succeed without cleaning out the accumulated rot of the old. “In New York City,” said Bailey, “we will go nowhere unless we take on Al Sharpton, who got millions from Bloomberg. Bloomberg then brags to whites that ‘We’ve got these Negroes under control and we’re driving them out of the city.’”

Heads turned as the procession marched spiritedly down 14th Street, startled at the boldness of the activists’ chants: “Barack Obama works for the white man, it’s time for a revolutionary program!” “No more Wall Street bailouts.” Older organizers marveled at the relative youth of their fellow activists – a good omen and a welcome change.

At Lafayette Park, in front of the White House, Uhuru leader Omali Yeshitela reminded the crowd, “We want to establish a new political leadership [in Black America]. We have to build a movement for real change that we can believe in.”

The process has begun.

* BAR executive editor Glen Ford can be contacted at:

For updates on the Black is Black Coalition for Social Justice, Peace and Reparations, go to:

For speeches from Black is Back event, go to: